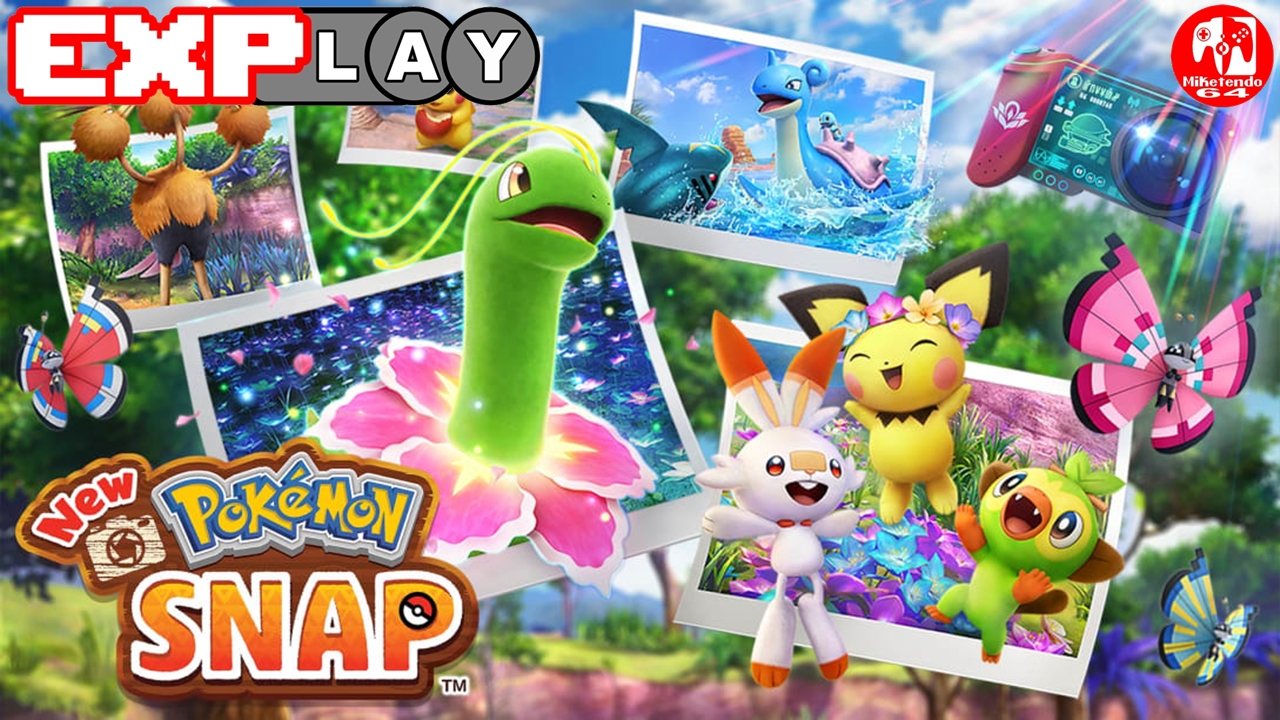 Welcome to EXPlay, (Explain & Play) the review series where we care not for scores but tell it how it is when it comes to every game we get our hands on, whilst also taking the time to include some lengthy gameplay, to give you the reader, the chance to shape your own impressions and views whilst watching and reading. In this installment, we’re covering New Pokémon Snap by developer BANDAI NAMCO Studios.

New Pokémon Snap is the newest instalment to a series that has been dormant for 22 years. Rather than catching every single pokémon in a ball, this game takes players on a journey around a nature reserve so they can take photographs of the critters instead.

Players take on the role of a Pokémon photographer who is tasked with helping Professor Mirror with his research of Pokémon in the Lental region. Mirror also has help from his assisstant, a young girl called Rita and between the two of them, they will explain to you how everything works, what you will see, where you will go, etc.

New Pokémon Snap expands upon much of what makes the original game so great. You are taken through each stage on an “on-rails” experience. The movement of the NEO-ONE capsule that you ride is automatic, meaning that you can concentrate fully on taking incredible pictures of Pokémon.

The whole point of the game is to take photographs of Pokémon but it isn’t a case of “One and done. Now let’s move on”. Oh no. You will be tasked with take photographs of each Pokémon multiple times, displaying unique behaviours, interacting with other Pokémon and more. At the end of each stage, whether you make it to the extraction point or run out of film for your camera, you can then have your photos evaluated by Professor Mirror.

You can choose as many photos as you like for Professor Mirror to evaluate as long as it is one per Pokémon. The photo will be given points in regards, pose, size, direction, placement, and if there are other Pokémon in the photo. You will then be given a total score and it will then be added to your photodex. If you have already have a registered photo of that Pokémon in your photodex, you will have the option to replace the photo with the newest photo you have taken.

There is also a star rank system from one star up to four stars that will allow you to have at least four photos of the same Pokémon registered in your photodex. How a photo is ranked with stars has no weight in how many points it gets, it merely indicates how unique or interesting the Pokémon’s behaviour is in the photo. The amount of points you do get for each photo will affect the color of the star to be bronze, silver, gold, or diamond.

The total points you earn for your photos on each run will tally to the amount of Expedition points you earn on each run. As you earn Expedition points, they can increase your Research Rank in each stage and open up more photo opportunities like new Pokémon making an appearance, new alternate paths or new Pokémon behaviours. Your Research Rank is set to each stage seperately, so even if you are Research level 3 in one stage, it will have no influence in your rank in another stage. You will have to earn Expedition Points in each stage to increase its rank.

Speaking of stages, the Lental Region is made up of six distinct areas; Florio (Nature Park), Belusylva (Jungle), Maricopia (Beach), Voluca (Volcano), Durice (Snow Fields), and Aurus (Ruins). Each has a primary route that the NEO-ONE adheres to but there are a number of alternate routes in some stages that can branch of into other areas. They require a sharp eye and scanning to find the access point so you can detour off the main path.

New Pokémon Snap has over 200 Pokémon for you to snap photos of. Though a good number of Pokémon are instinctly recognizable like Pikachu, squirtle, Bidoof, Scorbunny, and Lapras to name a few. There are also plenty of slightly obscure Pokémon to encounter as well. This game’s collection of Pokémon extends from Gen 1 all the way to a few representatives of Gen 8 so there are bound to be some Pokémon that make you say “Oh, yeah. I remember them. They are from Gen… (Insert Gen number here)“.

Getting the very best photographs of each Pokémon will require time, patience, a little bit of skill, but most importantly, the use of a well placed item or two. Fluffruit for example, are apple-like items that you can throw to bait Pokémon. You can also throw them at Pokémon to spark interesting reactions from them though we’re sure multiple animal rights associations would abhor this kind of behaviour (Not that we do either). Other items will become accessible as you play through the game like a flute and the illumina orbs.

The are a number of features in this game that the original never had, mainly due to the fact none of these features really existed then. Firstly is Motion controls. You can move your Nintendo Switch in handheld mode or your Joy-Cons/Pro Controller using gyro controls to move the camera on screen. it makes the controls feel much more fluid, especially with a game of this calibre.

The photo editing feature is also a welcome addition. You can resize, recenter any photos that you have saved to your album and even add cool stickers and borders to them to make them really stand out. You can also share these online and have people aroud the world rate them by given them a Sweet! Medal. You can also rate other people’s photos online as well.

New Pokémon Snap is a truly welcome return for the series and the extra features like the ability to edit & Share your photos with other people online and have them rate them will surely have players keep flocking back again and again. If you are a Pokémon fan or enjoy photography simulation games, you should definitely have this game on your radar, if not on your shelf already.