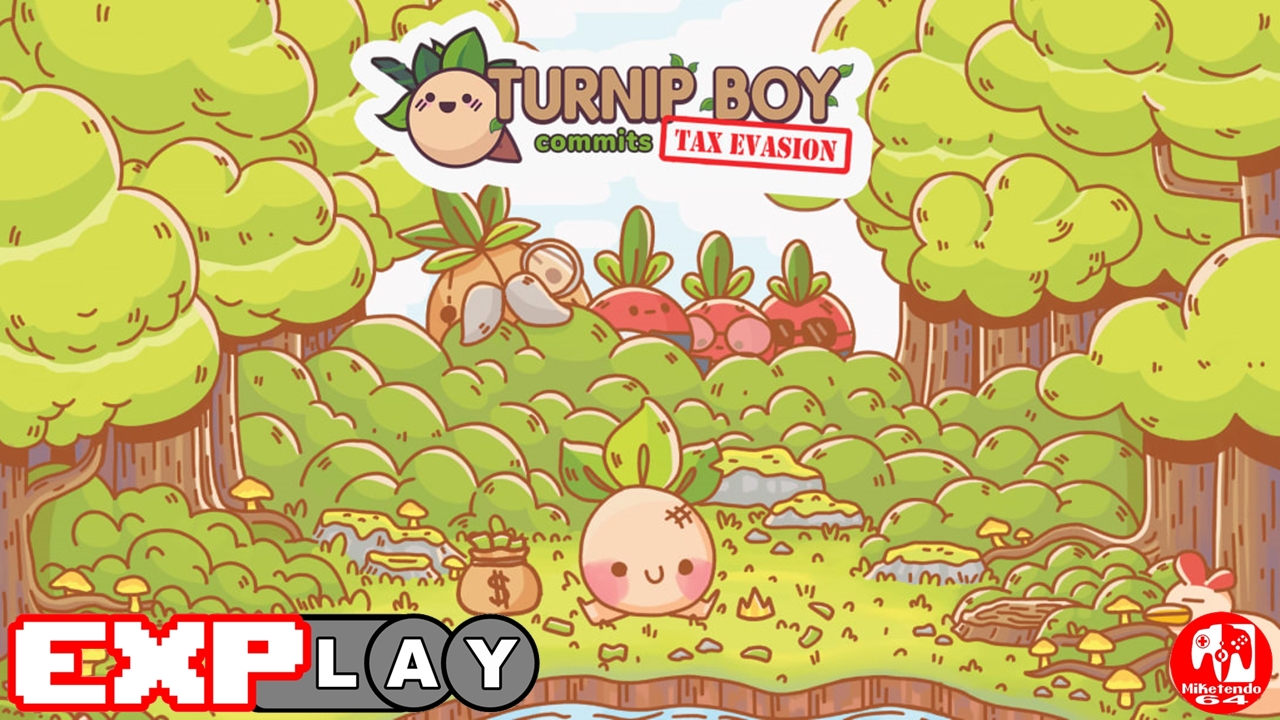 Welcome to EXPlay, (Explain & Play) the review series where we care not for scores but tell it how it is when it comes to every game we get our hands on, whilst also taking the time to include some lengthy gameplay, to give you the reader, the chance to shape your own impressions and views whilst watching and reading. In this installment, we’re covering Turnip Boy Commits Tax Evasion by developer Snoozy Kazoo.

Turnip Boy Commits Tax Evasion is inspired by the Yoshi evades paying taxes meme. It is a 2D pixel adventure game that plays similarly to a “The Legend of Zelda” game. The character plays the titular Turnip Boy who has to brave a number of dungeons in order to pay off his tax debt to Mayor Onion.

As I touched on before, Turnip Boy has racked up a large tax debt to Mayor Onion. In order to pay it back. Mayor Onion besets tasks to Turnip Boy to collect key objects for him. These objects lie in certain areas around the world in what we shall refer to as dungeons. As Turnip Boy makes his way through these dungeons, he will have to solve puzzles and fight a big bad boss waiting for him at the end.

There is a very horticultural theme throughout the game with the main character and NPC’s being sentient fruits and vegetables. The enemies are animals like Snails, worms, pigs and other herbivorous creatures. Some are relatively sluggish and follow a set movement pattern while others will pursue Turnip Boy if he is in their vicinity.In typical “Zelda” fashion, You can find items that will help you on your travels. Such items include a watering can, a sword made of soil, and a “Potted Petalportal” that will allow you to warp to another portal. There are also a number of items that once you collect them will work passively like the Boom Boots that will allow you to kick bomb plants called Boomblooms.

One thing that will trip up unbeknownst players is that the A and B buttons work differently to that in most other games. The B button is to accept and the A button is to go back or cancel. When it comes to using your soil sword to attack enemies or use the watering can, you can use the A button and depending on the direction you are holding the left joystick, it will work in that direction. Alternatively, you can simply use the Right joystick to use the items without needing to press A.

You can only use the current weapon that you are holding but you can swap between them by holding down the Y button and choosing what you want from the sub menu. A handy trick which I didn’t discover until later on in the game is that you can actually swap between items by using the L and R buttons. This is a much quicker method that will definitely help you get off to a better start than I did.

Turnip Boy Commits Tax Evasion is not a very long game. It is only about 3-5 hours long. For those just looking to blast through it, it will not take very long but for those who find all the documents in the game, they will be treated to little something extra for their trouble. There is even a trophy to find somewhere but we won’t spoil where it is, not in this EXPlay at least.

I will put my hands up and admit that Turnip Boy Commits Tax Evasion was never a game that was on my radar. I’m all for parody games and those looking make fun out of something but I never really understood the Yoshi Tax Meme. So when this game was essentially named over a meme I didn’t get, it was never going to score brownie points with me. After playing it though, I actually found it to be a very fun and enjoyable game that was quite difficult to put down. Before I knew it, I was rolling the credits and wanting more. Its quaint charm and familiar gameplay had won me over and now I am wanting some DLC or another instalment!