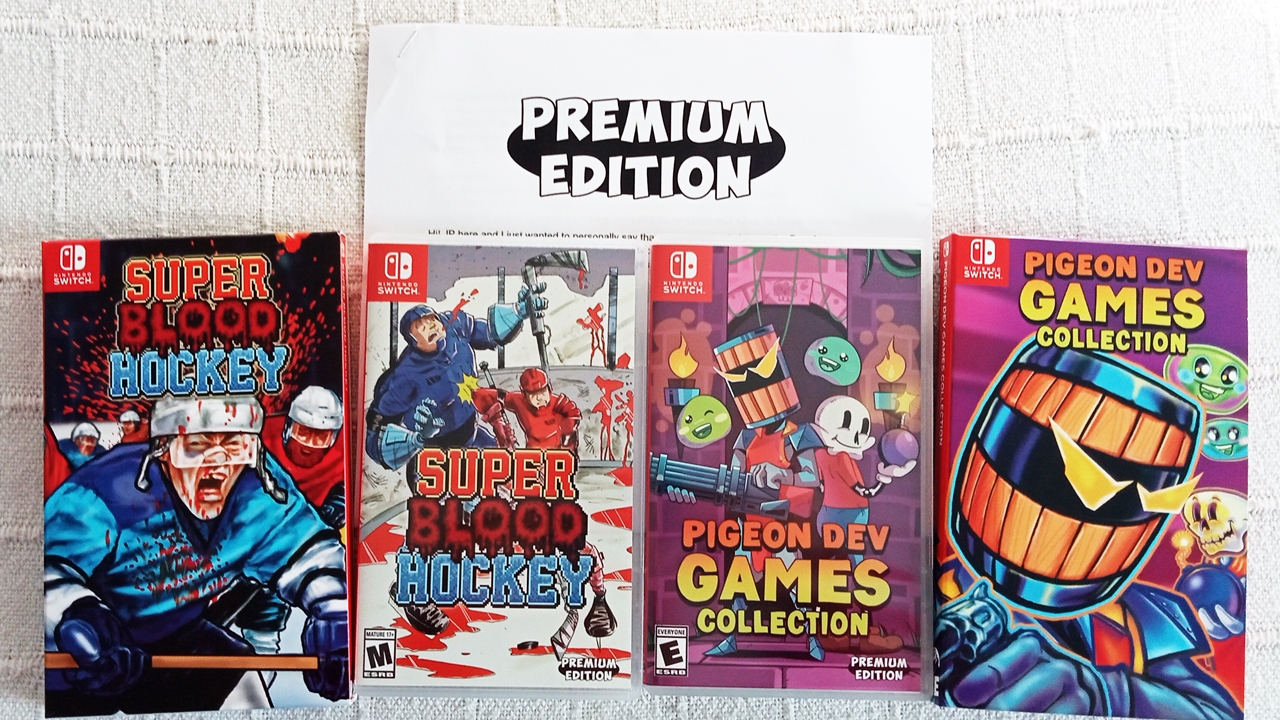 Premium Edition Games is a relatively new publishing label that is dedicated to helping video game Developers publish their games in physical format for the Nintendo Switch. Run by JP aka @JPSWITCHMANIA and a dedicated team, Premium Edition Games have two games already published with their label and a third game on the way. The two games are Super Blood Hockey by Loren Lemke and Pigeon Dev Games Collection by PigeonDev and Sometimes You.

Premium Edition Games have graciously sent us samples of both of their currently published games so it is only right that we take the time to talk about the company and its games as our way of saying thank you. As part of this feature, we have embedded gameplay videos of both games as well as an unboxing video so you can get a look at what you can get for purchasing the game physically from Premium Edition Games.

As you can see in our unboxing video, both games come with two kinds of cardboard sleeves. There is an outer cover and then there is an NES-inspired cartridge sleeve. Inside the cases, there is the physical Nintendo Switch cartridge for the game, a 20-page instruction manual, interior cover art, and a card with a Premium Edition Games Challenge printed on it. Successfully complete the challenge and follow the instructions on the card and Premium Edition Games will send you a special patch for free! The company is not just dedicated to video game preservation and publishing indie games, they also reward players for playing the games as well!

Customize your line up and take to the ice, using fast-paced skills and bone-crunching brutality to dominate. Prove your hockey prowess in a deadly global tournament or against friends in 4-player local multiplayer. Build and manage your own squad in Franchise Mode – with the right diet and performing-enhancing drugs, your team can be season champions!

Both Super Blood Hockey and Pigeon Dev Games Collection can be purchased from $39.95 each (postage not included) via premiumeditiongames.com for the US and Videogamesplus.ca for International purchases. As well as the standard ‘Premium Editions’, there are also collector’s editions that come with a whole array of goodies, including a really cool Pigeon Dev Games Collection Steelbook (Subject to availability).

The next game that they will be publishing physically is the acclaimed A Robot Named Fight. Be sure to follow Premium Edition Games on Twitter to stay up to date with the latest news and releases from the company. This is just the start of a new wave of video game appreciation and preservation like what Super Rare Games and Limited Run Games have been doing. While digital games may seem like the natural way forward, there are still plenty of us that enjoy owning physical games on cartridges or disks.

We look forward to seeing Premium Edition Games continue to grow and bring even more indie gems out of the digital realm and into the physical one.

Thank you for reading everyone and until next time, Keep On Gaming!