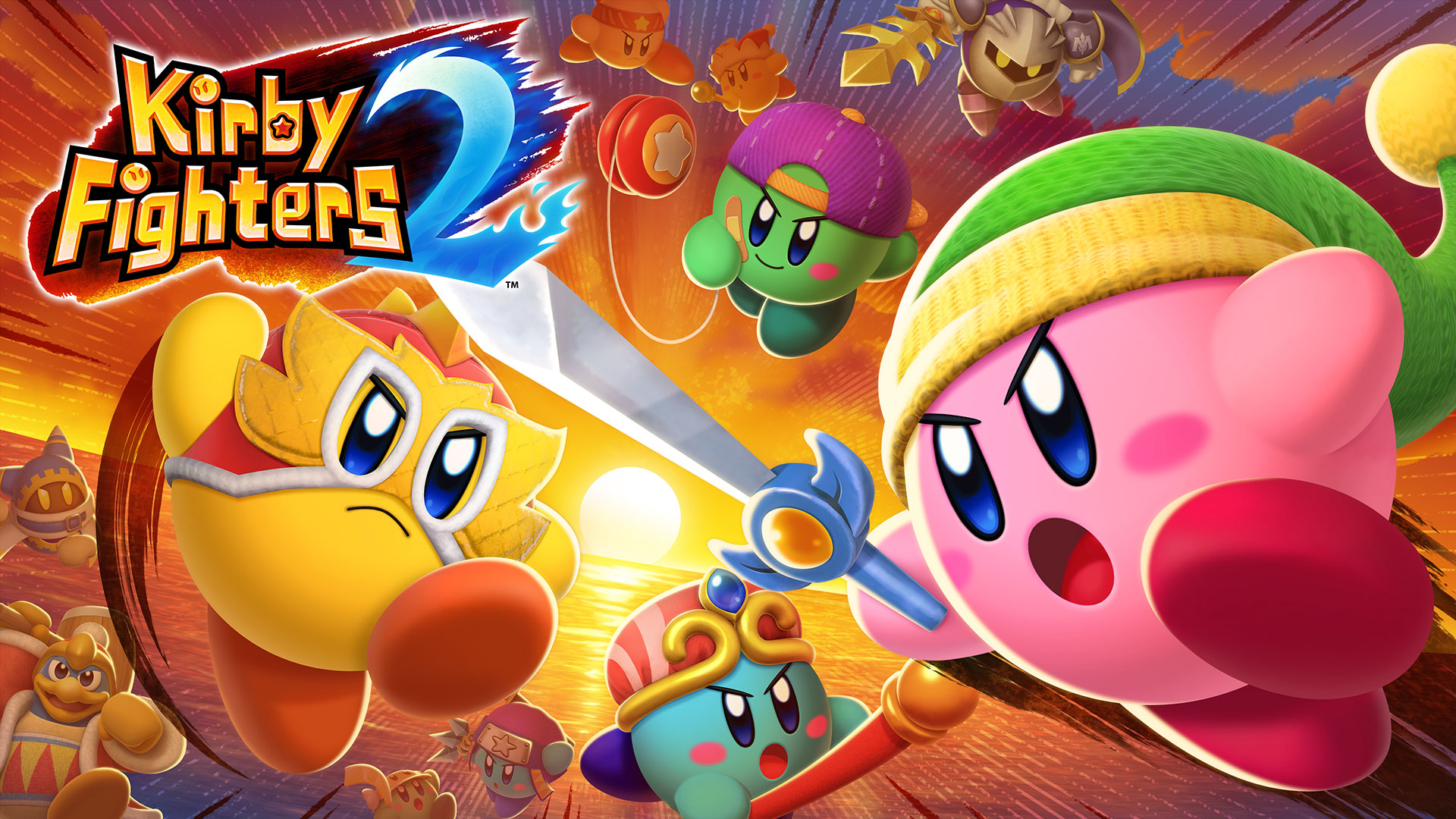 The Kirby series has been going for quite a while. The first game titled Kirby’s Dream Land, released in Japan in 1992 on the original Gameboy. The series has had more than 30 entries over the last 18 years that have released on Nintendo’s home and handheld consoles.

In 2014, Kirby Fighters Deluxe was released on the Nintendo 3DS. It was an enhanced standalone version of the “Kirby Fighters” mini-game that featured in Kirby: Triple Deluxe. The game allowed players to choose a Kirby with a specific copy ability and battle it out against other players to be the last Kirby standing.

Fast forward to September 23rd, 2020 and Kirby Fighters 2 was shadow dropped onto the Nintendo Switch. It may have been a complete surprise if it wasn’t for the fact that that game was previously leaked on the Play Nintendo Website (Whoops!). The sequel features more copy abilities than the first game plus an all-new Wrestler ability and Buddies in the form of Bandana Waddle Dee, Gooey, Magalor, Meta Knight, and King Dedede.

That is pretty much the story. It doesn’t really get more in-depth than that but Kirby games never have been very story-heavy, especially the spin-off games. I guess you could say that the story is also about the bonds of friendship and how you can overcome any obstacle when together.

Kirby Fighters 2 is a fighting game that has two teams of two square off against each other. You can choose any fighter that you have currently unlocked, be it a Kirby and a specific Copy Ability or a Buddy. You and your buddy must work together combining attacks to defeat the opposing team.

There is only one attack button but you can perform combo attacks with different directional inputs. You can also charge attacks by holding down the B button (or the Down Arrow button if playing with a single Joy-Con). You can also do different attacks in midair or whilst dashing depending on the copy ability or buddy character you are using. You can also grab and throw your opponents and also block and dodge incoming attacks.

Even if you die in Kirby Fighters 2, it doesn’t mean you are defeated. You will return as a ghost over time and can even be revived if you hit your opponent whilst in ghost form. However, your buddy must still be alive for you to return as a ghost and revive yourself. If you both die, it is game over and the opposing team will win.

Kirby Fighters 2 has three local game modes. This includes Story Mode, Single-Handed Mode, and Multiplayer, which is further broken down into 3 sub-modes. In Story Mode, you and a buddy (either another human player or CPU) must fight through multiple stages until you can confront the main bosses. There are also mini-bosses on subsequent floors that include the likes of Twin Woods, Duo Edge, and Shadow Kirby.

Upon beating a floor, you will be given a choice of a charm or sticker to select in the Item Room that will power you up. These can increase stats like health, attack, and charge. Some charms and stickers will also increase the damage you do against particular buddy characters, or minimize the damage you take against certain items like Gordos, Bombs, or Mikes.

You will also earn fighter points after each battle that will increase your Fighters Rank. When you level up, you can unlock stages, music, better charms and stickers, other characters, and copy abilities as well as Rare Hats to customize your fighter. It is important to add that Rare Hats are restricted to each particular Kirby as they are alternate skins designed around the Copy Ability.

Single-Handed Mode is a single player challenge mode that has a single player fight through 9 stages and must get the best time possible. Some stages have only a single enemy to fight, other stages can have up to three. If you die on a stage, you can retry but your time will continue to count upwards. There are three difficulties to choose from and a fourth “Extra Hard” Difficulty to be unlocked. Upon a successful clear, the character that beat the mode will have a ribbon and their high score listed so you can see check who has beaten the mode on which difficulty.

The Multiplayer Modes consist of Battle Mode (local multiplayer) on a single console, Local Play Mode (Local Wireless) and Online. In Battle Mode, you can choose to play in teams or free-for-all and select the stage you wish to play on. The same can be done in Local Play Mode and Online Mode if playing with friends. If you play a random battle in Online Mode, the players and stages are selected randomly. You can still choose the character you wish to play as though.

Some extra features that can be overlooked are displayed with three little icons on the main screen. The Notebook shows the Fighters Rank levels that you have achieved and the rewards you have earned. You can also see what the next five rewards are from your current rank. The Dumbell icon is the Training mode that allows you to play around and learn the moves and combo of each character. The last icon is of a cog and is where you can turn the rumble on and off, view the credits, and casts a spotlight to previous Kirby Games.

The Music in Kirby Fighters 2 is very much the same soundtrack from any other Kirby Game. There are a lot of familiar songs that have featured in other games so I doubt any new music was added just for this game. The sound effects also sound like the are reused sound files from other games, I’m not complaining but I wouldn’t want anyone to think that they would be listening to all-new sounds when that is definitely not the case.

When it comes to expanding the music range, songs are unlocked by increasing your Fighters Rank. Unfortunately, they can’t be selected anywhere, not even when choosing a stage to play on. It does seem a bit odd if I am being honest. At the very least, players should be able to select a song they wish to listen to on a stage. It is possible in Super Smash Bros. Ultimate (within reason of course) so why could it be implemented in this game too?

Kirby Fighters 2 does look good on Nintendo Switch, then again, so does Kirby Star Allies and Super Kirby Clash. It seems that much like the audio, the visual assets and models have been reused as well. The stages may be new or revamped from older designs from previous Kirby games. The actual characters themselves though have most likely been reused, not that this is actually an issue. The game looks great and if it isn’t broke, don’t fix it.

I wish the same could be said for the performance though. Don’t get me wrong, the Local play and offline game modes perform like an absolute dream. The online multiplayer mode is what suffers immensely. On one hand, there is not that big enough Multiplayer community for Kirby Fighters 2 as it is a new release that has had no prior promotion. A number of times whilst waiting to play with random players, the game has either timed out as there are not enough players available or a communication error occurs

On the other hand, if lucky enough to play an online match, you can be plagued with some serious lag. It gets so bad that the game becomes unplayable and worse of all, there is no pause or exit to the main menu so you are essentially stuck until a team somehow wins, the timer runs out or a communication error occurs.

As much as I enjoy playing Kirby games, to me, Kirby Fighters 2 is an unnecessary spin-off. I felt that it would have been better deserved to serve as DLC for the already existing Kirby Star Allies, or an extension to Super Kirby Clash. While choosing which Copy Ability may be fun to use and wail on your friends, you would really have to enjoy playing Kirby games to get the most out of this one.

I suppose it could be seen as a more cost-effective alternative to Super Smash Bros. Ultimate where pretty much all the characters are Kirby but with different abilities. Kirby Star Allies has a similar character roster to Kirby Fighters 2. However, you work together with other players as oppose to fighting against them.

The Story Mode is only part of the game but is most likely the “go-to” mode where you can increase your Fighters Rank. You can increase it in the other modes as well and earn more points per match. That said, you can also choose to collect trophies in Story Mode that reward you with more points to be added to your Fighters Rank when you finish. The Fighters Rank serves to limit how quickly you can earn new stages, copy abilities, songs, and Rare Hats so it is really up to you on how much time and effort you want to put into the game and if it is worth it.

Kirby Fighters 2 is a decent enough game that can still provide a lot of fun on a smaller scale. It is priced fairly for the content included but I feel it lacks any real sustenance that will keep players coming back to it over time.

*The game was purchased personally for the purposes of this review