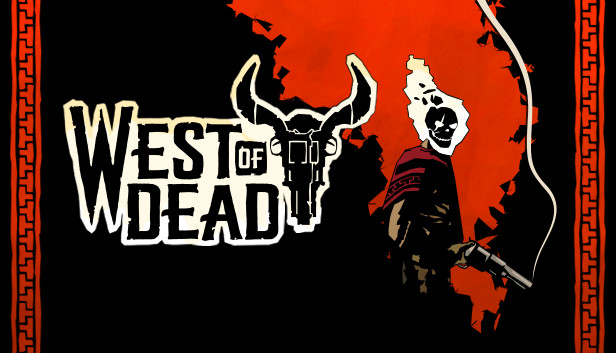 West of Dead was developed by Upstream Arcade, an independent studio based out of Goldaming, UK. They started their development as they worked on such games as the Fable Franchise!  West of Dead  was also published by Raw Fury who also have a few  games under their belt that will release for the Switch soon!

West of Dead features the voice acting of well-known action star, Ron Perlman who plays William Mason, who has descended into a procedurally generated, wild west world of Purgatory, Wyoming in 1886. The story begins with his death, and he takes on a countenance akin to “Ghost Rider” (Flaming skull for a head) and must travel throughout this unknown world that is full of shortcuts, weapons, and bad guys.

After you die the first time, (trust me…you will die a lot…It is part of the game…) You wake up in a rundown saloon and share some words with the bartender. Then your journey begins. Every time you die, you end up back at the bar to try again. It is quite a unique twist on the idea of death and purgatory.

Along the way you find various weapons, meet various people such as the Witch who sells you items for Sin, the currency in the game that you collect each time you defeat all the bad guys in a part of the procedurally generated levels. You replenish your health at giant barrels full of “alcohol” or whatever they give you in the afterlife.

The storytelling and writing is brilliant. Ron Perlman’s dry, depressed voice adds a tinge of darkness to this already grim world you must traverse. I could listen to him describe the world you explore for the entire game.

West of Dead is a procedurally generated, twin stick rougelike, cover based arcade style shooter. You will die a lot. And each time you die, you can use what you experienced to help you figure out the best pathways throughout each level. With it being a procedurally generated style rougelike, this game can be quite challenging, which honestly adds to the fun and excitement of this game.

You have two weapon options on the triggers, and you must use the thumb sticks to aim at the bad guys trying to kill you, even though you’re already dead. Your best bet is to find cover and aim carefully before you shoot, as you may have unlimited ammo, but it takes time to reload when you empty a clip. The cover you choose will not last forever, especially if a baddie decides to throw dynamite your way.

Every time you destroy a bad guy, a satisfying bell rings and the music will change when you have defeated the last enemy. Throughout each level and encounter with enemies, there are sometimes lamps you can use to stun all the bad guys in the room to give you an upper hand.

This game is full of a variety of weapons that you will discover, but you can only carry two at a time to begin with. This will help you strategize and find the weapons that suit you the best. You can also upgrade yourself and your weapons at various points throughout the game. There are also throwables you can use to increase your damage as you hide behind cover.

Not being a proponent or a connoisseur of rougelikes, I was intrigued at the amount of exploration this game commands. With it being procedurally generated, each time you die is like starting a new game, which at times can be frustrating, but that is the charm of games like this.

The journey is the destination and how you far you go is directly proportional to how good you are as a twin stick shooter, of which I have learned that I am not good at rougelike twin stick shooters….I treat each death as a way to figure out how to get better with each run.

Just like learning music, or a new skill, rougelikes like West of Dead take time and patience and practice…and more patience…I thought teaching middle school band helped build patience before I played West of Dead. This is of course not to say it’s a bad rougelike, the challenge is what makes this game enticing!

West of Dead being a procedurally generated shooter is full of a variety of weapons and playthough opportunities. It is not linear at all, however, with each death comes the personal experience of trying to get further than the last time. It is a single player rougelike that is full of weapons and strategy.

The map helps you keep track through each playthrough as you find portals that help mark where you’ve been. There are shops to buy things with Sin and areas that replenish your health. Using light to stun your enemies and lock on them is a great feature, though not every encounter will allow that. You have to be accurate in the dark as well as the light, or it could prove fatal.

The audio in this game is among my favorites that I have reviewed. Ron Perlman’s voice narrating you through each playthrough really adds to the atmosphere of the game, as well as the fact that a major actor is a part of what is basically an “indie” game. I believe that is a pretty big deal for this title!

The shooting sounds are crisp and clear, and the music is well orchestrated, pulling you into the 1880’s wild west purgatory. The western style guitars and the satisfying DING when you finish the final enemy is really well done. If you stand around for too long, Ron will chime in the push you into continuing. I found many of the sounds and background music very satisfying and immersive.

The graphics for West of Dead are a neat take on the cell shaded graphics style. Using light and darkness, this game almost feels like you are playing a graphic novel. If Ghost Rider were an 1880’s undead shooter, that would be West of Dead.

The frame rates are quite smooth and throughout my entire playthrough, I experienced hardly any hiccups. Handheld mode was just as smooth as well. This game is perfectly at home on the Nintendo Switch! Even when there are a lot of enemies and action going on in docked mode, I experienced no dips in frame rates or bugs. The graphics are honestly my favorite feature of this title.

Not being a huge fan of rougelikes, personally, I found this game to be more enjoyable than I initially thought. The more I played it, the more I wanted to get better and delve deeper into Purgatory, Wyoming. I felt myself getting better at the “twin stick” shooter style of the primary gameplay and I also felt myself getting immersed more and more into William Mason’s story.

This game is definitely a niche title. If you are not a fan of the procedurally generated rougelike, do not play this game. You may end up breaking your controller. If you are curious about the genre itself, this game could help you ease yourself into that style of gameplay. I have not played many games like this and now I am curious as to how other games in this genre perform.

It is challenging, but the challenge is not without rewards. If you feel you are up to the task on a game like this, then enjoy the wild west afterlife!

West of Dead is challenging and it opened my eyes to how fun a procedurally generated rougelike game can be. I hope that if you’re into this style, you enjoy playing it!