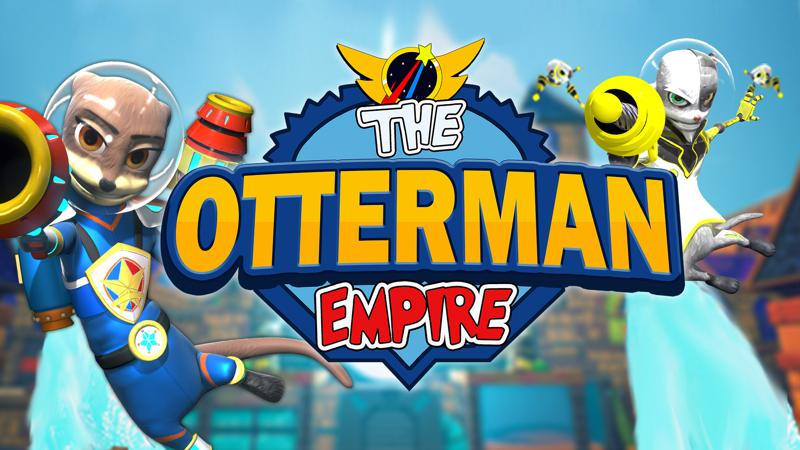 The Otterman Empire is Tri Heart Interactive’s first major title. It released on July 2, 2020, on Steam, Xbox One, and Nintendo Switch. Tri Heart Interactive is a community-driven company. They work closely with their players and take into consideration their community’s opinions on the game.

In The Otterman Empire, you can team up with a friend in 1-4 player couch co-op to complete objectives and fight the evil Tiko! Choose from a small array of characters with customizable options for your character and jetpacks! The basis of this game is an arcade-style, chaotic two minute, objective-driven frenzy! Each world contains its own hazards and tasks as well as power-ups for score multipliers! The evil Tiko is trying hard to take over the world and it is up to you and your friends to take him down!

In my opinion, I wish there was a little more depth to the story. I understand that at its core, this is a party, arcade-style game, and thus a deep story is not necessary. As a fan of a good story in any game, even arcade party shooting games, I think this title could benefit from more depth and character development. This game is akin to Splatoon 2’s campaign. Objective-driven, three-star progress tracking, etc., and I felt that campaign had a little more depth and character development. With this being an independent title, it is achieving what they set out to do: Create a fun, fast-paced, couch co-op, party shooter!

As mentioned before, at its core, The Otterman Empire is a fast-paced, action arcade party shooter. The look and feel remind me of Fortnite meets Splatoon, Overwatch, and any classic, old school 3D Platformer. Each round is two minutes long and there is a multitude of game types to choose from. The campaign itself works you through all eight worlds and all the game modes available. I felt myself getting the hang of it as I progressed through the campaign.

Each level will explain your objective with an unskippable cutscene. Tiko is up to some kind of no good and you must achieve the highest score you can, three stars is the main goal. The more stars you unlock, the more things and characters you unlock. I wish the directions were a little more direct or written out. Even some of the hazards I had to figure out how to avoid the hard way too many times. The clock does not start until the game starts so there’s plenty of time to read directions on certain game modes.

You have the following characters to choose from: Astrid, Geo, Noah, Bubbles, Lyra, Croc, and Turtle. Each character has their own unique special as well as playstyle. Astrid is more balanced and quicker and his special is a drone that attacks the bad guys for you. Geo is a slow-moving tank who packs a punch, literally. His special is a rage mode where he swipes his claws and destroys everything in his path.

Noah is a Sniper who takes some getting used to. His shots are one shot one kill but you must be accurate, I would up the sensitivity if you play as him. His special launches a bunch of killer fish from the sky. Lyra is a healer type and her special is a health boost. Croc is another tank who throws fists at everyone. Bubbles is my personal favorite. He is quick and powerful and his special is a running explosion.

Just like Splatoon, when you run out of ammo in your squirt gun, you must dive into the river to reload. While unique, this can get tedious. It keeps everyone on even ground but when you’re focusing on an objective, it gets annoying to have to run back to the river to reload. You’re also getting shot at while you’re completing objectives so you need to keep your eye on your health bar as well.

Being a smaller Independent title, this game does not feature online multiplayer. The creators were fans of couch co-op when they were growing up and wanted to create a game that included that. Throughout the game, there are plenty of cosmetic unlockables as well as the different characters to unlock as well.

In Versus Mode, you can choose from the eight worlds, Ottopolis, Tiko Gardens, Ice Quarry, Medi Centre, Ancient Ota, Battle Arena, Volcanico, and Turtle Bay. You can set up and choose from the eight different objectives such as Squiditch, Target Range, Detonator, Battery banker, King of the Hill, Repair Robot, Bombardment, and Hoop Dive.

Squiditch is exactly what it sounds like. Squids..I mean…otters playing a form of quidditch. In this mode, you must grab a bomb and detonate it in one of the floating hoops, like throwing a ball through a hoop in quidditch. Target Range is straight forward as well. You must shoot the targets and make the highest score possible. Detonator involves finding a bomb and moving continuously. If you stop for too long, it will blow up on you!

Battery Banker involves finding different batteries and taking them to their corresponding location. The more you get, the better the score multiplier! King of the hill is the classic King of the Hill. Stay in the position to raise the score. The challenge lies in reloading. You have to leave your post in order to reload and hurry back before it respawns elsewhere!

Repair robot is just like King of the Hill, but with a robot that repairs the longer you stay there. In Bombardment, you must take down Tiko’s ship and shoot and destroy his missiles he drops as well. Hoop Dive is my favorite mode. You must float with your jetpack and fly thought the quidditch hoop with your dodge move to score a point! This seemingly small independent game has plenty of variety to keep the party going!

This is where I will probably be the most critical. As a musician and overall audiophile, I wish this game had more to offer as far as music and voices. The characters have no dialogue, which is not a big deal honestly, but it just leaves a little to be desired as far as caring about the story.

The music is generic background music and while I understand this is an entirely independent title from a small developer, I hope they can boost their sound quality and music in the future. I’m sure England has plenty of composers and musicians they can find to take this game’s audio to the next level! The gameplay sounds and everything else is quite good. It’s mainly the music that I am critical of.

At first, I did not realize this was a small indie game and was not a fan of the graphics. But after digging some more and playing this game, the graphics are not bad! Especially since launch, I feel they’ve gotten even smoother. The graphics remind me of old school N64 or Gamecube platformers and this title performs quite well in both docked and handheld/tabletop mode.

Split-screen doesn’t have any tears or issues either. I’m sure figuring that out was an undertaking (I am not a game developer by any means…). The art style is great for kids, especially with Fortnite being all the craze. This game would be great for any kids party or to just get them off Fortnite for a little bit

Like most games that don’t have the next-gen graphics of today, this game runs better in handheld mode, at a smooth 30fps. I will say, it took some getting used to using the B button for most of the activations. This is a function that hearkens back to SNES days when B was the command button. I found myself switching or backing out when I didn’t mean to quite a lot.

Overall, I enjoyed this game. With it being the company’s first title and an indie developer, I applaud their efforts. I also appreciate how in tune with their audience they are. Just look at their website and you can even give them your own feedback on the game and I’m sure they’ll respond! Any developer that is willing to respond and listen to their audience is a winner to me.

While it has a couple drawbacks, this game achieves totally what the developers set out to accomplish: Create a fun, fast-paced, couch co-op multiplayer experience that honestly this industry needs more of! The story is cute and the variety of characters and games makes this experience less exhausting than one would think.

At just $25, I believe it’s worth the money, especially since you’re supporting a small indie developer. This game is great for kids or millennials who yearn for the old school 4 player split screen shooters of the 90’s. Especially if you like Otters…