[Feature] An Introduction to the Mirage Masters of Fire Emblem Heroes 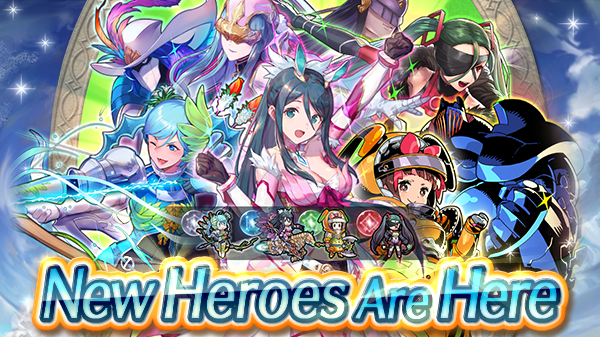 While the likes of Rowan and his twin sister Lianna, (both from Fire Emblem Warriors,) have been denied the chance to be summonable as heroes in the hit mobile app, Fire Emblem Heroes, this week, 5 new heroes have been added.

Instead of debuting in a Fire Emblem game, they all hail from TOKYO MIRAGE SESSIONS #FE Encore, which first debuted on the Nintendo Wii U, saw a Nintendo Switch worldwide release on January 17, 2020.

For anyone who would like to learn about these 5 new heroes, a collection of the officially released information on each one, can be seen here:

Itsuki was just an ordinary high school student. But one day, his life changed completely when his friend Tsubasa was pulled into a parallel world—an Idolasphere—and it was up to him to rescue her!

In the Idolasphere, Itsuki encountered strange entities known as Mirages, and he acquired the powers of a Mirage Master, which allowed him to partner with them in battle.

The Mirage who came from another world to partner with Itsuki was none other than Chrom! By fighting alongside Itsuki, he gradually regained his memory and the powers he’d lost.

The source of a Mirage Master’s strength is their creativity, and so Itsuki joined the Fortuna Entertainment talent agency to hone his artistic talents and fight alongside his friends in their battle against the intruders from another world!

Energetic high schooler and idol, partnered to Caeda. She gives any job her all. Friends with Itsuki since childhood.

A prince of Ylisse and descendant of the Hero-King. Leads the Shepherds. As a Mirage, he supports Itsuki and the two form a strong bond.

Tsubasa Oribe is a cheerful and outgoing high school student. She can be a little clumsy and goofy at times, but she’s a hard worker and will never give up on something she’s made up her mind about!

Her older sister is the singer Ayaha. Apparently, she went missing five years ago in a strange incident where she and a crowd of about a thousand audience members vanished into thin air…

Trying to find clues about Ayaha’s disappearance, Tsubasa took part in an audition for the entertainment industry, but it turned out to be a trap! She was dragged into an Idolasphere—a world similar yet different to her own—and there, she discovered she had the powers of a Mirage Master.

The Mirage from another world who partnered with Tsubasa was none other than Caeda. After securing her debut as a singer, Tsubasa began to let her inner creative power flourish and spread her wings as an artist!

A young man who battles evil Mirages at Chrom’s side. A kindly leader to his comrades. Friends with Tsubasa since they were young.

A singer with a slick image and many fans. Throws herself into battle alongside Tharja. Tsubasa is a huge fan of hers.

Princess of Talys who’s as talented as she is charming. Marth’s betrothed. She gently watches over Tsubasa as she grows into an expressive artist.

Mamori is an elementary school girl and a singer from the Fortuna Entertainment talent agency. She’s polite, honest, and adored by everyone around her. I’m told that she’s also the star of the popular TV show Microwavin’ with Mamorin!

Mamori had always been a stranger to conflict, but when her trainer Barry was possessed by a Mirage, she plucked up all her courage to become a Mirage Master and save him!

As a Mirage Master, she’s partnered with Draug, the veritable wall of steel himself! Equipped with an axe that’s even bigger than herself, she protects her friends from the threat of dangerous Mirages.

As Barry says, Mamori’s got pure innocence, a heartwarming smile, and…a cuteness that just makes you want to protect her too, apparently! I wonder if there’s room in the fan club for me?

Originally a musician on the international stage, Barry was also once a Mirage Master, but now he works as a trainer for Fortuna Entertainment. He dotes on Mamori and has formed an unofficial fan club.

An armored knight of Altea who served as Marth’s shield. Very sincere. He becomes Mamori’s Mirage, helping her out with his rock-solid defenses and skills with an axe.

Kiria Kurono is a hugely popular singer who performs under the stage name KIRIA. She has a cool yet mysterious style that drives her fans wild, and she’s a big hit with teenagers especially!

Little do they know, she’s actually a Mirage Master who has a secret life fighting rogue Mirages—strange entities from other worlds! In fact, she’s the leading member of the Fortuna Entertainment talent agency, the true purpose of which is to protect mankind from dangerous Mirages.

Kiria is assisted by the dark mage Tharja, who manifested as a Mirage and supports Kiria with ice-based magic!

Kiria is strict and uncompromising toward herself and those around her. However, she has a little secret that I can share with you: cute things make her go completely weak in the knees!

Energetic high schooler and idol, partnered to Caeda. She gives any job her all. A huge fan of Kiria’s music.

A mage from Plegia with a dark side and a possessive streak, especially with Robin. Tharja is always watching over her partner Kiria…in her usual unsettling manner.

Eleonora Yumizuru, or Ellie for short, is a young, half-Japanese actor from the Fortuna Entertainment talent agency. I hear that she’s got big Hollywood dreams!

Ellie is younger than Itsuki and Tsubasa, but she’s been at Fortuna longer than they have. While she can be aloof and competitive, I hear that she’s really been looking out for the two newcomers!

As a Mirage Master, Ellie is supported by Virion, the archest of archers. He lends her his power through breathtakingly noble and elegant feats of archery!

She might come across a little prickly at times, but she really does care about others. I’m told that she’ll do anything to save her friends, even if it means punching someone out! It sounds like we can expect great things from her in Askr!

A young man who battles evil Mirages at Chrom’s side. A kindly leader to his comrades.

An energetic high schooler and idol, partnered to Caeda. She gives any job her all.

Rightful ruler of Rosanne in Valm who has a tendency for wit and puffery. As a Mirage, he assists Eleonora, but his “noble” attitudes often clash with her “Hollywood” attitude.

Good luck summoning them all Summoner, plenty of Orbs will be required. Although unlike the other four, Itsuki: Finding a Path, can be acquired via meeting certain requirements in the upcoming Tempest Trials+: Mirage Vortex.

You will also get the chance to battle them all thanks to new A Star is Born Paralogue maps and the limited time one, Wings Carry Me Tap Battle event.