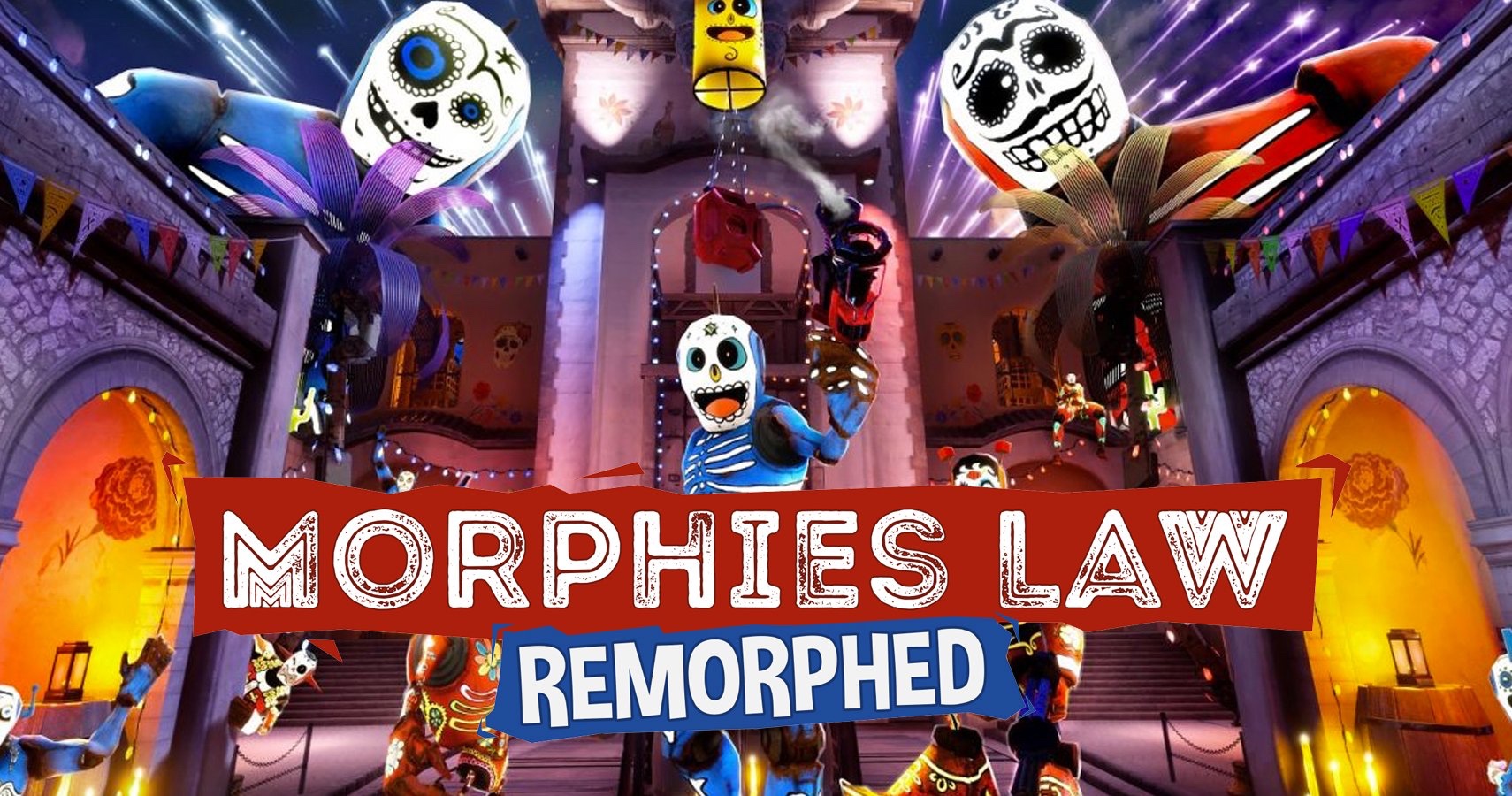 Number of players: Up to 8 (Online)

In 2019, the video game market would not be complete without the Shooter genre. Every fall, the latest Call of Duty and Battlefield are plastered all over the internet but are scorned for improving little in each release. Other series, such as Team Fortress, Splatoon, and Overwatch, avoid these constant releases, opting to allow the community to keep the brand relevant. All of these series have one thing in common: the budget. These are Triple-A releases; there are hundreds of thousands, if not millions, of dollars invested into each title. In this environment, an indie shooter sounds oxymoronic. Yet Morphies Law: Remorphed exists.

Morphies Law caught my interest when it was announced at Pax West in 2017. A shooting game in which you grow and shrink based on shooting other players? Intriguing. However, when the first players gravitated towards the game in August 2018, they found a slew of issues, dooming the game to obscurity. However, after a year of updates, the game was rebranded as Morphies Law: Remorphed. Was this revival fruitful, or is Morphies Law: Remorphed destined to be pulled past the event horizon of failure once more?

Morphies Law: Remorphed is a team-based third-person shooter. Players control Morphies: robots that change size as they shoot or are shot. When one Morphie shoots another, mass from the body part that is hit is stolen and added to the attacker. Each body part grows independently, leading to countless bizarre scenarios. The size of each body part affects some aspect of a Morphies’s performance. These include weapon accuracy, running speed, and reload times. In addition, a larger body naturally makes one more noticeable, and by extension, easier to hit.

Morphies can walk, jump, buttrocket, and use weapons. Walking and jumping are self-explanatory. The Buttrocket is a jetpack allowing for a brief flight. Once the fuel is depleted, the Morphie drops to the ground, where fuel is quickly replenished. Gaining more mass in the abdomen area allows for longer flight duration and greater vertical distance. Weapons can be aimed with gyro controls in the same “hybrid” set up found in Splatoon 2.

Weapon sets in Morphies Law are built from individual parts instead of being predesigned. Weapons come in three parts: the Base, the “Beef it Up”, and the Plugin. The Base is the primary weapon. All the expected categories appear, such as the Ratata rifle, the Kaboom shotgun, and the Hip Shot hand pistol. The chaotic nature of Morphies Law is manifested in the “Beef it Up” selection. These are secondary weapons, which generally have longer reload times but can save a player in a pinch. Examples include the Hit Me Please shield, the Fat Falcon rocket, and the Slippery Splat oil spill.

Though the Base and “Beef it Up” parts of a weapon are not overly impacted by body mass, the Plugin is. Plugins are cooldown based abilities that are strengthened immensely when the appropriate body part is enlarged. These abilities typically do not deal direct damage, instead impacting the battlefield or positioning of the players in some way. My personal favorite was the Sticky Hand, a grappling hook that stuns any enemy it passes through and pulls the player to walls. Its range is dependent on the size of the player’s hands.

Weapon kits can be created outside of battle and assigned to a weapon slot. These slots can be selected from while in the player’s spawn zone, but can not be modified during combat. Individual weapon parts and slots are unlocked as the player levels up. The player gains experience from battles and quests. All the parts are unlocked by a relatively low level (17), which I appreciated, as it allowed for full reign over gameplay customization as early as possible.

Morphies Law features 5 modes: Morph Match, Head Hunt, Mass Heist, The Masster, and Los Angelitos. As in Splatoon, each mode advantage of the game’s central gimmick. Matches can be played with AI offline, with random players online (AI will fill in the empty slots), locally with friends, in a private lobby with friends, or on a team of players against AI. I like that the game has numerous ways to play offline, as it will allow the game to remain playable once the player base declines.

Morph Match is the “vanilla” mode. In this mode, teams of 3 Morphies battle over mass. The team with the most collective mass at the end wins. There isn’t much to say about Morph Match, as it truly is just the core gameplay of Morphies Law.

Head Hunt is Morphies Law‘s “Capture the Flag”. In this mode, the teams must fight to bring their Avatar’s lost head back to base. The size of each Morphie impacts how well they can carry the head.

In Mass Heist, players steal mass from the other team’s Avatar by standing on special panels and firing. This mode feels a bit more involved than Head Hunt, as the abundance of panels forces players to remain aware at all times.

The Masster is similar to Morph Match but instead focuses on having the player with the highest mass. Since the “Masster” has a beacon placed on them for all others to see, it significantly changes the flow of the game. It forces strategic defensive play, which does not occur as often in other modes.

Los Angelitos is arguably the mode with the fastest pace. Periodically, the player with the lowest mass is turned into an Angelito. Angelitos can aid teammates, but can’t steal mass from the other team. The team with the last regular player wins. Since there is a countdown before the next transformation and an indicator of who is in danger, this mode encourages quick play throughout. In other modes, the timer doesn’t change the flow of combat until the last minute, but in Los Angelitos, there is a noticeable difference in strategy as the battle rages on.

What team-based shooter would be complete without customization? Morphies Law includes the aforementioned weapons customization, but also offers a slew of customization options. These include cosmetics for the body and face, intro animations, emotes, and musical instruments for the lobby. The sheer amount of choices is incredible.

These options are unlocked by opening piñatas unlocked through gameplay or buying the items directly from the store. Piñatas are obtained from level ups or the completion of quests. They give three random items. Repeats can occur, though refunds are issued in exchange.

There isn’t much music present in Morphies Law, though that is ok. The main theme is not bad, and the many modulations of it present during battle don’t sound poor (though they do become repetitive). It’s the sort of soundtrack that you forgo in favor of playing other music in the background. However, I do not think that the lack of great music is a deathblow to the game as a whole since the chaotic battles are not dependent on a majestic orchestral score.

Morphies Law is unashamedly strange in its presentation. The Morphies all look like skeletons from Day of the Dead through the details on their bodies. The maps are not too detailed but do manage to convey the “dusty” feel one would associate with the desert. I like the current visuals, as it helps homogenize the quirky identity of Morphies Law.

Fortunately, I encountered few technical issues. I do not recall any crashes, and slowdown, if present, was not noticeable. I especially liked that a reconnection process is in place when connection errors occur during online matches. Games with punitive systems like Splatoon 2 could certainly benefit from a method to forgive unintentional disconnects.

Though Morphies Law is flawed in some regards, it is undeniably fun. The chaotic matches feel different from most shooters. While I would still recommend Splatoon 2 or Overwatch (though perhaps not the Switch port) over Morphies Law, I feel that the distinct style makes it worth playing if you are tired of the usual type of shooter.

There are currently only 9 maps present in Morphies Law, but each one makes use of the gimmicks in some way. For example, the unstable buildings of Morphie Saloon will sink if you stand on them while too large. La Buttrocketeria has Buttrocket refills scattered throughout the air, leading to many engagements impossible in other maps. Every map forces a deliberate change in movement through some sort of feature.

The weapons are in a similar situation. Though there are only a few weapons when compared to Splatoon, each one feels useful in different situations. Being able to switch weapon sets during battle makes combat a bit more dynamic.

I feel the cosmetic unlock rate was quite poorly balanced. The price of the rarer items feels ridiculous when compared to the rate at which you earn Bolts (the game’s currency). Fortunately, this is not a product of greed, as there are no microtransactions present. Because of how many subcategories of customization are available, it feels impossible to earn many items.

While making the system this way was likely intentional, I dislike it. Because of the smaller scope of Morphies Law, I doubt it will be able to keep most players playing for hundreds of hours as Splatoon or Overwatch could through frequent community events. I think that if the luck-based piñatas were removed in exchange for lower cosmetic prices, the issue would be resolved. However, this problem does not impact the actual combat, so in the grand scheme of things, it doesn’t matter (pun intended).

However, there is an issue that is relevant to the gameplay. Mode selection is essentially random between each match. Each player in the lobby gets to choose what mode they wish to play. From the votes the choice is randomly selected, similar to Mario Kart 8 online course selection. I assume this was done to consolidate the small player base instead of splitting it five ways. However, bots already fill in slots if there are not enough players, so this motivation makes no sense.

It is important to remember that Morphies Law: Remorphed is a dynamic game. When I began playing in September, Los Angelitos was not a mode. FANtastico was not a map. Some of my earlier grievances have been addressed through updates. It is impossible to predict where the game will be in a year, so my current complaints may become invalid.

It is worth mentioning that the game has been permanently discounted on Steam by 75% and has a free demo known as Fartnight on PC. In Fartnight, you can play the game for about 30 minutes before all sound effects are replaced with those of a flatulent “nature”. I have not tried it out, but if you are unsure about purchasing the game, it would be wise to start there. There is cross play between PC and Switch, after all.

Morphies Law is flawed, but was clearly made with love. Though inferior to giants such as Splatoon and Overwatch, this game is worth considering if you want to have nonsensical fun for a little while. The unbalanced economy seems balanced around microtransactions, yet none are present. For most people, it might be worth picking up Morphies Law on one of its many sales or waiting for a bit more balance.

*A download key was provided by the developer for the purpose of review.