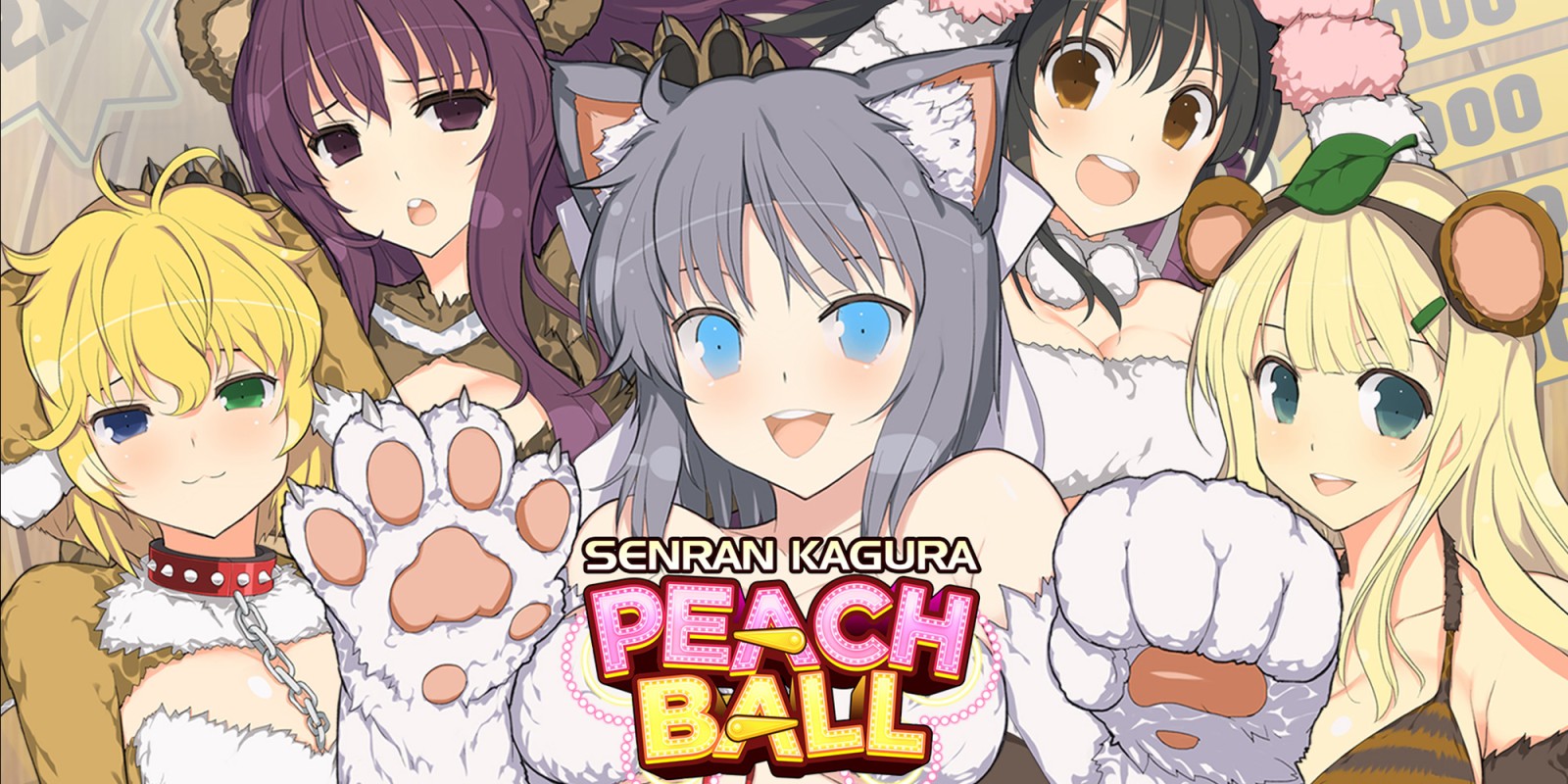 Senran Kagura is one of those games that’s so infamous that even those who’ve never played a single entry are probably aware of it. If by some miracle you’ve managed to avoid hearing anything about the franchise, it’s ostensibly a series of beat ‘em ups starring an all-female cast of ninjas, though in reality they’re thinly-veiled excuses for otaku to ogle half-naked anime girls.

Lately though, Senran Kagura has strayed from its side-scrolling roots and branched out into various spin-offs. These include Bon Appétit!, a rhythm cooking game, Peach Beach Splash, a third-person shooter with water guns, and Reflexions, a dating sim where you can give the girls massages. Peach Ball is the latest entry, and while the genre is new, the sexed-up atmosphere is exactly the same.

Five of the Senran Kagura girls are having a video game tournament at the arcade their friend Haruka works at when one of them finds a mysterious green substance in the bathroom and mistakes it for hand soap. As it turns out, it’s actually one of Haruka’s experiments, “Beastall”, which transforms whoever touches it into a human-animal hybrid. This affliction can be spread through touch, so of course all five are quickly infected.

Haruka’s quick thinking leads her to come up with an extremely convoluted solution to this problem: you must talk to the girls to “stimulate their minds and awaken their human consciousness”, then release a mist contained within a device called the Peach Ball to restore their humanity – and what better way to achieve the proper vibrational force needed to release the mist than by luring the girls on top of a pinball machine and repeatedly smacking them with the ball?

As you may have guessed, Peach Ball is indeed a pinball game, mixed with a dash of visual novel. In the game’s Story Mode, you select one of the five girls and go through five stages where you rescue all of the other protagonists from their furry fates.

The cutscene dialogue before and after each stage is sometimes funny and often cringe-y, but I have to admit that it kept even a total newcomer like me entertained. But enough about the story, let’s get to the gameplay… although playing Peach Ball for the pinball is a bit like reading Playboy for the articles.

Peach Ball has an absurd amount of mechanics, so I’ll try to keep it limited to the most relevant ones. As you play your typical game of pinball, Peach Missions will appear on the right side of the screen that ask you to hit certain targets or reach a specified score. Clearing these missions will accrue Peach Points, and once you have enough you can access a Sexy Challenge by hitting the girl with the ball.

Sexy Challenges are like little minigames that culminate in an animation of the girl getting knocked down. Once this happens, it starts an After Break on the table where you can hit the girl to get loads of points while she recovers from her ordeal. After you reach the maximum amount of Peach Points, you enter a Super Sexy Challenge where you… well… look, there’s no euphemism in the world that could disguise what goes on in these segments. You literally use the flippers to play with the girl’s breasts or butt until the ball’s mist sprays on her and she gets completely naked with only her arms to cover her shame.

Should you want to simply play the game without having to deal with those pesky cutscenes after clearing a table, Free Mode is the option for you. Instead of ending the game when you complete a Super Sexy Challenge, the table simply resets to let you keep going until you eventually run out of extra balls. You can also sometimes encounter a Secret Super Sexy Challenge, where instead of making the girl take her clothes off, you earn a new item for use in the side modes.

The game is almost Peggle-like in how generous its physics are (and I’m not just talking about the jiggle physics), ensuring that even pinball neophytes will have no trouble getting through the game. It’s not such a bad formula, but it would be better if there were more than a whopping two tables to play on. I know that Pokémon Pinball is one of the most beloved pinball games ever made despite having just two tables, but there you had the appeal of catching 151 different Pokémon.

Here there’s no collectathon aspect to enjoy, instead replaced by titillation that feels more than a little pointless. After all, why go through several minutes of work to see these characters in the buff when a quick Google search can provide endless pictures of Asuka and the gang that are far more explicit than they could ever get away with in a Nintendo-approved video game?

The actual gameplay can also be a bit too brainless at times. When you get into the mini-games or unleash multiple balls in Super Fever Time, timing and precision go out the window, and the best course of action is to merely spam the flippers until it’s over.

I like my pinball wacky, but no amount of flashing lights and colors can change the fact that you can spend minutes at a time in this game simply watching your score go up while you have little interaction.

Peach Ball’s side modes are exclusively focused on fanservice, so if you’re only interested in the gameplay then you might as well just skip to the end. For those who buy Senran Kagura games under no false pretenses, you’re in for some decent extras.

First off there’s the Dressing Room, where cosplay fanatics and perverts alike will assuredly spend most of their time. You can put the girls into all kinds of costumes by giving them different outfits, lingerie, and hairstyles. You can also give them a whole host of questionable accessories, including a censor bar, an eggplant, and a chain collar.

Perhaps my favorite item was the Dakimakura, which attaches a hilariously explicit body pillow to the girl’s body that covers them up almost entirely. Even more customization items can be acquired in the shop, including new skins for your pinball tables and the ball itself.

Next up there’s Intimacy Mode, which lets you eyeball the girls to your heart’s content whilst you literally grope them and spray them with water. In typical anime fashion, they object to everything you do to them while also letting out extremely suggestive noises and doing absolutely nothing to stop your creepy disembodied gloves from exploring every part of their bodies.

Aren’t they all badass ninjas? They should be breaking you in half! This mode is so limited that I can’t imagine most people will get anything more than a brief chuckle out of how brazen it is to include such an outrageous feature, but for those who’ve desperately wished for a game where you can sexually harass anime girls on the Switch… knock yourselves out.

Lastly there’s Diorama Mode, which lets you put the girls in all kinds of poses on the two pinball tables. Obviously, you can put them in plenty of sexually provocative positions, but there are a good amount of cute and funny poses too. You can change their facial expressions, give them additional effects like hearts or steam coming out of their ears, place objects and accessories in the scene, and even change their size if you want to see mini Yumi meet a giant Yomi. Senran Kagura fans will definitely get a lot of mileage out of taking pictures in this mode.

Lastly, there’s also a whole bunch of overpriced DLC if you absolutely must get the most out of your Peach Ball experience. Currently, there’s a $14.99 Stage BGM bundle of music from past Senran Kagura games that you can use during gameplay. July 16th will bring a second wave of DLC with new outfits, accessories, and diorama poses, and July 23rd will close things out with two more outfit packs and a “Busty Special DLC Set”, whatever that is.

I had no expectations for Peach Ball’s audio, but it’s surprisingly excellent. The Peach Land table has a great ragtime theme with a remix of the Maple Leaf Rag playing as you bop your way to victory, while the Shinobi Park table has a traditional Japanese sound to its music with hints of Sakura Sakura here and there. Combined with the upbeat tunes on the menus, it’s hard to complain about the soundtrack. The voices are another story.

I’m not going to complain about the voice acting in general, because even though squealing high-pitched anime girls are like nails on a chalkboard to some, others love it.

What I will complain about is the fact that these characters talk non-stop during gameplay, particularly in Story Mode, and because the entire game is voiced in Japanese, it’s unlikely that the average English speaker will have any idea what they’re saying unless they read the subtitles in the bottom left corner. Good luck doing that while you’re trying to watch what you’re doing on the pinball table. It all adds up to a cacophony of noise that will likely make you want to turn off the voices entirely after a while.

Peach Ball is easily one of the best looking pinball games I’ve ever played. Both tables are extremely bright and colorful with lots of details to see on all sides, and they only get even crazier as you play. It’s like a rave is going on when you activate Super Fever Time.

The girls are also extremely well-animated, which is good since you spend the majority of the game watching them squirm and squeal as they get brutally assaulted by a fuzzy pinball. Speaking of which, I should probably make it clear here in case you didn’t get the message before – this game is M-rated for a reason. They stop short of showing any nipples or genitalia, but the characters will do pretty much anything else you can imagine. They’re also nearly always on-screen during gameplay, so be aware that this isn’t something little Jimmy can watch even if you avoid the lecherous side modes.

There’s no denying that the presentation here is incredibly well done, but the fact remains that Peach Ball is simply an average-at-best pinball game at its core. Playing through the 25 stages of Story Mode and unlocking items in Free Mode will provide plenty of longevity for those who seek it, but the lack of variety in tables and frequent brainless button mashing segments will likely leave you tired of the gameplay long before you see every last bit of content.

I can really only recommend Peach Ball to hardcore Senran Kagura fans. The pinball is flashy but ultimately just serviceable, leaving the presentation and fanservice as the main appeal. If you’re really into this series then this is an easy purchase, but if you just want some quality pinball, there’s plenty of choice in the eShop.