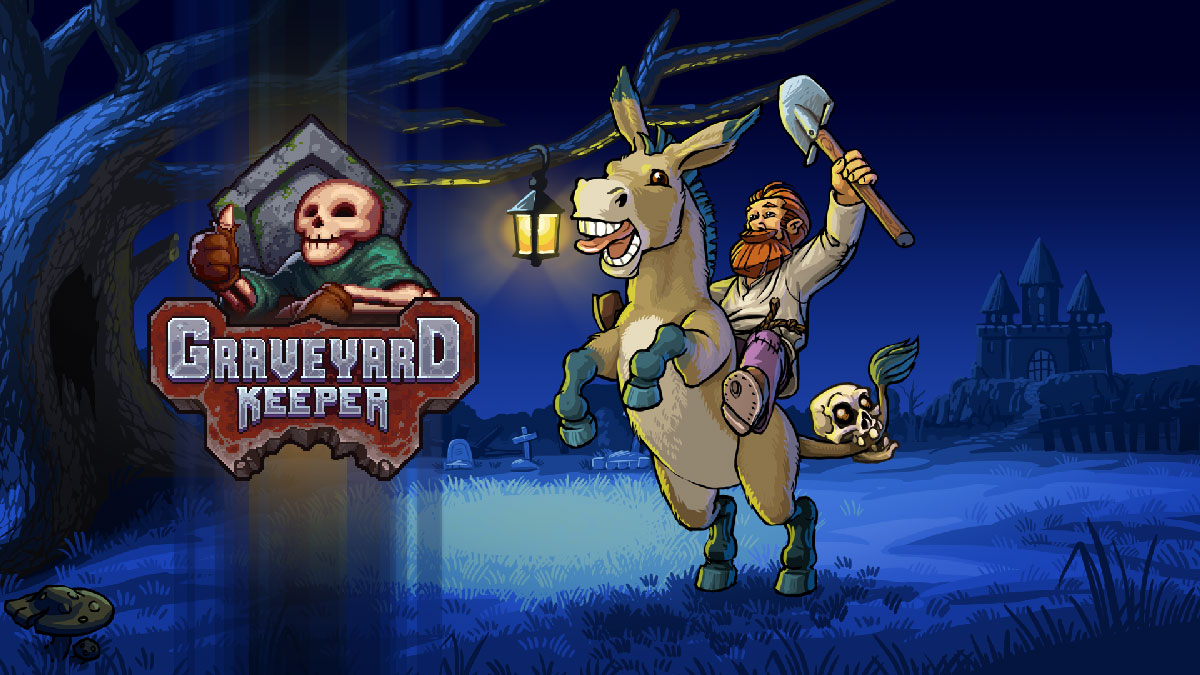 Graveyard Keeper was initially released on Steam and the other major consoles back in August of 2018. The game had been out prior to launch with an early access build which had gamers testing the medieval corpse burying simulation title prior to launch. Here in late June, a Nintendo Switch release is upon us alongside a $4.99USD DLC pack (which I haven’t had the chance to muck about with).

You start off your game with a short cutscene depicting your character’s untimely death via a car accident in a modern day setting. Moments later you wake up, accompanied by a talking skull named Gerry where you are quickly thrust into the job title Graveyard Keeper.

Your first moments in the game you meet a bishop, a talking donkey, and a shopkeeper and quickly are tasked with cleaning and fixing up the graveyard, performing an autopsy, and trading and selling those body parts for coin.

The title of the game, Graveyard Keeper, is only a small portion of the larger simulation you will be playing as you work your way back to life and the real world. Throughout you many hours in the game you will be doing some menial tasks like cutting down trees, smelting iron ore, building equipment, fixing up your surrounding village and town, and more…a lot more.

Many people before me have called this a spiritual counterpart to Stardew Valley, and while that isn’t wrong, I personally feel there is a lot more here than what you’d find in Stardew Valley. In some ways, Graveyard Keeper plays a bit like a top-down version of a Metroidvania-esque game with some farming, relationship building, and crafting thrown in.

What I mean by that is the game world starts off very small in where you can go and what you can do. It is only after you begin to talk with town folks and help them with their tasks that you gain abilities to go further from your home and build items you couldn’t at the beginning.

In Graveyard Keeper you should always feel like your tasks have weight and meaning to them as you gainfully progress through the game. Each thing you do in some way gains you points which can be used to unlock items, skills, and relationship points with townspeople.

Every time you cut a tree, pull up a flower or mushroom, craft something out of stone, cook a meal, trade an item, et al, you will be gaining points. These points can be used to learn new recipes, item crafting, and more within Graveyard Keeper’s skill tree.

The map in Graveyard Keeper is surprisingly huge. I oftentimes found myself planning my day out just so I wouldn’t be out too late into the night risking being attacked by bats or slimes or worse yet being too far away from my house without the ability to fix a broken pickaxe or shovel.

Along with the sprawling landscape, there are certain characters, key to many of the story-driven progression marks, that will only show up on certain days. Graveyard Keeper has a 9 minute day/night cycle and seven days in its in-game week system.

Essentially each day has a specific character showing up in their set place on specific days of the week. For instance, the Astrologer will be at his lighthouse on the ‘moon’ day and the church is open on the ‘sun’ day.

There are a lot of items to craft in the game from workbenches, gardens, gravestones and fences, church pews, furnaces, pies and shish-kabobs, and more. The various items you craft will help you in building up your Graveyard, home, garden, and more.

Along with the wealth of items to craft, cook, and grow, the world of Graveyard Keeper has a plethora of townspeople each with quirky dialogue trees and tasks to ask of you. As you trade with townspeople your friendship level grows and eventually unlocks new tiers of items with which you can trade for or learn to make on your own. Seeing as money is a hard thing to find, you will need to juggle crafting items for yourself as well as for others.

Graveyard Keeper does have an additional DLC item for sale on the Switch eShop. This item adds a bunch of controllable Zombies to your game which will help you complete those aforementioned tasks of maintaining your house and doing some of the extra time consuming tasks. I haven’t played with the DLC yet, but I have been told it does make managing your graveyard a bit easier.

There isn’t a lick of spoken dialogue in Graveyard Keeper though character dialogue and interaction does come with Animal Crossings-like gibberish, though maybe not as squeaky or sound-effect heavy. The gibberish does come in various tonal qualities so many of the characters to sound different enough when you interact with them.

On the music side of things, Graveyard Keeper has a dozen or so tracks which loop throughout the games night and day cycle. The audio is a decent mix and I often found myself humming along, or humming the song while not playing. That goes to say a lot of a game if its musical numbers stick with you even after your game session is over.

Graveyard Keeper has a pixel art style to it with nice subtle animations that accompany your various tasks and crafting. While you walk your character will leave footprints in the dirt, insects move around the night with a yellow glow, groundhogs burrow out of the ground, items that you need are distinct and unique so navigating the menu to find what you need isn’t difficult.

The game runs smoothly in handheld and docked mode, I only noticed some jarring slowdown a few times mostly when there were a few too many slimes or bats in the scene during a change of day to night or vice versa. This visual hiccup wasn’t too disruptive though.

Some other annoyances I noticed was text that bled out of speech bubbles and sometimes options in the dialogue tree would not be highlighted even though they were selected. These small annoyances weren’t enough to dissuade me from playing the game, but those graphical glitches are at least noticeable and annoying.

Graveyard Keeper is a game that can be played in whatever style and manner you wish. There is a lot of freedom in how you plow through the story quests, side missions, and layout your house and the land around it. I have a feeling that anyone that plays the game will find some part of it that they enjoy more than others like cooking over hunting, or crafting over preaching at the local church.

If Stardew Valley, Animal Crossings, My Time at Portia, and Harvest Moon style gameplay is something that interests and excites you, Graveyard Keeper will keep you entertained for hours. There is just a lot to do and take part in while you work your way through Graveyard Keeper.