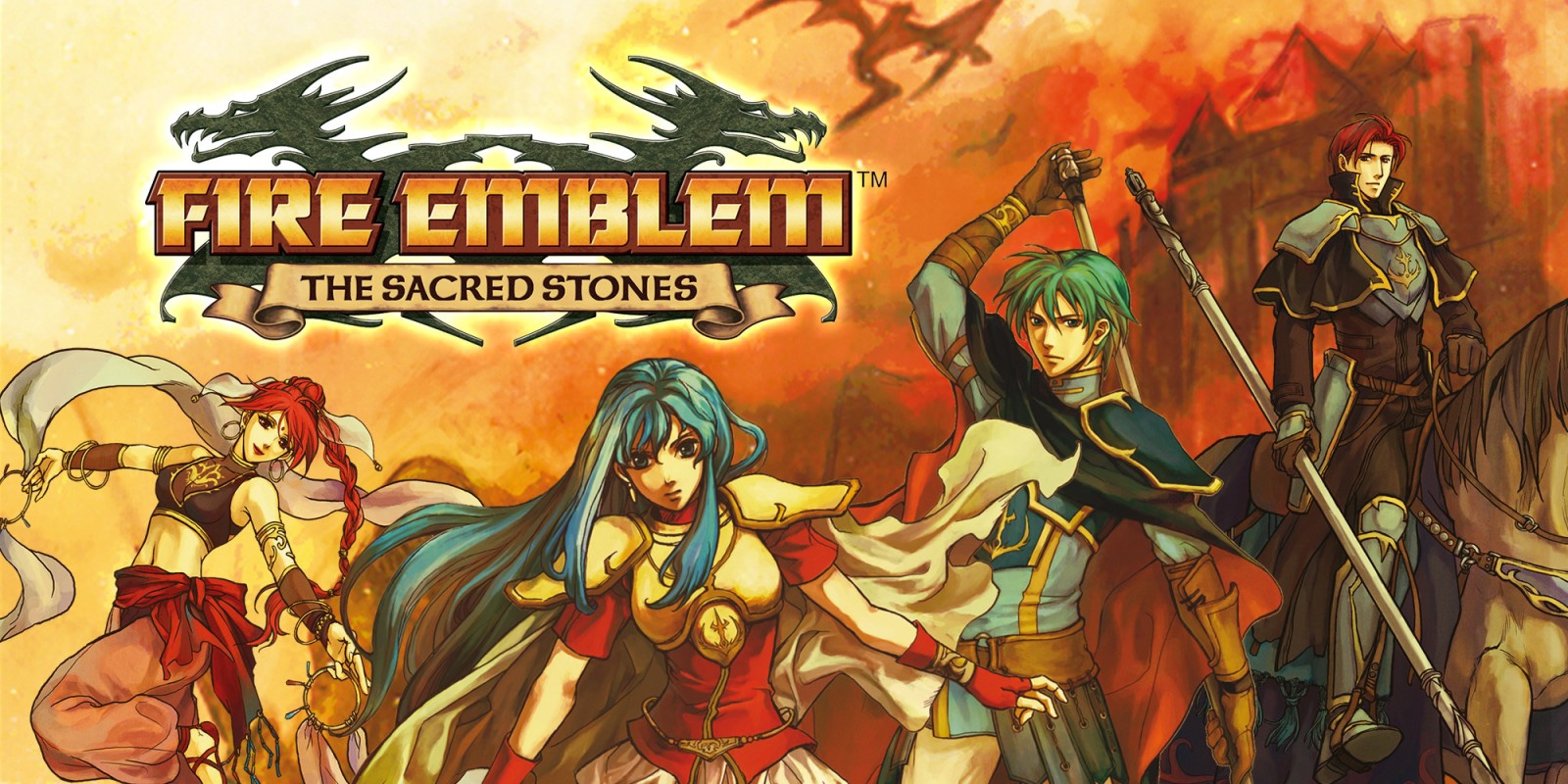 [Feature] Fire Emblem Frenzy #8: A Return to the Past

After Fire Emblem: The Blazing Blade spread the series across the planet, fans clamored for more. However, there was one notable problem with The Blazing Blade for some fans: it was too similar to its predecessor. The third and final Game Boy Advance Fire Emblem introduced few entirely new concepts, instead opting to expand upon Gaiden‘s ideas. One could argue that The Sacred Stones lacks a legacy, but I believe it began the shift in direction that polarizes fans today.

After Fire Emblem‘s 2003 release, Intelligent Systems began working on an entry for the GameCube: Fire Emblem: Path of Radiance. However, this entry would take time to finish, so a final Game Boy Advance title was created simultaneously. The Sacred Stones arrived in Japan in late 2004 and overseas in 2005. It would be fair to say that it was meant to hold over fans until Path of Radiance, though the stellar plot makes it notable to me. In general, it is a much easier title than Fire Emblem due to the returning systems from Gaiden, though the core combat was practically identical. The Sacred Stones would be the final original Fire Emblem on a handheld until Awakening, and it wasn’t a poor note to leave the Game Boy Advance on.

Set on the continent of Magvel, The Sacred Stones‘ universe is isolated from the rest of the series. Long before the events of the game, monsters roamed the continent, threatening humanity as a whole. Pleas to the deities were heard, and the five Sacred Stones were imbued with holy power. Five heroes, aided by the manakete Morva, used the Stones to destroy the Demon King Fomortiis. The monster’s spirit was sealed in one of the Stones, and the body was entombed in the Dark Temple. With Magvel expelled of monsters, each of the heroes founded a nation, and the world was at peace.

If you’ve been keeping up with the series up to this point, you probably experienced déjà vu reading the prior paragraph. Magvel’s backstory is just like that of Archanea, Jugdral, and Elibe. Evil plagues the land, a group of warriors appeal to the gods for help, then use mythological gifts to defeat said evil. However, Fire Emblem games have never had a strong plot on account of the backstory alone. Typically, the greatest Fire Emblems tell stories of moral grey that force the player to sympathize for characters that appear antagonistic initially.

Arriving in present day, the nations Magvel are being invaded by the formerly peaceful Grado Empire. The Sacred Stones are being hunted and destroyed, apparently due to the orders of the peaceful leader of Grado, Vigarde. In actuality, Lyon, the son of Vigarde, is possessed by the Fomortiis, and the war is meant to make the world suitable for the demon’s return. Eirika, princess of Renais, has fled the capital after Grado’s army invaded and killed her father, Fado. Her brother Ephriam engages in guerrilla warfare in Grado, eventually laying siege to Fort Renvall. Eirika arrives at Renvall after being convinced that Ephraim has been captured, but the two soon convene to capture the fort once and for all. Eirika journeys to other nations to warn of Grado’s aggression, while Ephriam sets out to capture Grado Castle. Eventually, the armies merge permanently at Jehanna, as the two siblings seek to save Renais from the turncoat Orson. Finally, they set their sights on the Dark Temple, where a possessed Lyon is attempting to revive Fomortiis.

The main plot of The Sacred Stones is decent, but as usual, the interesting aspect is the villain. The Blazing Blade has a relatively simple story, so The Sacred Stones introduced most western fans to the series’ grey morality. As his father grew ill, Lyon began to experiment with dark magic in an attempt to find a cure. A vision of a destructive earthquake spurred him to try increasingly dangerous experiments with Grado’s Sacred Stone to save those he cared for. Eventually, Lyon split the stone into the Sacred Stone and Dark Stone, causing Fomortiis’ spirit to possess the prince. When Vigarde died, the possessed Lyon revived him in order to destroy the Sacred Stones.

Eirika and Ephraim were Lyon’s closest friends in childhood, and when they meet the possessed prince, they don’t recognize him. The twins have periodic flashbacks in remembrance of the boy, creating much more attachment than past villains could ever hope to attain. Lyon is certainly one of the best written villains in the series; his character is developed alongside the protagonists, the goals that drove him to allow the Demon King to possess him are understandable, and there is a certain air of sadness and regret whenever he is present in a battle or cutscene.

The latest original titles, Awakening and Fates, have had relatively poor stories due to their shallow villains, so I hope that Three Houses manages to create a character as moving as Lyon. Considering the already revealed politics involving Garreg Mach Monastery and the three nations of Fòdlan, (Which I will remain ambiguous about in case you are trying to go into the game entirely blind), I wouldn’t be surprised if Byleth, his father Jeralt, or the House Leaders have past relations with the antagonist. Intelligent Systems seems to be moving away from the idea of an entirely “self insert” protagonist, so hopefully Byleth will have meaningful pre -established relations instead of being an amnesiac. Lyon is a masterfully written villain due to his past experiences with the protagonists. His writing is certainly the best part of The Sacred Stones.

All three of the Game Boy Advance titles have similar gameplay overall. The turn based battles, weapon triangle, and weapon durability have been untouched. However, The Sacred Stones brought back some of Fire Emblem Gaiden‘s concepts, which were all but abandoned by the series. These concepts had never been seen by western audiences before, so one could justly view The Sacred Stones as the “Gaiden of the West”. It definitely would have made sense for Intelligent Systems to test western reception of concepts previously thought to not belong in Fire Emblem. Ironically, the systems brought back have become series staples, as Awakening and Fates made extensive use of them.

The first idea revived by The Sacred Stones is a world map, and by extension, extra skirmishes. Eirika and Ephraim can traverse a map between battles, revisiting old shops and battling battalions of monsters that they encounter. This makes the game much less linear, and allows for unlimited experience and shop purchases. This removes some of the strategy, as enemy kills don’t have to be deliberately split to distribute limited experience, and there isn’t any sort of pressure to stock up on items while at a shop. These factors made The Sacred Stones the easiest Fire Emblem of its time. Sometimes it felt too simple, whether due to having too much experience from extra skirmishes or simply due to less psychological stress.

I highly doubt extra skirmishes will ever be removed. They were included in both Awakening and Fates, and are confirmed to be present in Three Houses. This adds to the discussion about being able to mold one’s Three Houses journey as they wish (Brought up in Fire Emblem Frenzy #7). Will it be possible for one to avoid extra skirmishes if they wish to complete extra side quests? How will the leveling of Three Houses scale? Will one be expected to grind? Will there be gameplay features that can’t be overcome through grinding alone? These are the questions that have to be answered. Considering that Three Houses is clearly designed to heal the rift between Fire Emblem fans, I’m excited to see what solutions Intelligent Systems comes up with.

The other major feature returning from Gaiden is the branching class system. Most Fire Emblem games up to this point had linear promotions; a Cavalier became a Paladin, a Mage became a Sage, etc. However, in Gaiden, certain characters started as a special Villager class, which could promote into one of five classes. The Villager class returned in the form of Trainees, which were given two class lines to follow. However, the entire class system received the Villager treatment: almost every character had multiple promotion options! Not only did this allow for replay ability, one could also use their favorite characters without running the risk of having too much of one class.

Sadly, the branching class system would be absent in the Tellius Fire Emblem games. Shadow Dragon would allow units to change into any class they wished; a different take on class customization. Awakening combined the two: each character had a base class and a few optional secondary classes, with each having multiple promotion options. Three Houses looks to have the most robust promotion system, with about five tiers, based on screenshots. The return of branching classes was one of best aspects of The Sacred Stones, if not the series as a whole.

The Sacred Stones marked the return of another system, though it didn’t have origins in Gaiden: skills. While not exactly like the Jugdral incarnation, the skills of The Sacred Stones marked the return of a system that has been present in all original Fire Emblem games since. Certain classes come with skills, such as +15% critical hit chance or extra damage to monsters. This made each class feel more distinct, which helps make the class promotion decision far more impactful. Admittedly, this version of skills is rather limited, but the modern iteration will appear in the next entry, Path of Radiance.

The Binding Blade and The Blazing Blade are quite similar visually. The Sacred Stones is a bit more detailed, but it still looks similar to its predecessors. This would be the final fully pixelated Fire Emblem game; future entries would be entirely 3D or a mix of sprites and 3D. However, the Game Boy Advance Fire Emblems don’t look poor, so this isn’t a bad sendoff to the style that had been present since 1990.

It’s true that Fire Emblem: The Sacred Stones didn’t add entirely new ideas to the series. However, I believe that the revival of Gaiden‘s Systems was contribution enough. The systems brought back here would be the backbone of modern Fire Emblem, and are now staples of the series. The story is one of the series’ best, with a personal relationship present between the heroes and villains. The final Game Boy Advance Fire Emblem was a stellar swan song to the platform that gave the series so much.