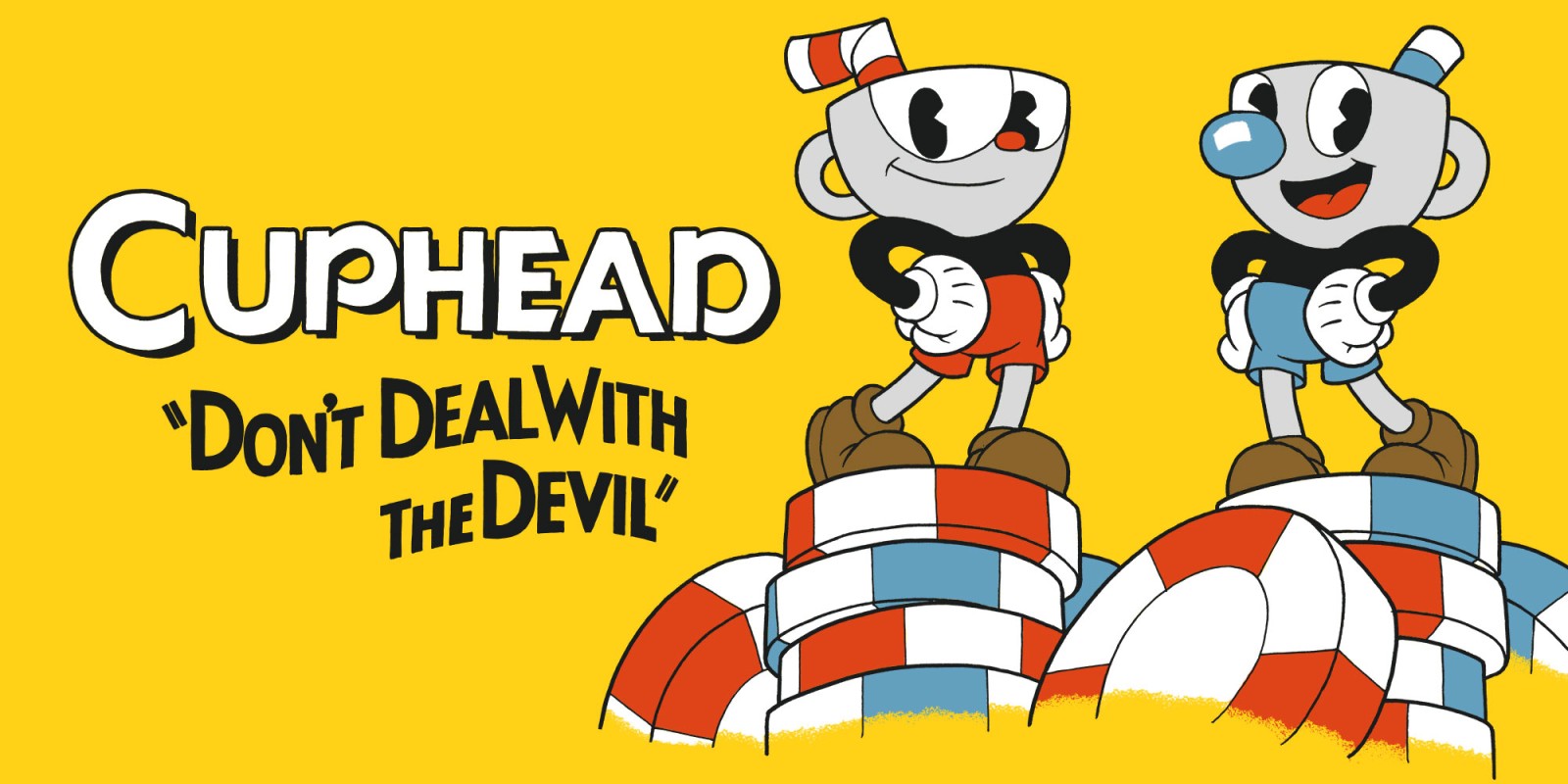 This match will burn red hot! Are you ready to explore the world of Cuphead?

Microsoft and the Xbox brand, in general, have had a rocky generation with the Xbox One. Not enough solid exclusives to entice consumers to pick up the new platform, and nothing really stood out until Studio MDHR released Cuphead back in 2017. Nothing truly took the world by storm quite like Cuphead did, when it released.

As someone that picked up on the project early on in its development cycle, it felt like there was a missed opportunity not having the game on a portable console. Enter the Nintendo Switch version, the answer to all of my hopes and dreams.

When imaging Cuphead being playable on a Nintendo console, it seemed like this dream of mine would never become a reality. Microsoft was there to save the day, as they snapped their fingers and created the ideal port of one of the greatest indie titles of the 2010s.

At its core, Cuphead is a challenging platformer based around boss battles and a few run and gun dedicated levels. The art-style has been designed to mimic the golden era of cartoon and animation, nearing a resemblance to Steamboat Willie.

Players have the option to take control of either Cuphead or Mugman, along with the ability to play couch co-op with a friend locally. Unlike most modern platformers, Cuphead does kick off with a rather unique story. Cuphead and Mugman lived peacefully in Inkwell Isle under the watch of the Elder Kettle.

Despite warnings from the Elder Kettle, the boys stumbled upon the Devil’s Casino. To their surprise, Cuphead and Mugman were on a winning streak at the Craps table. The Devil approached the table and offered a bet: if the duo won, they would get all of the loot in the casino, but if they lost, the Devil would take their souls. Cuphead rolled snake eyes, resulting in a battle to retrieve all of the Devils debtors’ soul contracts by midnight.

Looks will fool you, and this is exactly where Cuphead shines among the rest. The hand-drawn visuals will hook you in, but the gameplay offers much more than the eye reveals. That’s not to say that this is the “Dark Souls” of platformers, it definitely isn’t, but the game is no walk in the park either.

There are no tricky combinations or specific button presses to pass levels, as the characters simply walk, jump, dash, parry, shoot, switch weapons, and hit special critical attacks. Each boss is split into phases, where certain weapons are better used on one boss whereas the load-out you currently have may be rendered useless against another.

The game revolves around strategy, patience, and learning the maneuvers of the bosses themselves. One boss might take you ten minutes to overcome, while another might stump you for several hours. By taking the time to learn where bosses will hit and how they’ll hit, levels become significantly easier to overcome.

Cuphead is split into several worlds, with the difficulty steadily increasing over the course of the levels within each world. Thankfully this time around, there is no sudden difficulty spike in the middle of the game. It’s all about learning which weapon types work where and which skills would be most useful in the given scenario.

No two levels are the same, as each boss has its own theme and orchestrated music. The world of Cuphead feels as diverse as it looks, with level types not overstaying their welcome. Moving around the overworld also gives players a taste of what’s to come without fully revealing what to expect within each level.

If you’re worried about Cuphead not being difficult enough, completing the entire game opens up an expert mode, where the game moves much quicker than it does at the standard difficulty. Also unlockable is a black and white filter option, but we’ll keep that unlock a surprise.

Besides your typical boss battles, the game does offer a nice change in scenery with several traditional platforming levels. Each of these is completely different from the last, and they offer a nice change in how the game is played. Unlike boss battles, these levels don’t change each time you play them, so reaching the end takes significantly less time than a boss takes. The challenge here revolves in collecting gold coins, which can then be used to purchase new weapons or charms.

Once coins are collected, players can stroll on over to Porkrind’s Emporium to trade coins in for a new charm or a new weapon. Charms are essentially additional skills that can be applied to Cuphead and Mugman, which grant additional bonuses such as giving the player an extra heart or two.

In total there are eight different weapon types, each offering a different way of moving through levels. Some weapons focus on high damage while lacking range, forcing the player to fight from close by. Other weapons may focus on range while lacking damage, which encourages players to flip-flop between weapons in the middle of battle.

The standard layout allows players to equip two weapon types at once, adding in another layer of strategy when entering levels for the first time. It’s recommended to switch the weapon layout for each level, but learning to skillfully use just two weapons seems like the best option.

As for charms, players are able to use one at a time, which mixes up the gameplay in more ways than one. For example, a heart charm is available for purchase which adds another heart to the players’ total health points, but slightly weakens attack power.

Each weapon has its own special that can be used once the playing cards at the bottom of the screen are filled up. Filling up all five will cause them to rotate endlessly, notifying the player that their special is ready for use. Having anything less than five cards allows players to use smaller signature moves, which deal a good chunk of damage on their own.

Playing cards are filled up as damage is done to enemies, which makes killing each enemy in a level rewarding in the end. Although not as powerful as the final special move, these smaller moves can be used with little risk as they last a few seconds whereas the final special lasts a little longer.

My biggest issue with Cuphead lies here. After dealing a special move (filling up all five playing cards), the player isn’t made invincible which can cost a heart point if not used carefully. With only three heart points, saving each heart is crucial to surviving levels and ending with a solid grade at the end, which is why the decision to not give invincibility is puzzling.

Rather than being bought, special moves are earned through each of the three distinct worlds, meaning that there are three different special moves. Reaching the haunted museum locations places players into a parry battle with many ghosts, and if they reach the middle before being parried, the “level” restarts.

Returning to the core gameplay, there is nothing quite like hitting a knockout on a boss that you’ve spent all day on. The sweet taste of victory after scoring a knockout on a difficult level is unmatched and is one of the main reasons why I continuously played levels because I knew that I would eventually score the sweet victory that I desired.

Each phase of the boss battles are quite distinct from the last, so it is nearly impossible to know what to expect on the first run-through of a level. That’s the beauty of Cuphead.  Once a level is played for the first time, it’s quite hard to put the console down until the level has been beaten. The hand-drawn characters and orchestrated soundtrack make levels a joy to play and brought me back in time after time.

The hybrid nature of the Switch made returning to the Inkwell Isles much easier than it was during my first playthrough on the Xbox One, and it’s safe to say that this is a carbon copy of the versions available on other platforms. No lag, no frame rate drops, and nothing that interfered with the gameplay.

After running through the game on Xbox, it’s clear to me that the Nintendo Switch version is superior to it in every way. Even with the lack of a d-pad on the Switch console, playing the game in bed was a joy because of how much the game felt at home on the system.

On a Nintendo platform, you are bound to find hundreds and hundreds of platformers flooding the eShop each day on the Switch, however, Cuphead is completely different then the rest. Controls are buttery smooth, the art design is aesthetically pleasing to look at even when a boss has mauled through you twenty times, and the jazz orchestrated soundtrack is a masterpiece to listen to.

Although Cuphead is a game better judged by its gameplay rather than its looks, the game is a joy to play and one of the best indie games to ever grace a system. Whether this is your first time jumping into Cuphead or your fifth time, there is a lot of fun to be had here with the Nintendo Switch version. Playing the game virtually anywhere with a friend is one of the best joys to be had, and my friends and I had quite a blast playing through the various worlds and slaying some of the hardest boss fights we had ever encountered.