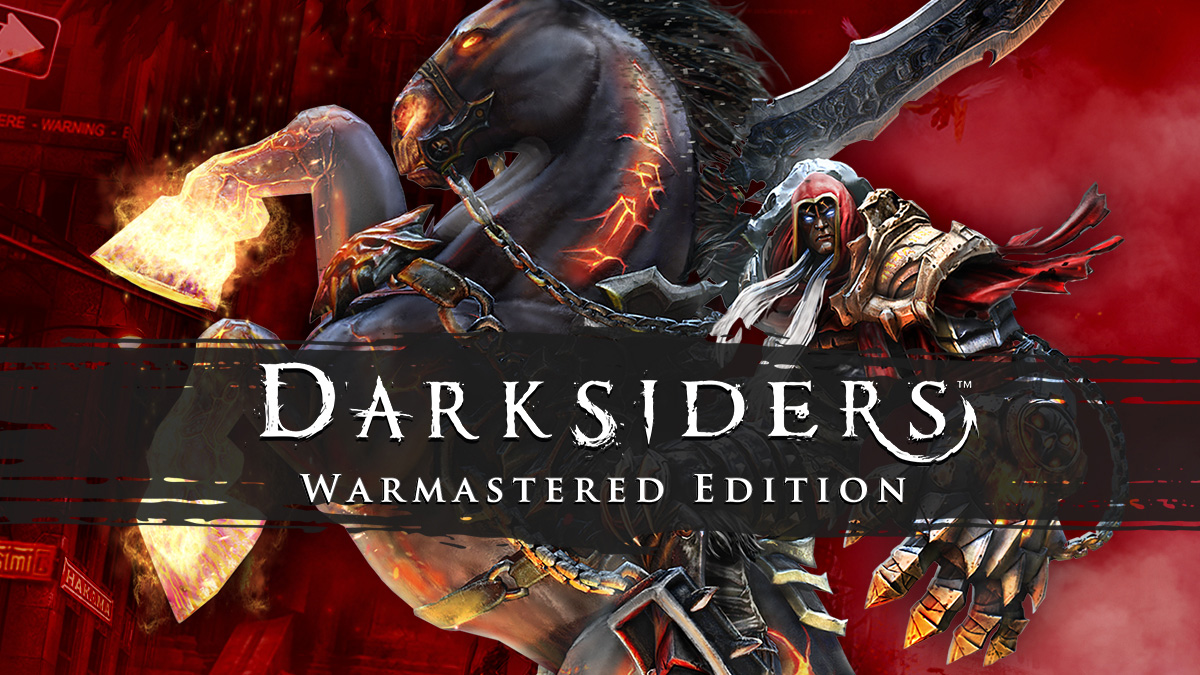 To Hell and Back Again: An Apocalyptic Tale.

Darksiders: Warmastered Edition, from here on out simply referenced as Darksiders, is a remastered version of the 2010 game that was remastered for the Xbox One and PS4 and initially released in 2016.

THQ Nordic has slowly been releasing remastered versions of games on the Switch since its initial launch working alongside smaller developers to bring ports to the Nintendo console in droves. THQ Nordic has previously published remastered games for the Nintendo Switch like De Blob 1&2, Legend of Kay, Sphinx and the Cursed Mummy and many more.

The Warmastered Edition of Darksiders has been previously released on Xbox One, PS4 and Wii U. Currently, Darksiders Warmastered edition is included in the Xbox One’s GamePass and is also currently listed $10 USD less on the more powerful home consoles than it’s $29.99 USD price tag for the Nintendo Switch. While this is a new entry for the Switch, the extra ‘tax’ so to speak is one you will have to consider if you want to have this game on the Switch to play on the go.

When it was initially released in 2010 and later again remastered and released in 2016, Darksiders was given a lot of praised and received generally well. This helped spawn two other games in the series and having played the Switch version of Darksiders, I hope this means we will soon see the ports of Darksiders 2 (Deathinitive Edition) & 3.

Darksiders was first referred to me as “Zelda for Adults” with a bit of Metroidvania backtracking with a more focused linear hack ‘n slash adventure title. From the initial cut scene to the closing credits, Darksiders does very little to let off the gas when it comes to adventure and for the most part, is wall to wall action set pieces that each try to one-up themselves.

In the opening sequence of the game, you are delivered a narrative through illustrations and beautifully rendered CGI, that unfortunately isn’t used much throughout the rest of the campaign. As things unfold though, you do get to see the story through cut scenes which use the in-game assets and a great ensemble of memorable characters.

If you never played the original Darksiders, the story tells about the apocalypse and the war between Heaven and Hell. The four horsemen were supposed to show up, but only War is present. This sets off an investigation by the council which points to lies and deception by War, who now has to clear his name while serving both the angelic and demonic forces that have now taken over Earth.

Darksiders blends a bit of the fantastical with the real world and many in-game settings will have you roaming across city streets and buildings while towering above on highways and skyscrapers. Another section of the game takes you underground to subway channels in a winding waterworld that has been flooded. The visceral feeling of decay and destruction sets the stage for some epic locations each which feel very different as you move from one to the other.

The main campaign for Darksiders is very linear, though some sections of the game allow you to complete certain tasks in any order you wish before progressing. Along with mission objectives that are usually marked on your map, there are souls to release from the various enemies that you will encounter which you can use to unlock upgrades and weapons. Throughout the various areas, you will also find treasure chests and artifacts littered throughout the map, some of which are in the furthest reaches and hidden in hard to reach places.

Early in the game you will meet Vulgrim, a demonic being that acts as a beacon for fast travel as well as the shopkeeper for weapon and skill upgrades. Throughout your campaign you will gather souls, and lots of them. These souls are the currency in which new weapons and skills can be purchased and added to War’s arsenal.

Darksiders at its core is an action game with the sword attack mapped to Y, and your secondary attack weapon mapped to X. As you gain new items you will be able to switch out which item is your secondary weapon from ‘The Harvester’ which is a large sickle, to your horn ‘Earthcaller’, a ‘Tremor Gauntlet’ and many more. War jumps by pressing B and later learns a move that allows him to glide by holding down B.

The A Button allows War to interact with certain objects, like activating switches, smashing chest to open them, and push and drag blocks to aid in reaching higher altitudes. The shoulder and trigger buttons allow you to cycle through enemies and focus attacks on them, as well as activating some of your gear, or my favorite the Crossblade which can be thrown at enemies or used to activate bombs.

In a lot of ways, the weapon progression in Darksiders is akin to the Legend of Zelda series of games, as you start out with nothing and slowly amass a large number of weaponry, skills, and abilities, and more. The Crossblade is similar to the boomerang, the sword and its attacks remind me of The Wind Waker and Twilight Princess and the various move-sets you learn along your journey to strengthen Link for battle.

There are also traversal mechanics that you will learn like the ability to break ice shards blocking your previous paths or finding the horn which opens up the rock golems which guard sections of the world.

Fighting in Darksiders is also very involved and includes a deep upgrade system that on the surface seemed more hack ‘n slash. As I gained new abilities, by buying them from Vulgrim, upgrade management quickly became a juggling act of balancing stylish attacks, stronger maneuvers, or costly upgrades that dealt more damage.

Along with upgrading your primary weapons you can slot in weapon enhancements which gave either defensive or offensive boost, but sometimes came at a heavy withdraw of another ability. The balancing act of weapons, upgrades, enhancements, etc meant encounters in the game were different with each playthrough, or was time I decided to switch things up mid-gameplay session.

Darksiders has a lot of content in terms of world building, characters, story narrative, weapons and upgrades, and more. There is a lot of game packed in the download or physical version of the game and you will not be disappointed.

Another new feature which is starting to pop up on some developer games is the setting to change between High Performance or High Quality video options. What this means is that you can opt for a better visual fidelity in the game, which I noticed more in docked mode over handheld mode.

The visual performance high quality goes at a lower framerate for the game, whereas high performance means the game will run smoothly but with lower quality visuals. I myself didn’t notice too much difference, though Darksiders is a game that will tend to make your Switch run a bit warm, especially if you play it for a long time.

Transitioning from the high quality visuals/performance quality settings, Darksiders is a game that has a lore and design that isn’t matched on the Switch, except maybe in games like Dark Souls, Skyrim and Doom. The demons in Darksiders are massive in size and sometimes as the camera pans out, Death looks very tiny set against the large looming boss fights and the larger vistas.

One boss early on in the game, Tiamat, an enormous bat-like creature with a sprawling wingspan and clawed hands and legs towered above the cathedral you first encounter them in, was overwhelming to look at. Each monster was impressively design and unique. The horns curled and clawed fist animate smoothly and felt as if they could exist.

The counterpart to the demons were the angelic soldiers from Heaven. These winged creatures looked more humanoid, and somewhat elf-like, though their eyes had a white emptiness to them that I still can’t get behind the design of.

The angels looked more similar to each other where there were only a few body types used in the game. Their wings and spears and swords were less impressive visually, though they felt more regal in appearance which fit with their haughty characterization in the game.

Darksiders has a variety of orchestral tracks and booming sound effects that were well done. Nothing really stood out to me audibly in the soundtrack, but overall it was very fitting musically. On the character side of things, the voice acting is over the top but well done. Vulgrim had a vileness in his voice that felt sleezy. He creeped me out a bit too when you would be shopping and he would tell me that I made a good choice or that my purchase was worthy.

Other characters throughout the game were voiced by well-known actors including Mark Hamill, Troy Baker, Liam O’Brien, and Phil LaMarr. Each character did a great job with their voice, though Mark Hamill as the Watcher was probably a bit too ‘Joker’ voice for me.

Though nothing has changed to really differentiate it from its previous releases on other systems, Darksiders is still a great game that is very enjoyable and challenging to complete. If you haven’t played Darksiders yet on either the Xbox 360/PS3 or the updated Warmastered Edition on Xbox One, PS4, and Wii U, you will want to pick up the Switch version.

The game has enough exploration and adventure to feel a bit Zelda-like. There is plenty of backtracking in the game that reminds me of Metroidvania style games as well. The Switch’s library of demon infused games is growing and Darksiders is a contender for one of the best ‘Hell on Earth Apocalypse games’. You would be remiss to not do yourself a favor and pick this game up.