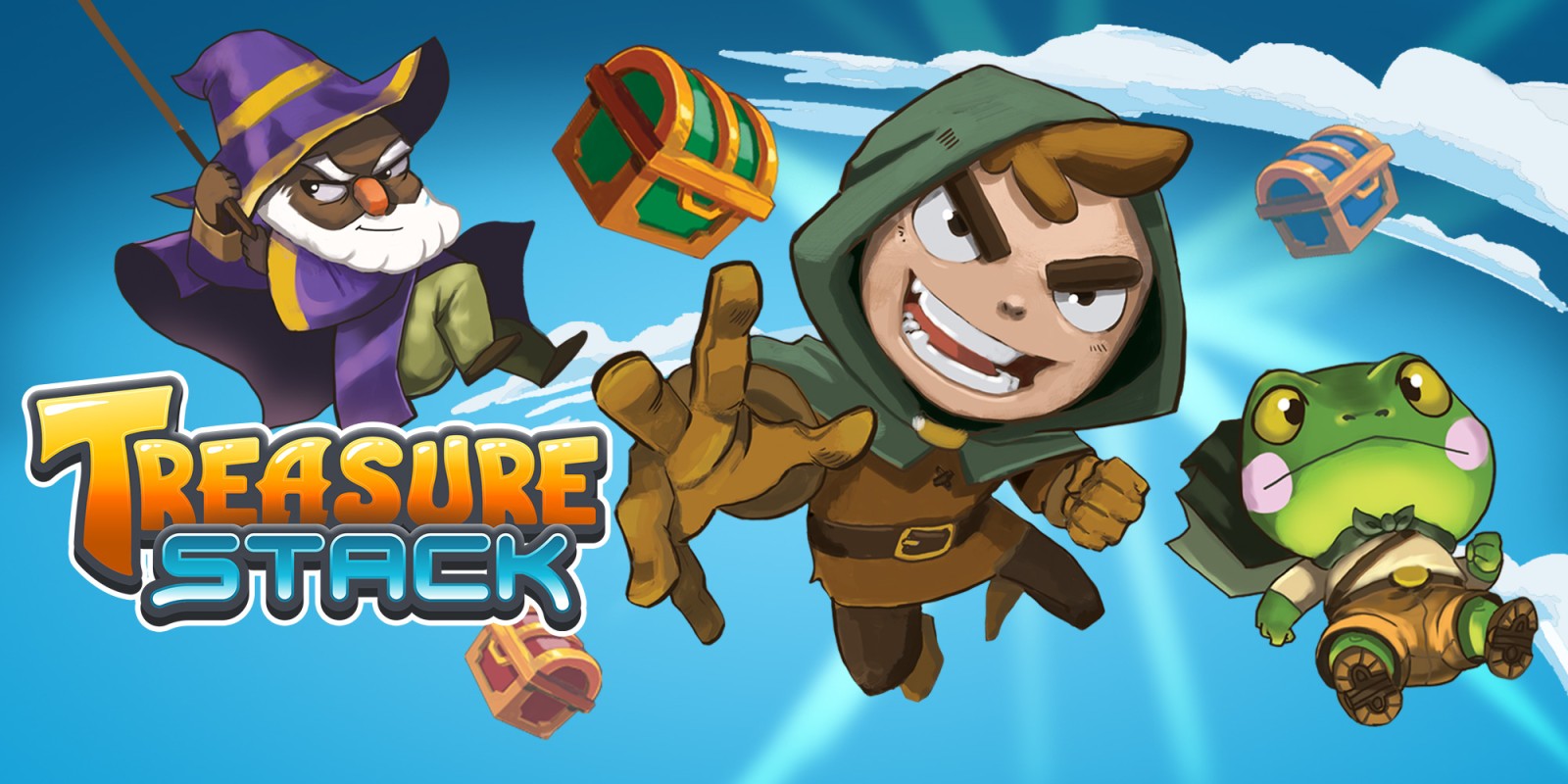 Treasure Stack draws clear inspiration from the oft-overlooked, and seldom emulated, Nintendo puzzle game Wario’s Woods. However, it adds a few twists to the formula that make it stand on its own merits.

To recap for many out there unfamiliar with the first game on a home console to star Mario’s greedy counterpart (which originally released for the NES!), Wario’s Woods is a falling block puzzle game where you control Toad arranging specific colored animals on screen to be cleared by like colored bombs for a high score. Treasure Stack eschews the retroactively uncomfortable idea of blowing up cute creatures, and instead replaces it with treasure chests containing coins, and keys to unlock them.

Building upon the idea that you are arranging falling treasure chests in a strategic manner, when you manage to open and clear the chests with a key, the coins you earn by opening them will accumulate like experience points, and as you level up, you unlock new playable characters and grappling hooks. Grappling hooks are used to pull the treasure chests down to your character for quicker placement. Once the treasure chests are placed on the ground, you can then grab the top chest and move it however you like.

This system enables you to better distribute your chests while waiting for appropriately colored keys, and to group your chests together by color when possible. After so many chests drop, you will be given a line of dead blocks (similar to those that you get in Tetris versus modes that can’t be cleared, although you can at least clear these ones). In addition to chests and keys, there is also a wild key that clears the color it touches immediately, and weapons blocks. Weapon blocks come in a few varieties- the sword can be used to slash a few chests/blocks away, the bomb blows up so many chests/blocks in a certain radius, and the anvil block drops in a straight line, destroying each block in its way.

Treasure Stack offers online play, local party play, and single player. The developers made an interesting choice when it comes to increasing the game’s difficulty as you play. In most puzzle games, the blocks begin to fall more quickly, or the workable part of the screen becomes smaller, and when playing in versus mode, you have dead blocks (or just random blocks) that pop up on your side when your opponent clears enough lines.

Still, while there is still a bit of the last one in Treasure Stack during versus play, you get dead blocks much more frequently in single player mode, and it serves to make the game less enjoyable. This one little choice makes the game’s learning curve infinitely more difficult to overcome at first, because the dead blocks come so quickly and interfere so completely with any strategic placement that you have been working on the last few drops is almost completely reconfigured to the point where you may as well just give up on them and try your best to clear new chests as they fall and try to concentrate your dead blocks in a manageable area when possible to clear them when a weapon block comes

Compounding this problem is the infrequent key drops. It’s one thing to create challenge by making you match up like color chests, but I’ve gone what seems like a full quarter screen worth of drops without getting a key. Also problematic is that if a key drops with a like-colored chest, you must yank it out of the air and position it specifically on or next to other like-colored chests, or it clears instantly with just the one chest it came down with it.

While Treasure Stack is an improvement over Wario’s Woods in most regards, it does a lot to make the experience less enjoyable in single player mode because of the choices mentioned above. It is kind of cool that they implemented an experience system and you can earn unlockable characters and grappling hooks, it actually seems rather pointless because you don’t control what you unlock, and the unlocks are completely aesthetic. There is no difference between characters or grappling hooks, except their appearance.

A way that this could be improved, is if they cut a few of the characters, and gave them each a special ability or boost. Price them accordingly, and let you spend your coins how you wish. This could also be applied to the grappling hooks, where each grappling hook could do something like suspend one chest midair and allow you to grab and place the next one in sequence. Maybe one could be used to slam the chest you grab like an anvil once every few clears. Characters could have limited use abilities to slow down the chests or increase spawn rates of certain colors. One character skin looks like a dragon, maybe give it the ability to breathe fire and burn away a chest/dead block.

As it is, however, the flavor of unlocking chests to retrieve coins to automatically “buy” new character and grappling hook skins is clear, but poorly implemented compared to what could be done. Opening up these options could also expand on the depth of competitive play. You could set rules online or locally to disallow certain grappling hooks or playable characters or have a free for all mode.

I know that I seem to have been beating up on Treasure Stack a bit much, but really, it is a fun local party game. At least, it is once your opponent also gets over the initial learning curve. Once you recognize the game’s features and challenges and learn to manipulate the blocks a bit more smoothly and properly grapple chests, then it does become a fun puzzle game. However, it could be so much more if the developer expanded on their idea behind currency working as experience, especially if they implemented a scenario with a character with a scalable skill tree.