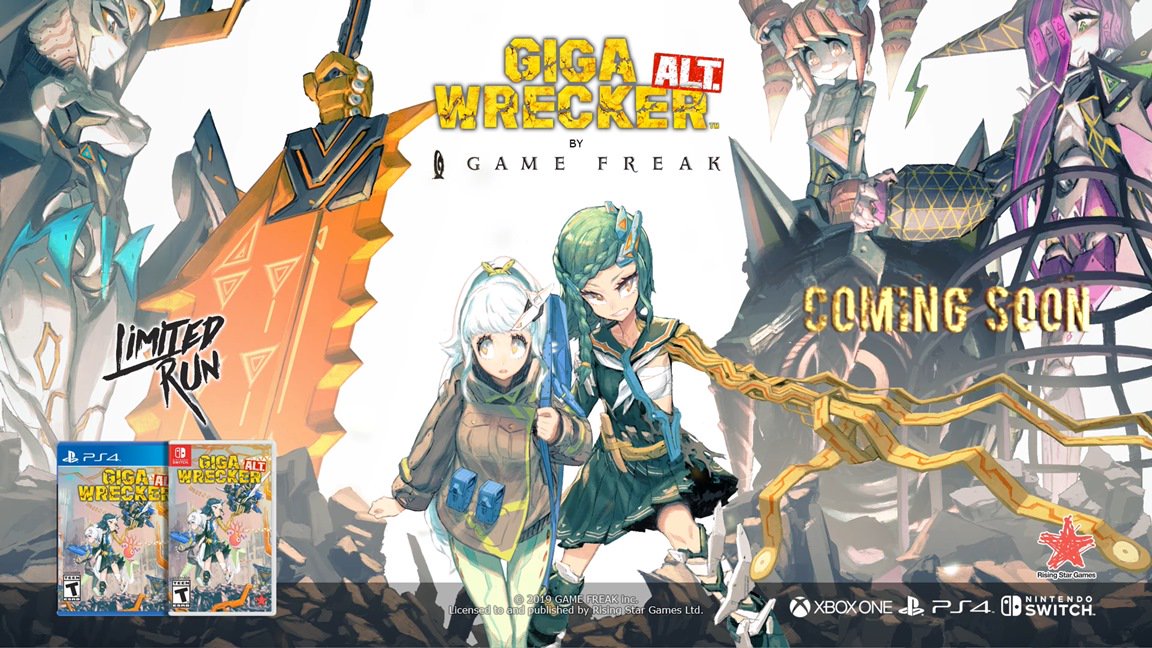 Looks like 2019 is going to be an even busier year for GAME FREAK as far as the Nintendo Switch is concerned. On top of Pokémon 2019 and TOWN, the previously outed GIGA WRECKER Alt. will be making a splash as well and helping to bring it to the west, is none other than Rising Star Games.

Furthermore, since the game is not a Switch exclusive, it will also make its way to the PlayStation 4 and Xbox One this year and Limited Run Games will be helping to provide a physical release for the Switch and PS4 release. The full announcement from which this news stems from, can be seen here:

London, UK – January 17, 2019 – Rising Star Games, part of the Thunderful family, and Game Freak Inc. are excited to bring the 2D action/adventure and metroidvania inspired game, GIGA WRECKER Alt., to the Nintendo Switch™, PlayStation®4, and Xbox One digital stores later this year. We’re also proud to announce Limited Run Games will distribute the PlayStation®4 and Nintendo Switch™ physical versions. GIGA WRECKER Alt. comes to consoles with brand-new content that adds 20 additional puzzle stages to its campaign, a new companion character to assist players with the game’s increasingly challenging puzzles, and an “Ironman” mode with 5 times the damage than the regular mode. “We are excited to be working together with Rising Star Games and Thunderful to bring GIGA WRECKER Alt. to console gamers around the world.” said Game Director, Masayuki Onoue.

GIGA WRECKER Alt. establishes a 2D world for navigating platforms and solving increasingly challenging puzzles as players progress to unearth the mysteries of a sudden invasion that left the world in ruins. As players explore, they’ll use the abilities of Reika – that game’s main protagonist – to destroy and reconstruct their surroundings for solving each puzzle and fighting back against the invaders.

GIGA WRECKER Alt. is a mixture of exploration and physics where players can bring down towering walls and then use the rubble as a platform for navigating each level. Reika has a power known as ARCHE (Arms Creating and Handling Effect) that allows her to construct various weapons from rubble and scrap. This ability helps her create and navigate platforms, beat traps, and destroy enemies. Of course, there’s also the ability to crush enemies with falling objects as well.

GIGA WRECKER was brought to life through Game Freak’s internal “Gear Project” where its developers are encouraged to come up with intriguing ideas for games outside the company’s normal. The game also features music by video game composer, Shinij Hosoe, known for Ridge Racer and Tekken, among many other titles.