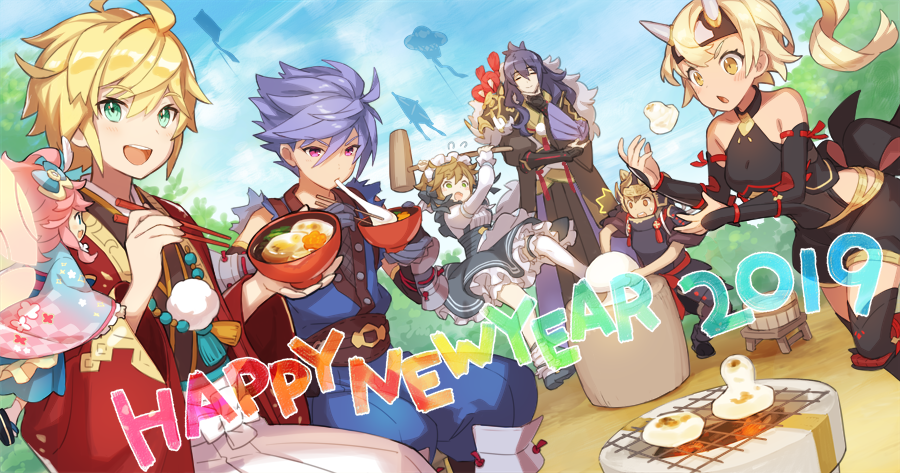 January 2, 2019 2:04 am Published by Switch Nindies Leave your thoughts

With The Miracle of Dragonyule being a thing of the past, Dragalia Lost has kicked off its festivities to help ring in the New Year! With it arrives a new event, summon showcase, bundles, and more! The latest Raid event in Dragalia Lost has kicked off dubbed “New Year’s Tidings: Fortune from Afar”, and with it comes various new event elements, limited-time units, dragons, and more. Are you ready to celebrate with the cast of Dragalia Lost and some new faces from Hinomoto?

What is a raid event?

What is “New Years Tidings Fortune from Afar”?

New Years Tidings Fortune from Afar is Dragalia Lost’s fourth Raid event and will be a limited time event that has a central elemental theme.(Example: Loyalty’s Requiem was a Flame based event that took place in a volcano, had players fight flame attributed monsters and take down a powerful Raid Boss, which had a flame typing.)

During this kind of a Raid Event, players can obtain a new character and play through a special story chapter, made up of playable levels and story-focused instalments. There are also Boss Battles and Raid Boss levels where players can team up with the teams of other players, resulting in an epic battle of 16 adventurers against the Raid Boss. Achieving success can earn players plenty of great rewards.

What can I expect from New Years Tidings from Afar?

By achieving the maximum friendship, the temporary character Botan will stick around, as you have earned the right to keep hold of her, long after the event has ended. Botan will also keep the level you have attained with them. Additionally, it has been speculated that she is a 4*  who is of the shadow typing and uses a lance.

Along with the above Raid event, a new Summon Showcase has also been added featuring new adventurers of the “Shadow” element and even one of the “Wind” element.

Marshiten is the 5* focus dragon of the Eastern Emissaries Summon Showcase. She represents the boar and is of the Shadow element.

Ieyasu is a 5* blade-wielding hero who is of the Shadow element.

Sazanka is a 4* Axe wielding hero who is of the Shadow element.

Finally, Addis is the final new character who is a 4* blade-wielding hero of the wind element.

Lastly,  the developers have started a Log-In bonus until January 25. Login for a total of seven days to receive up to three 10x Tenfold Summon tickets, & a total of 2,000 Wyrmite.