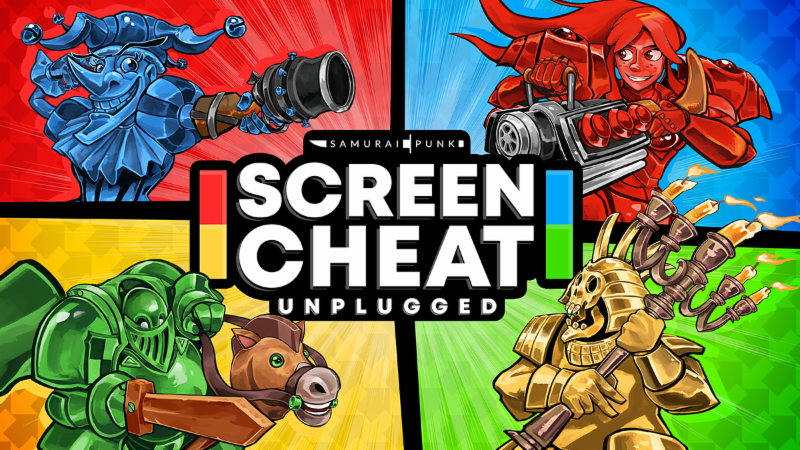 Samurai Punk are Bringing Screencheat: Unplugged to Switch this November

A trailer and the official announcement relating to the reveal can be seen here:

Available now for Pre-order, Discounted via the Nintendo eShop

MELBOURNE, VIC. – Nov. 19, 2018 – Screencheat: Unplugged, a fully remastered and revamped version of the chaotic party split-screen first-person shooter where everyone is invisible, blasts its way to Nintendo Switch™ on Nov. 29, 2018.

Samurai Punk’s Screencheat: Unplugged features a myriad of improvements over the original release, as well as alterations tailored just for the Nintendo Switch™, including: a graphical overhaul with more vibrant and clear visuals designed with the portable screen in mind, new and remixed maps, remastered weapons, an updated UI, full support for single Joy-Con™, dual Joy-Con™, and Nintendo Switch Pro Controller inputs, and an entirely new soundtrack introducing a fresh and mischievous medley of energetic tracks to enjoy.

Wield a wacky arsenal of one-hit kill weapons ranging from blunderbusses and hobby horses to candelabras and explosive teddy bears. Since all characters are invisible, players must watch their opponents’ screens to know their locations; screen-cheating is not only encouraged, it’s necessary. The 11 levels are divided into color-coded areas filled with memorable landmarks, allowing positions to be pinpointed with ease.

Screencheat: Unplugged touts a range of recognizable game modes, like My First Deathmatch and Hillcampers, as well as decidedly less-familiar ones, such as Murder Mystery and the confetti-filled piñata-based experience Capture the Fun, which use the game’s distinctive premise in fascinating ways. This variety is reflective of the full experience, which is brimming with customization options allowing players to tune the experience to their personal tastes.

“Screencheat is a special party game that puts an inventive spin on a familiar experience,” said Nicholas McDonnell, managing director, Samurai Punk. “Our team are huge fans of the Switch, and its multiplayer focus in particular, so creating this new version of the game made perfect sense.”

Screencheat: Unplugged will retail for $12.99 / €11.99 / £10.79 / A$17.99 via the Nintendo eShop, where it is now available for pre-order with a limited-time 25% discount. The game will feature English, French, Russian, Spanish, Brazilian Portuguese, Dutch, and Korean language options with Simplified Chinese and Japanese being added in an upcoming patch.