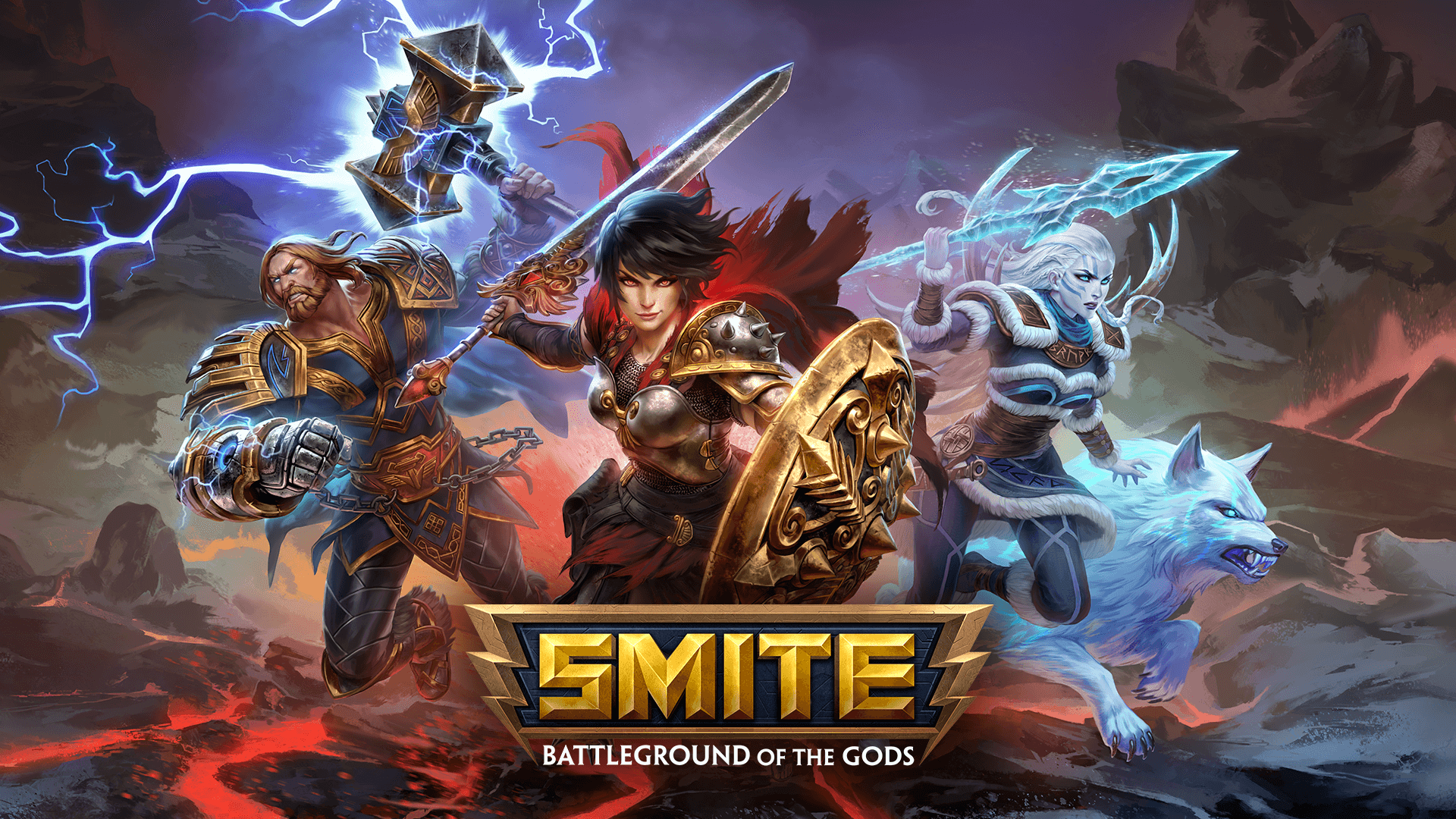 Hot on the heels of dataminers and Nintendo outing SMITE for Switch this week, now it’s Hi-Rez’s turn to make it official as part of their line-up of reveals from the annual Hi-Rez Expo all three segments regarding SMITE, Paladins and Realm Royale can be seen here, followed by the official announcements:

Titan Forge Games announced SMITE is coming to Nintendo Switch during their keynote at Dreamhack Atlanta. The team also presented the studio’s exciting plans for SMITE in the coming year, including the introduction of new characters King Arthur, Merlin, Egyptian Gods Horus and Set, and the inclusion of the World Serpent, Jormungandr. Along with a new platform and characters, Titan Forge is working towards cross-play and cross progression.
SMITE Releases on Nintendo Switch: SMITE will be coming to the Nintendo Switch– making SMITE the only multiplayer battle arena on four platforms. Closed beta begins on January 24th, 2019. Players can gain access to the closed beta by purchasing the SMITE Founder’s Pack in the Nintendo eShop. Contents include the Ultimate God Pack (which includes all current and future playable characters,) 400 Gems to purchase skins, Dashing Deceiver Loki, and Dragon Empress Scylla, which is only available for a limited time in the Founder’s Pack. Players can pre-purchase the Founder’s Pack on November 16th. “The Titan Forge team is excited to bring SMITE on Switch,” said Richard Yu, Brand Director.

“We rallied together to ensure that the game runs and feels as good on the Switch as our other platforms, whether you’re playing docked or undocked on the couch. We can’t wait to introduce SMITE to a new generation and provide veterans a new way to play the game we love.”
Cross-play, cross progression introduced in SMITE: In 2019, Titan Forge continues to improve and add quality of life features to the SMITE experience across all platforms. SMITE fans and developers are excited about the biggest feature: cross platform play and progression. Yu said, “We’re not just developers; we’re also gamers. So we love the idea of cross-play and cross-progression.” Soon SMITE players will be able to access all of their content and progress across platforms and be able to play with their friends on PC, Xbox One, and Nintendo Switch.

“Reaching God 100 is a key accomplishment for SMITE,” said lead game designer, AJ Walker. “We wanted something that was different but would fit within SMITE’s rules of mythology and legendary characters. That’s where we landed on King Arthur and Merlin the Wizard.

For Arthur, we’re going for a new style of melee combos and fluid action animation for Arthur, something that we have never done before in SMITE. To represent Merlin’s mastery of all things magic, he is a Mage that can change between 3 different stances, mastering 3 different magical elements.

We’re excited for players to get their hands on King Arthur and Merlin. Next year, our evergrowing roster of iconic and unique characters will have more additions and surprises!”

Enter the All-New Arena: SMITE’s most popular mode, Arena, now takes place in a brand new map. The conflict between Hera, the Queen of Gods, and Bellona, The Goddess of War, comes to life in the new Arena. Redesigned from the ground up, this new map presents an updated art style, improves gameplay clarity, and introduces a new foe, the Minotaur.

This tanky behemoth will lead the attack on the opposing base The new Arena map went live during the keynote for players to experience at home.
Publisher Weekend & Black Friday Sale: To celebrate the launch of the new Arena map, SMITE is offering a free Arena Bundle to players on all platforms for a limited time. The Arena Bundle unlocks seven iconic Gods and a divine set of skins.

Players can also get the Ultimate God Pack for a discount, and save on gems to purchase skins during the Black Friday sale on all platforms.

Cross-platform play and progression will be coming to the hit hero shooter Paladins, developer Evil Mojo Games announced at the annual Hi-Rez Expo on Friday.

“We want to break down the barriers that stop friends from playing together on PC, Xbox One, and Nintendo Switch,” said Chris Larson, Hi-Rez Studios General Manager. “And we are technically ready to support cross-play on other platforms as the opportunity arises.”

The new initiative will allow players to access all of their content and progress across platforms. Players will also be able to play with and against their friends, regardless of input method, if they so choose.

Cross-platform play and progression will be a major feature of Paladins’ upcoming Season 2, which is focused on content, quality, and community:

Imani, the Last Warder, is Paladins’ most ambitious champion yet

Evil Mojo Games announced Paladins’ 40th Champion Imani, a dragon-summoning mage, as an example of their new commitment to content and storytelling.

“Imani embodies, as a character, what Paladins is as a game,” said Garrett Martini, Evil Mojo Games Lead Designer. “She combines the shooting elements of modern games with the magic of Paladins’ fantasy world. And she summons a massive dragon, which is just cool.”

Imani, the Last Warder, is Paladins’ most ambitious champion yet. This Damage champion wields the elements of fire and ice, casting powerful spells with impactful, martial arts-inspired motions. She surfs through the air on ice, propelling herself with fire. And when she uses her ultimate ability, Imani summons a massive player-controlled dragon, breathing frostfire down upon her foes.

Imani’s release concludes an ongoing story arc, “Dragon’s Call,” which stretches back to early August. And her appearance kicks off this season’s storyline. Each month, Paladins will release a new major update, the story will progress, and the Realm will evolve — Just like a new issue of your favorite comic book.

Paladins players will play a role in the game’s evolution during Season 2, thanks to the new Assembly of Champions. This democratically-elected player council will assist Evil Mojo in the continuous development of Paladins by representing the community’s interests across multiple platforms and demographics. Elected delegates will sit for one year and represent the community in regular scheduled meetings with each other and with Paladins developers. Applications are available now; visit [URL] for details.

Lastly, Paladins will focus on improving quality throughout Season 2 with The Hunt: a new initiative focused on process improvements and polish. Patch 2.01 will enter public test servers on December 17, giving the Paladins team more time than ever to hunt out and squash bugs. Evil Mojo is also expanding their programming and QA teams, and devoting 20-40% of each development cycle to polish.

To welcome new players to Paladins and share Season 2 with them, Paladins is offering a free Starter Pack to players on Steam and PC for a limited time. The Starter Pack unlocks Paladins’ four newest Champions free, along with a skin and voice pack for each champion. The Paladins Starter Pack DLC is available free on Steam, or will be unlocked automatically for all players on PC who log in between Nov. 16 and Dec. 15.

Realm Royale burst onto the scene when it entered Early Access Alpha earlier this year, and it’s easy to see why. The unique, class-based Battle Royale gameplay makes every encounter feel fresh and unique. Even in an Alpha state, the game captured audiences and drew the attention of major streamers and content creators. Hi-Rez Studios was amazed by the early response from players as over 4 million unique players joined in the first few weeks of Early Access on Steam. Now, the game is ready to expand its reach to new platforms while at the same time bringing new and interesting game elements to Realm Royale.

“At first, we struggled to find the soul of Realm Royale. But with the community’s undying dedication to this amazing game we have made a lot of progress over the last couple months,” said Rory Newbrough, Creative Director of Heroic Leap Games, the game development studio that makes Realm Royale.

Console Closed Beta: After several months of testing and customizing the game for the console experience, Heroic Leap is proud to announce that Realm Royale is now in Closed Beta on Xbox One. The studio quietly started ramping up access key distribution last week.

“ To be honest, when we entered Alpha with Realm Royale we were caught completely off guard by the reception the game had in such an early state. While the game had a fun foundation, it still had a long way to go in order to provide a lasting experience for our players. The game was not yet ready for the next step. Now, we are entering Closed Beta and we can’t wait to hear your thoughts,” Newbrough said.

The studio plans to expand the Closed Beta to PlayStation 4 very soon.

The Future of Realm Royale: Heroic Leap has new surprises for fans as they continue to expand the world of Realm Royale. PvE monster fights and in-world objectives are all possible expansions for 2019. The first such in-world creatures will be released during HRX weekend! [when.] Introducing the Loot Goblin – a treasure-hoarding goblin that hides within the map. When players come near the goblin it will spring up in surprise and attempt to escape. Taking down the goblin rewards players with all its treasures.

“With the introduction of world creatures like the Loot Goblin comes limitless potential for this massive world, and we can’t wait to talk more about it,” Newbrough said.

Realm Royale is honored to participate in the Steam Publisher weekend for the first time. Players will receive a free bundle just by logging into Realm Royale on Steam for a limited time.

Should after all this, you still want to see the entire key note presentation, you can do so right here: