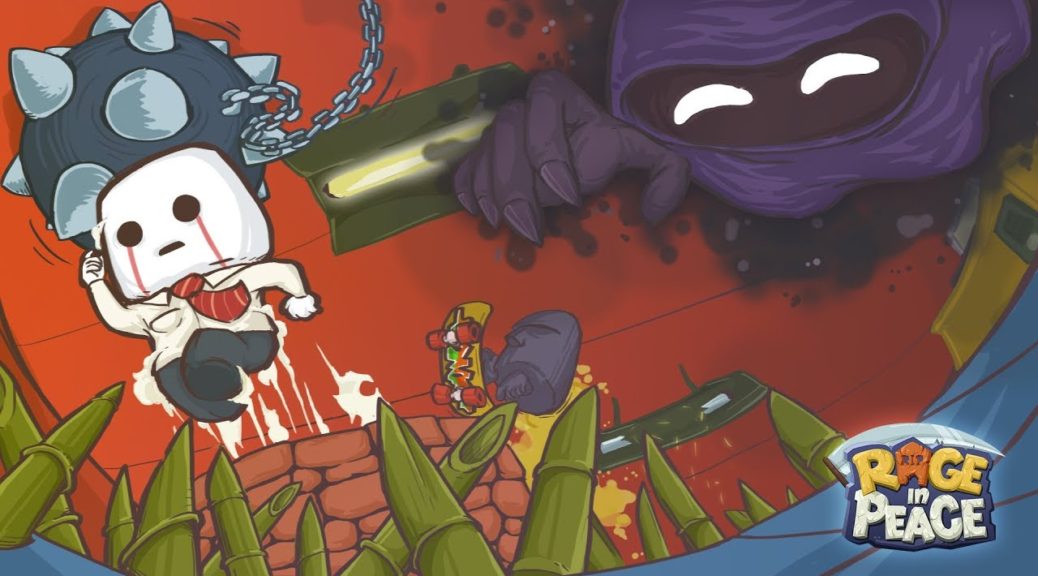 Not quite 100 ways to die on the way home from work.

If you have ever wondered what would happen if Seth MacFarlane’s “A Million Ways to Die in the West” was adapted to be a video game that just so happened to be developed by Edmund McMillen of “The Binding of Isaac” fame, not only does such a thing exist by the name of Rage in Peace, but on November 8, 2018, you will actually have the chance to get it on Steam and the Nintendo Switch.

Although it’s not actually developed by Edmund McMillen, Rage in Peace is one gory side-scrolling platformer that is just bursting at the seams with blood and carnage. As for who actually is behind it, that would be developer Rolling Glory Jam and publisher Toge Productions.

In terms of story, Rage in Peace is a game in which tells the story of Timmy Malinu. At 27 years old, he is a rather sod in the sense that he is essentially emotionally dead inside and his dream, is to die at home, in bed and in his pyjamas.

By no means is it a weird dream, since I’m sure a few of us, if not everyone who has ever lived and/or is still living, have often hoped we would go quietly into the night, with no fuss, no drama and no sudden tearful farewells, as it is a perfectly natural desire. Just because we would like it to happen though, it doesn’t mean it will and Timmy is actually going to have to find that out the hard way. (Sorry Timmy.)

You see, in Rage in Peace, the day for Timmy to die has arrived and there are so many gruesome ways for him to meet his end that he has literally got cheat death, just to get home and die in the fashion he so desires. Naturally, I’m not one for hurrying someone to the afterlife, especially when tortured souls like Timmy interest me, but after 10 minutes of playing Rage in Peace, I soon become more interested in seeing the many different ways that Timmy could die. (Spoilers! There are 87 different ways and Puddle Shark is one of my Top 3.)

During Timmy’s journey, he will make friends, battle bosses, acquire cool double jumping powers and frequently encounter a cute little Grim Reaper, who can be can rather chatty at times. Now, being a new release, you’re really not going to get anything more out of me with regards to the story and its progression. What I will talk about instead though, is the gameplay and the content.

Although Rage in Peace does not have worlds in the common sense, it does have Acts instead of worlds and there are 5 of them and instead of your typical levels, each act has a number of areas for you to playthrough. Now, as simple as walking from one side to the other is, Timmy’s journey through his office, a temple and more, will not be an uneventful affair as death is at every corner, nook and cranny.

One minute you can be running along a long hallway and all is fine, but the next minute, you will need to avoid Stone Ngehe’s that are riding around on a skateboard, jump over vengeful spirits that will burst out of your computer and of course, leap over typical spikes that have been the downfall of many a gamer who has played a platformer.

While not every death is imaginative, they are very gory and it really doesn’t take long for your death counter to rack up and you lay eyes upon so many death certificates that you’re going to need another cabinet, just to file them all in.

When, not if you die, but when, you will be returned to the beginning of the area you’re in unless you have reached a checkpoint. If you have reached one, you can resume from there, but with so many ways to die, although you’ll only need to remember A for jumping and the left analog stick for movement, when it comes to the controls, you will also find yourself having to memorise the location of every contraption that killed you, should you wish to advance.

On the off-chance that you do know what you’re doing and surviving is no issue, you will then have to consider the mementos. With 23 of them scattered all throughout the game, to collect them, you will need to leap into them and survive long enough for them to be added to your collection.

Talking of the collection, if you ever wish to check out your stats, simply visit Timmy’s Journal, as that keeps track of a whole range of things, such as memos, the ways in which you’ve died, the mementos you’ve collected, how many of the game’s 51 achievements you’ve earned and of course, your stats.

When not actively playing in a level, but you’ve booted the game up to play again, or quit, or are just moving to another Act, players are then afforded the chance to look over the areas they have previously conquered and seen just how long it took them to whizz through it and see if they missed any mementos.

Should everything prove too easy for you though and you happen to collect every memento with some out-standing achievements to earn, there is still more gameplay that awaits you thanks to Special Run. Provided you can beat the game, you’ll unlock Pilgrimage in which tasks you with attempting to beat the game, without dying. (Don’t worry, if you can succeed here, you can earn a couple of achievements.)

As for the other mode Special Run has to offer, it is Speed Runs through Acts you have already beaten. Personally speaking, this particular feature is a little out of place, since there are no online leaderboards supported.

In the event you find Rage in Peace a little too hard though, you can always opt to enable Goldfish Mode, to help ease you into the game, but it does not offer the best gameplay experience.

Strictly speaking, Rage in Peace is a sound game that works rather great, but the biggest issue many may face with it, is its difficulty since Rage in Peace might put off more players than it encourages to keep playing it.

If you can get past that though, you will discover a game that uses HD Rumble rather well, when warning you of impending threats, or signifying the face you died. It has a pretty great soundtrack, consisting of 19 songs, which you will want to listen to.

Cards on the table, despite its hardships, Rage in Peace is one of the most gorgeous, yet gory platformers I have played. It can be fun, it can also be frustratingly insane, but it is all part of what makes the game so alluring! Sure, it’s not a platformer for the faint of heart, but it is a great one nonetheless and a worthy addition to the Nintendo Switch eShop.

One thought on “[Review] Rage in Peace (Nintendo Switch)”