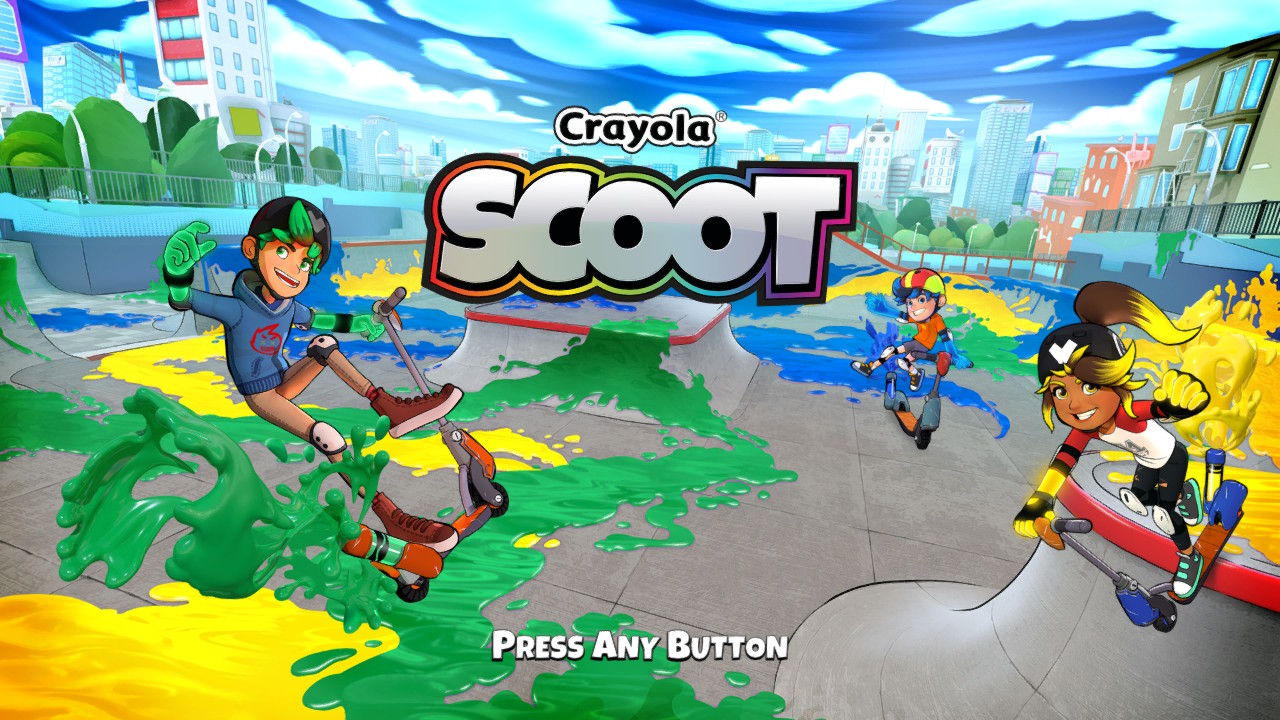 The ultimate combination of Splatoon and Skate gives us…Crayola Scoot?

From the time you are young to the time you are older, Crayola is a part of everyone’s life at one point or another. The crayons and markers they produce are unmatched, but what if more could be pulled from them?

Enter Crayola Scoot, a brand new IP centered around the world of Crayola mixed with the physics behind skateboarding. With Skate 4 seeming like an unlikely release anytime soon, Crayola has you covered.

Each scooter is built with the ability to release ink from the wheels, which gave me instant flashbacks to Splatoon, a game centered around the point and spray of ink towards other players. The mechanics are easy to understand and tricks are quick to learn, but is there enough color for this game to stick around? Let’s find out.

Rather than paint an already existing formula with a new batch of paint, Outright Games made it their goal to build on a dying genre and bring something fresh to the table. Do not expect to open the game for the first time and breeze through hundreds of levels built around a living and breathing world.

This is everything you come to expect from a Crayola game, which isn’t very much, to say the least. Controlling your mighty vessel is rather easy, as with the push of a button your scooter will blast off with a quick enough pace, leaving the color splatting to you. How exactly does this work? It’s simple really.

Pulling off tricks and stunts pays off, as each stunt will cause paint to spray the ground from the inside of the scooter. The higher the risk, the higher the reward. The longer the tricks are while airborne, the more paint that is sprayed across the field. Besides pulling off high profile tricks, players also have the ability to boost, which comes in handy towards the final seconds when you are down by a small ounce of paint.

Not only does the boosting mechanic make it easier to move around environments, but it also leaves a trail of paint behind the player when boosting. Boosting becomes useful when looking to pull off longer stunts and to secure more airtime. Winning matches against opponents is quite a breeze, as the main objective (much like Splatoon) is to have the most paint covered throughout the field while the clock is running. Unlike Splatoon however, the choice is up to the player on which color paint they would like to use during each level.

This is accessible throughout the options menu and is brought to life at the beginning of the game. The game is full of different ways of playing, most notably of all is the main story. In this mode, the objective is quite simple: you want to become the best scooter in the park. Seems easy enough, but there is quite the ranking ahead of you that have been training all their life to maintain their position on the leaderboard.

Climbing the leaderboard isn’t a difficult task, as all that needs to be done, is increase the reputation level of the playable character. By becoming the very best, players will find themselves winning the Color Cup, which is the main objective of the game.

The story is nothing fancy, as it should be, but it is cleverly set up in a way that makes it accessible for all players, whether experienced or are newcomers to the genre. All players need to do to progress up the ranks is to win battles against other players.

Other events are scattered throughout the story mode, but these do not need to be won in order to progress. Players will earn stars after each event, which can be ignored completely or can be replayed in order to receive three stars.

Besides the main story mode is a mode known as Color Frenzy, which has players face off in team-based matches or in all-out free-for-all warfare. This mode seems heavily similar to Splatoon’s Turf War, which has the same effect. Using scooters, players battle against other players in teams in order to cover the most ground in the allotted time slot.

Besides team play, players can battle it out in free-for-all games with the same objective. Painting the battlefield doesn’t take much skill and effort, as boosting, pulling off tricks and stunts, grinding rails, and hitting flips while airborne such as 360° spins causes paint to splash down on the ground.

Yet another mode is Trick Run, which like the name suggests, is all about gaining the most points from tricks before the time runs out. The key to this mode is pulling off as many tricks as possible in one-go and ranking up combos as opposed to grinding the rails, hitting a quick spin, and repeating the process all over again.

This mode is best played as a way to learn new tricks and stunts, but it feels bare, with paint not playing any effect into the actual gameplay of this mode. With the game being built around the idea of painting and maneuvering a scooter, this mode felt like nothing more than a nostalgic callback.

Crazy Crayons is another example of one of the many modes that the game has to offer. This mode, in particular, provides a nice change of pace compared to the rest of the modes, as this one mimics the ideas and mechanics behind Capture the Flag.

Only this time the player is playing a game of Capture the Crayon, with the main objective being to capture and hold the five crayon beacons scattered around the map. Although it does seem to stray away from the other modes that the game has to offer, it does very little to distinguish itself as a mode worthy of returning to.

Splat Tag is the final mode in the game, which centers itself on the game of tag. The player can either avoid being sprayed by paint or be the one to paint all of the players. There are two different versions of the mode, those being chase and survive, with neither packing enough content to bring players back in.

Packaged in with the rest of the game is a challenge mode known as S.C.O.O.T, which takes two players and has them take turns in order to see who can achieve the highest score from combos. If the player defeats their opponent in each round, the opponent will gain letters and spell out “SCOOT” marking the end of the game.

The goal is to score enough points as to not gain any letters, which is simple as the opposing player doesn’t do much in terms of pulling off combinations and soaring through the air. To top it all off, we have cruise mode, which is a free-play mode where the player has control over a whole park and can do as they please.

Crayola Scoot seems to hit rock bottom as players find their way through the game’s modes. With lack of instruction and amount of fun to be had, there was virtually no reason for players to jump back into modes after a few plays. Although there is split-screen play where friends can jump in, the game seems to be lacking in polish and depth to the point where it was a drag to climb the ranks and finish the Color Cup.

The aesthetic of the game appears to be its highest point as it strokes on the keys of the past, but there isn’t much enjoyment to be had through the numerous modes and events scattered throughout the game. As an introduction to children to this genre it may fit in, but there just wasn’t enough to pull me back in. For the $40 price tag on the eShop, there are much better alternatives and titles to pick up beside Crayola Scoot. Final Score: 7/10