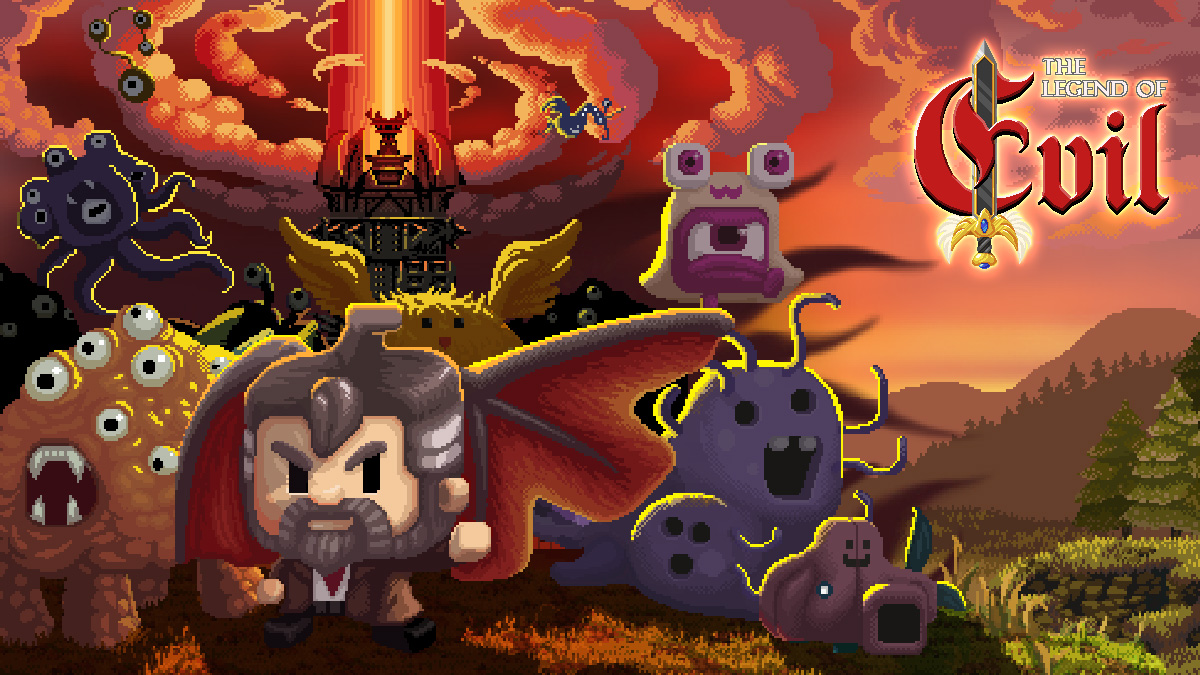 “Brace yourself, the humans are coming. They brought weapons, too!”

Before starting this review, it’s time to be honest. I am bad at strategy games. I am more the grinding kind of person in an RPG, more a fan of action and brute force than cleverly thinking how to strike against my next opponent. I do not like to give away the control to others, I prefer to be a leader. I know what is going around in your head now: “That is controversial!” And you are right about that!

It seems strange that I took The Legend of Evil and gave it a chance, but the mix this game provides and developer Springloaded promises, is too enchanting. Available on both Nintendo Switch and Steam, the team behind the game promised to pour love into the game long after release, so look out for both humans… and updates!

Being the bad guy and leader of demons, you start off as Bill. All you need to know is that you are a sort of demon king, leading various types of monsters to victory against the people of the Earth.

Normally, you start off with a hero fighting the evildoers, but The Legend of Evil actually turns it all around. Not the most original of plots. Although it is forgivable because the story is secondary in this title anyway and it is still fun to fight your way through on the “dark side”.

How to conquer the world and pave your path with destruction in the Campaign Mode?! That isn’t too difficult in theory. Bill and his crew defend their own red glowing obelisk while destroying the precious one owned by humans on the other side.

In this side-scrolling title, you only control the tough leader himself. As you might expect from a mastermind, he won’t get his hands dirty and operates in the way of commanding his demons only. Like a real leader or head of a big company!

Summoning your army in The Legend of Evil is made simple. Various glowing points on the ground symbolize where you can put your shrines. Lucky for you as you go, all of the towers are able to be upgraded, too.

Red points on the level symbolize the ones where you can place towers that spawn a type of demon. Colourful not only in appearance, but these helpers also have different attributes that require you to choose wisely. Some of them are able to fly or throw projectiles while some of those demons are even able to explode when their health runs out. (Very helpful to erase a larger group of these annoying humans at once!) More types are unlocked as you progress further in the game, but only while beating up good guys in Normal mode.

Then you have purple points as well. There you can only build strategic shrines. Not able to create new soldiers, these only assist you with helpful attributes that slow down your enemies or even spawn souls (or monster) faster.

Wait a minute, did I say spawn souls faster? Yes, you heard that right. Human souls act as a sort of currency in this title. A certain amount is required to build your defences up. You need them to spawn monster shrines as well as strategic towers. Last but not least, they are also needed to upgrade each tower and equip it with useful additions to keep those humans at a distance.

Where you want to start and where to stop lies in the palm of your hands. Since The Legend of Evil is rather strict, you do not gain as much (strategic) freedom as I would have wished for. More on that topic later, though.

This cute little game offers you so much more than “just destroying the humankind”. Besides the Campaign Mode, you are also offered with the Rogue Conquest Mode. There you will experience eight randomly generated levels and fight your way through them. The main goal there and the key to success is the coins you earn along the way. Using them on upgrades and other kinds of demons to strengthen your army is essential.

When first starting this mode, you were able to customize your own character. That was rather cool, even though it was limited. You can generate different types, but not build your own one. (So far, so good.)

I was proceeding rather quickly with beginners luck. Facing crushing defeat on level 4, I was left puzzled. I tried again, with a new monster type but with no better chances. Purely based on randomness and therefore perfectly matching my behaviour sometimes, this game makes it hard to plan ahead here or even have much of a hand in the stages itself.

Your actions are limited in the stage itself and you are pretty much screwed if you picked the wrong type of upgrade or demon by mistake or not paying too much of attention. For example, you can end up in a dead end if you do not have the right terrain genre equipped for that level.

Your demon simply gets “useless” in snow when not getting some protection against the snowy landscape they are manoeuvring through. I would have preferred to it getting harder instead of wanting to punch yourself in the face for making that stupid mistake.

Once lost you will be set back to square one and start again from stage one in Rogue Mode. Even though the developer state that Rogue Mode is a bit more casual and easier to pick up, I actually thought it was the other way around.

I enjoyed the Campaign Mode more. I screwed up there countless times as well, but I am just a human being. It is my humble opinion and probably another reason Bill and his henchmen wants to destroy our kind. It really depends on the personal style of the player enjoying The Legend of Evil.

Spending time in Rogue Mode is not the only thing you can do. In Campaign Mode, you actually can kill your opponents, but you also can pick up medals along your path of destruction. Although, you are only able to get medals in the Normal difficulty setting. Once entering Easy mode, the opportunity to be rewarded to finish the level on a certain time or other requirements vanishes into thin air.

With that requirement, the team also “forces” you to beat the stage at least once on Normal Mode, so you unlock types of defences or monster after all. After some time into The Legend of Evil, I looked at “Easy” as rather being a Practise Mode. If you end up playing in Easy Mode because you suck at the game as I did, you will not gain any necessary monster types or defences that are a must in later stages.

So you essentially have to beat the Normal Mode to finish the game. Thanks to that, everything can unlock randomly and you might skip a useful upgrade along with your playthrough. No worries, though. They will not be lost for good, you can always go back and try to obtain them afterwards.

Let’s take a closer look at the visuals of The Legend of Evil. Provided with the cutest graphics, every fan of the pixel era will love this. Including me, I am biased here. I love retro games and so the charm of visuals from the “older times” struck me from minute one.

Springloaded made a great effort in pouring his love into the graphics as well. Detailed enemies and “playable” character, as well as landscapes, are bursting with elements, thus compelling you to stop and admire the background. Too bad you often won’t get time for that regarding the aspect of “game visual sightseeing”.

Keep your eyes open nonetheless, because you can fill your “Humanpedia” when a new obstacle or kind of enemy appears. By pressing X nearby the new discovery, you will gather information and a new entry into the book. Can you catch them all?

Perfectly fitting to the graphics are the tunes and the sound effects. The chiptune soundtrack of The Legend of Evil is has a decent variety. Although I wished there would be a bit variety because let’s face it, you will countlessly replay a stage over and over and the song can get repetitive. The ones that are included, did make my 8-bit heart melt.

A cool feature is actually the possibility to listen to all of the tracks at the “Others” option on the title screen and “carry them over” until you start the game. Additional notes from the developer on each track make a nice feature as well as the previously mentioned “Humanpedia”.

The only con I had with The Legend of Evil, is the difficulty within the genre mix. Stubborn people like me might have the strength to see the demons succeed after all, but this is not a title if you are not open to the kind of game The Legend of Evil is. Springloaded actually mixed a lot of genres into that title. Mainly it is a tower defence game with hints of strategy and puzzle elements. The game needs you to solve the right kind of strategy to reach the end of the stage, otherwise, you see human prevail more than you’d actually like.

Being what it is, some people might not get what they expect. I was surprised at first as well and faced frustration more than once… But like any other puzzle game, you might want to step back and try again later with a fresh mind. When that will lead you to victory against the humankind, you will be more than motivated to proceed further.

Just as an example, I took about 30 to 40 attempts to clear stage 9. In Easy Mode. I stepped away from the game, cursing at it that would even make Bills head turn… Just to return and beat it on my first attempt after a break, on Normal Mode!

“Kill Bill!” would the mass scream in rage. Looking in the mirror, I am still a human being and I often than once wanted to join that crowd. The Legend of Evil is a hard game and not everyone’s cup of humans tears (or whatever demons actually drink), but if you are willing to give it the time it deserves, you might just find it is a game for you. Personally, I will definitely picking it back up after finishing this review..