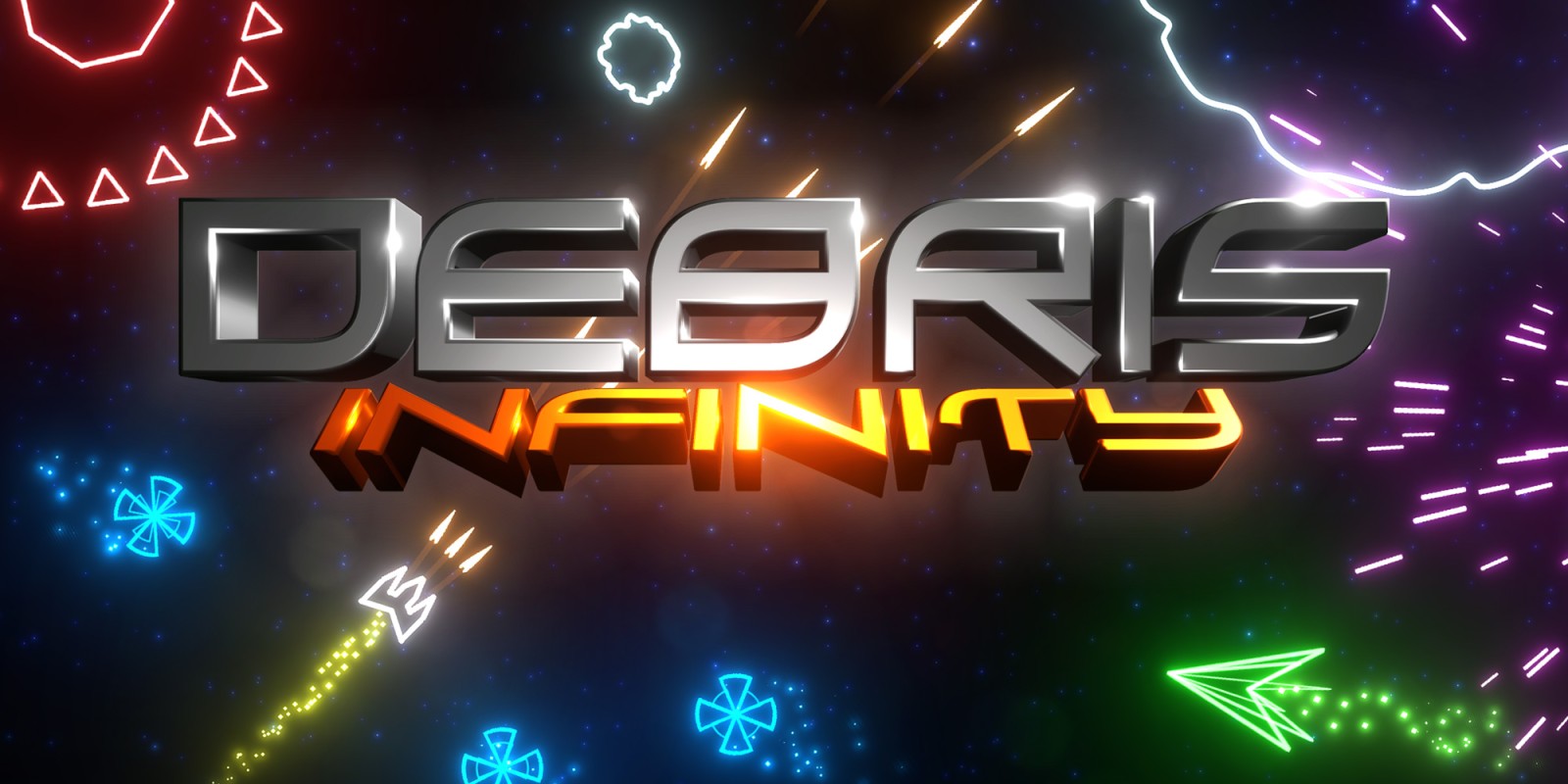 October 15, 2018 7:06 am Published by minusthebrant Leave your thoughts

We need an arcade shooter on the Nintendo Switch just like Geometry Wars, and developer SVC Games thought of this too with their take on the vector-based graphics shooter with Debris Infinity. For a budget price, you get a fun little shooter that, while not on the same level as Geometry Wars, is competent and does a great job of setting itself apart. This is a fairly new twin-stick shooter that came out last year on PC, but now is available on the Nintendo Switch.

Featuring the classic formula of single-screen shooters, Debris Infinity is controlled by using the left joystick to move while using the right stick to fire in all directions. This is how most twin-stick shooters control and it works very well with fluid movements and adequate quickness. Debris Infinity stands out from other shooters on the market though by incorporating a slow-motion move and also a screen-clearing bomb attack, common in most shooters of this sort. These abilities give Debris Infinity a level of strategy that always makes for unique matches.

Instead of always shooting at enemies, the most interesting thins with Debris Infinity is how much in common it has with an originator of classic shooters: Asteroids. On top of trying to outmaneuver and destroy enemy ships, you’ll also have to dodge incoming asteroids and destroy them. They’ll break down into smaller pieces, much like classic Asteroids, and will continue to reduce into multiple fragments until they’re completely destroyed. This adds to the chaos onscreen due to more floating debris in the field of play, and you’ll have to stay focused.

To make your way up the leaderboards, you’ll need to master the unique combo system Debris Infinity features. This multiplier increases by destroying enemies in a consecutive order before a short amount of time is up. There are two combo bars you must keep track of with the one on the right being Streaks and Combos on the left. Streaks are used to keep the multiplier at a high level in order to increase the number of points you attain by combos. For combos, you have to continue to destroy enemies before it completely depletes. The higher your combo, the more points you’ll earn from defeated enemies. You can also receive additional points by how fast you destroy enemies and this is called a Reflex Bonus.

There are three modes you can choose: Normal, Time Attack, and Power Wave. Normal mode involves surviving wave after wave of continuous enemy barrages while earning as many points as you can. Power Wave is the most unique mode and one I had the most fun with. In this mode, you still defeat waves of enemies, but there is a theme name given before each wave. This gives you a clue to what type of enemies or attack patterns will come your way. For example, one wave titled “Cornered” had enemies spawning from all different corners, while “Fatal Attraction” had these kamikaze-like enemies shooting my way continuously.

To stay alive is a worthy challenge unto itself whether you’re playing any of these modes, but that isn’t always enough. If you wish to compete on the online leaderboards, you’ll need to play smartly, be aggressive, and know when to take risks. Trying to avoid taking hits is key to filling up your combo multipliers and the real challenge is trying to maintain a high score while not sacrificing your survival in the process.

The graphics are bright and neon-infused colors pop with the space theme. Particle effects and explosions look beautiful and are all done exceptionally well. While the enemies are generic in design, most have unique attack patterns that change-up the gameplay. Musically, like many futuristic shooters of this type, there is a thumping electronica soundtrack that fits right in with the action onscreen. I would, however, recommend turning off the HD rumble portion though, as it is jarring how powerful it is and can’t be adjusted.

Overall, Debris Infinity is a solid budget priced twin-stick shooter that doesn’t feel cheap. This is a Geometry Wars-lite title that features simplistic, but fun controls and enough modes to make leaderboard chasing enjoyable. There’s not much to Debris Infinity, but there doesn’t have to be with how simple and fun it is to just play a few quick rounds each day.