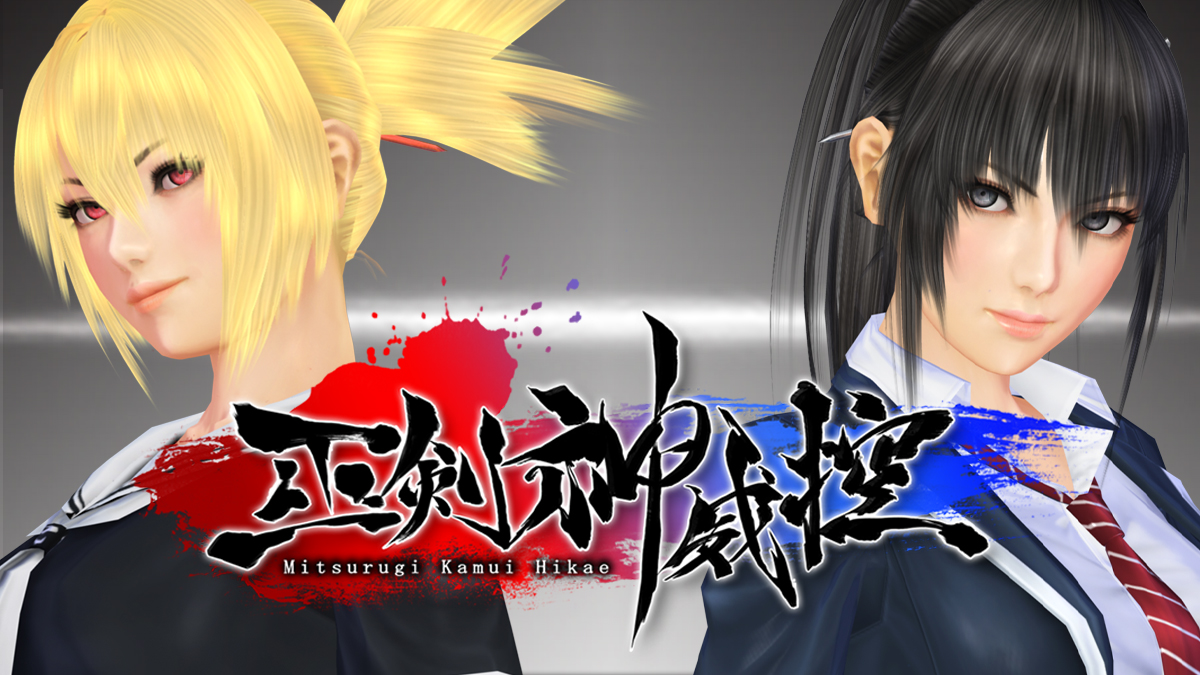 Swords, schoolgirls and lots of slashing!

Given the heavy hitters we’ve had release recently (Xenoblade Chronicles 2: Torna – The Golden Country, Final Fantasy XV: Pocket Edition HD and etc.,) it’s reasonable that some games may have gone unnoticed when they released and one such game is Mitsurugi Kamui Hikae.

If you like to label yourself as a lover of the hack and slash genre, or even just a fan of Devil May Cry and Bayonetta, Mitsurugi Kamui Hikae is definitely a game that is right up your alley. It might not be anywhere near as large as those titles and severely lacking in a sizable budget, but what developer Zenith Blue has done with Mitsurugi Kamui Hikae, is still pretty impressive none the less.

But what is Mitsurugi Kamui Hikae.and what is it about? Well, picture the likes of Bayonetta, but picture it as being an arcade game, with the levels being stages and each stage solely consisting of a single location. Then get rid of Bayonetta, but replace her with a Japanese schoolgirl, in uniform, wielding a pretty big sword.

That girl is Misa and Misa is a Blade Templar. It is the duty of Blade Templars to protect the world from Demons and “use ancient techniques” in the process. Misa is on a mission to seek out an artifact known as the Demon Blade, a lethal implement that drains the life force of those who use it and unfortunately, Misa’s friend Suzuka, just so happens to possess it.

After a brief narration that explains all this, players are then free to engage in the game’s only mode and play the 5 stages in which will see Misa having to fight waves of Demons before eventually having a showdown with Suzuka.

Depending on what difficulty you choose to play the game on, Mitsurugi Kamui Hikae can become longer, due to harder Demons taking longer to defeat but essentially Stages 1-4 all consist of 6 waves, with the final wave always being against a boss, whereas the 5th stage is two boss battles, one straight after the other.

Now, although Mitsurugi Kamui Hikae does lack quite a bit in terms of content, due to only having one mode, it does have plenty of replay value thanks to an upgrade system that can’t be maxed out in a single playthrough and unlockable costumes that can be worn. You know what else Mitsurugi Kamui Hikae has? A pretty great combat system that does lead to some engaging combat.

Granted Misa’s move-set is very bland when you start playing, every time she earns SP, she can then use those Skill Points to upgrade her repertoire, even in the middle of a battle. So, provided you have the points to upgrade her health, increase her hand to hand combat skills, pull off a brilliant Comet Kick or even let loose with the Sonic Slash, in no time at all, you can turn this warrior maiden into a force to be reckoned with.

Together you and Miasa, might not be able to hold your own in Hard mode straight away as a serious amount of upgrading is required for that, but you will be able to take down most enemies with ease in other moves and pull off fanciful moves in the meantime.

Sure,the camera will get in your way at times as it’s not entirely perfect, but the hack and slash nature does have plenty to get excited about. Although, it also has plenty of pantie shots since Misa, unless changed into something else, is wearing a short skirt and really likes to throw her legs around as she kicks.

Still, the above doesn’t actually cover how Misa moves and fights, so let’s address that now. Her sword is the Zangeki and players can use it by pressing/spamming the X button. You can’t do it forever though since this particular attack drains her Katana Gauge and when it’s empty, it’s no more Zangeki for Misa, unless you recharge it.

Recharging is done via administering blows dealt with the Y button (hand-to-hand combat.) Not only does this have her recharge the Katana Gauge, but it also allows Misa to fight when the gauge is empty. Now, should you deal enough strikes to a singular enemy, you will soon see them flash red, which tells you they have entered a Bleeding Status.

Enemies that have entered such state are weaker and will take on a lot more damage, thus helping you to finish them off sooner. As for a reason to keep on hitting everything, other than it giving you a great combo that can only be interrupted by you getting hit, is because the more blows dealt means more blood rings will for around your sword.

This “Bloodspirit” is a great asset since they will allow Misa to recover more health and replenish her Katana Gauge when she uses a Zanshin attack. Zanshin can be executed with the ZR button and on top of making sure Misa is at the top of her game, they can also deal damage to enemies in a Bleeding state.

But what of the B and A buttons? Well, B is used for Jumping and A is used for Holy Attacks. By holding A, Misa will charge her Holy Attack, of which she has two. The first level is the most basic form and first to charge, whereas the second level requires a longer charging time, but is even deadlier. Of course, with the likes of the R button, players can speed up the charge time, but this comes at the cost of depleting your Katana Gauge.

As for sprinting and dodging, while the left analog stick is used for running, players can press in the left stick to dash, or press ZL whilst pushing in any direction, to perform an evasive roll. Naturally, those are the basic controls as the latter available moves include a combination of button presses and directional inputs, but I must admit, Mitsurugi Kamui Hikae does perform brilliantly on Switch.

Whether I was playing in handheld or docked, the framerate seemed to remain consistent and although the enemies don’t look particularly great, Mitsurugi Kamui Hikae does have a pretty fantastic, anime-like art style that suits not just Misa and Suzuka, but they’re surroundings as well.