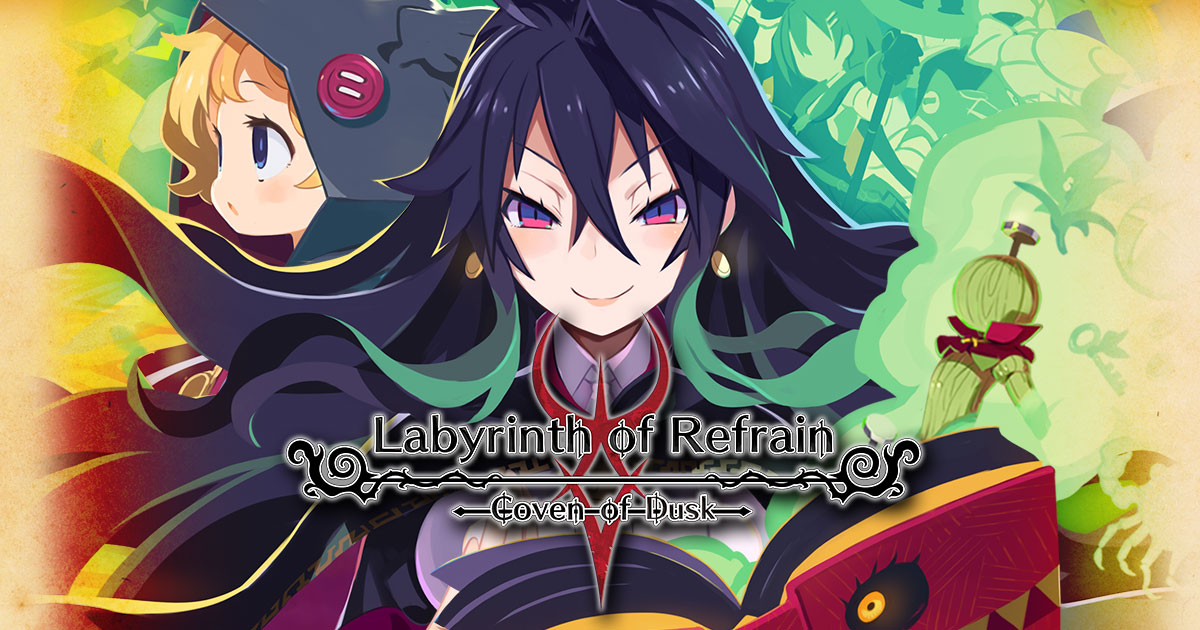 September 14, 2018 7:06 am Published by minusthebrant Leave your thoughts

Labyrinth of Refrain: Coven of Dusk, from developer Nippon Ichi Software and publisher NIS America, is a first-person dungeon crawler that had some influence from people who have worked on Disgaea, including its producer. This is the type of title that you really need to have a love for deep RPG combat exploration and a tolerance for high difficulty to get the most out of. Labyrinth of Refrain takes the defining elements of a genre, in this case, party customization and exploration, and pushes them to the extreme. It was originally released in Japan on the PS Vita in 2016 and PS4 last year and now it’s out on the Switch with a full English voice-over.

Labyrinth of Refrain takes place in the town of Refrain where Madame Dronya has arrived with her assistant Luca to investigate a mysterious well that leads to a sprawling underground labyrinth. Only one explorer has ever returned from the well’s depths and wrote a book which covers her exploration. Dronya and Luca have this book and are using it to investigate the well but they can’t investigate it themselves. The labyrinth is full of a poison miasma that would kill any humans, so Dronya uses her magic to make puppet soldiers that go in and do all the exploring for them.

Your role isn’t as Dronya or the puppets directly, you play the book itself after your fading soul takes refuge within it at the beginning of the game. As the book, you can’t really talk, but there are some dialogue options where you can assert your will positively, negatively, or just stay silent. The overall presentation of Labyrinth of Refrain feels very traditional for the genre and I was honestly expecting more in terms of how events are presented and animations are handled, but it’s true the developers made sure to keep the spirit of the genre.

Visually, each dungeon looks different which should be expected, but within each dungeon, there’s not really much variety. I prefer there to be distinct rooms in a dungeon with areas that stand out or look different, but unfortunately, there was not much differentiation between rooms. Character designs are of the anime style and it really leans into anime tropes. They’re well done for the most part and have some interesting designs. Some of the enemy designs are most interesting and are most likely the highlight of the visual presentation.

Getting into the labyrinth itself, in the dungeon, you move around the group of puppets and give them commands in battle. The introduction isn’t really the best first impression since there is not much in the way of a tutorial, but some of the information it gives is too obscure. There are mechanics that are introduced that you won’t use until much later in the game. Also, Labyrinth of Refrain is very difficult upfront and is not afraid to let you fail as dying isn’t as punishing as it is in other similar games. You lose some items and a fair amount of collected mana, but you can keep a decent amount of what you collected on your journey. Thankfully, you gather some important items early on that allow you to see enemies and avoid traps easier that can make a difference with exploration.

Dungeon layouts end up being complex, and even with the auto-map it’s not too easy to get around. There’s plenty of shortcuts to unlock, obstacles, traps, teleports, and story events depending on the area. Locked chests can be found which you will need keys for and this can unfortunately, be tough to find. The environments are different from one another, but they all still have the same drabness to them, making for repetitive exploration. You always have a current objective to complete while exploring, which includes sometimes finding a specific item or just progressing further into the dungeon.

Your secondary goal in the labyrinth is to collect mana which can be found on walls or just floating around from defeated enemies. Mana can be exchanged at your base to gain extra skills and these can be necessary to help you explore the dungeon and further enhance your party. You can also use it to release sealed items you find or perform alchemy to strengthen disassemble equipment. Each dungeon has a mana density limit, which is basically if you carry more mana than the limit the dungeon reaper will come after you and almost ways kill your entire party.

As far as traversal goes, you move about in the dungeon in basically the same way as any other JRPG styled dungeon crawler. You can also jump over some pits and ledges, although there are still some you can’t jump over and will fall into. The most essential exploration skill you get early on is the wall breaker skill and this lets you break any brownish wall on the map which there are many of them. These hidden paths make for nice shortcuts or finding useful items and equipment. Also, while exploring any dungeon you may find an antechamber which are like warp rooms and they let you easily move around the different dungeons and return to your base.

Before taking part in combat, party customization is probably the most important gameplay mechanic you will need to understand. You’ll spend a lot of time managing your party because of its unique coven brigade system. With this, you create new puppets as you find new soul gems and you can choose from the six starting classes with two more being unlocked later. The classes are specific variations of the standard attacker, defender, and magic user classes that you expect from RPG’s. Each class offers several customization options, including three different character designs, three voice options, different personalities that affect stats, three growth options that affect how their stats grow, three stance options which give stat benefits, the choice of several unique class skills, and more.

You can also unlock new options for many of these characters by finding them in the labyrinth or purchasing them with mana. Puppets start at level one, but are quickly able to raise in level to get closer to your stronger party members. Once you have your puppets created you assign them to a coven and they are basically mini-groups you combine your puppets into. They can have up to three attackers and five supporters in each, and have different skills that the group can use. Some slots have special requirements, like only male or female puppets, but finding these coven packs are a big deal as you need to understand this system in order to have success in the game.

Your brigade is made up of five covens, so you can have a forty character party with fifteen attackers and twenty-five supporters. This is a huge party obviously and it really makes progressing in Labyrinth of Refrain fun. Your party will get bigger and bigger, and you slowly gain more puppets and witch packs that let you build up to the full party size. The attackers all attack separately in combat, which makes for a dizzying display of action when a whole units turn is used for combat skills.

The brigade can also benefit from formations when you set each coven to either advanced guard or rear guard, which are basically the front and back rows. Some classes do better in the front row and others should be moved to the back. Formations give your brigade a stat boost based on arranging your covens in a specific pattern. As you can probably tell, the customization options are oftentimes more important than the combat itself and almost seemed too complex to really find enjoyment from.

Combat itself may seem like a standard affair for this genre, but there are many beneficial effects you get for setting up your party right. You can choose to use skills, attack, or use the fortified coven option which is a great defensive move that can tie into some skills. There is also the option to have the party attack with one button which is great to use for easier battles to speed up the proceedings. Also, random attack chaining bonus called resonance that will increase your attack or spell power, and there are echo bonuses that can result in a powered up skill usage that affects all your characters.

When out of battle, you can repair your puppets when you get back to base, but while you’re still in a dungeon they will be limited. How well you set up your party as you get new puppets can really set you up for success or failure in combat, but like any RPG equipment plays a huge role in how strong your party is. Thankfully, Labyrinth of Refrain includes an optimize button for each character, so you can easily go through and just pick the best equipment for them automatically. Manually having to manage each individual character would have been depressing, so I appreciate the developer streamlining this aspect.

Overall, Labyrinth of Refrain: Coven of Dusk is a hardcore first-person dungeon crawling experience that’s better left for that specific crowd. Fans of the genre will find much to like here with customization and dungeon exploration being the highlights, and many other deep systems to get lost in for hours. However, it is nearly impossible to recommend this to people who aren’t into the genre. Labyrinth of Refrain does have advantages over similar games of the genre on Switch, so if you’re itching for another dungeon crawling experience, this is the one to check out.