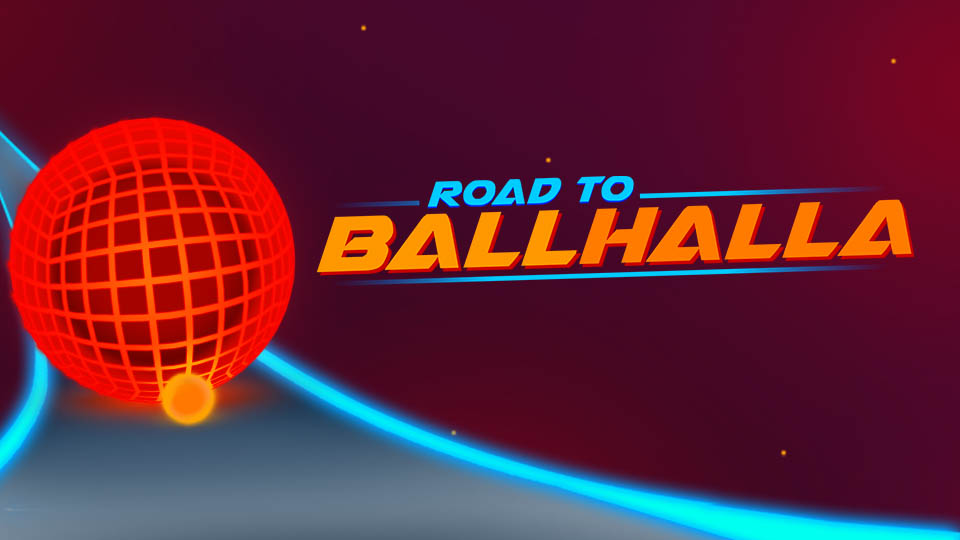 Like with most publishers who have brought a range of titles to the Nintendo Switch, there’s no doubt tinyBuild Games’ games have differed quite a bit and offered quite the experience, but now their latest offering, will either amaze or traumatise all those who play it and personally, it left me feeling a bit of both!

Developed by Torched Hill and stated as being a game consisting of rhythm-driven gameplay, Road to Ballhalla is a game where you need to keep your marbles in check and sink them into a golden hole after completing a series of taxing hazards, all whilst trying to make your way to Ballhalla.

There is no story Road to Ballhalla, but in the game’s campaign, across all of the game’s levels and hub world, there are plenty of text messages across the screen, for players to read and they’re not all hints. Some of them are puns and intentional traps to get you to kill yourself, so as tempting as it would be to put all of your trust into the Torched Hill, sometimes you’re better off not listening to them, but that doesn’t mean you should stop reading, as the text, even the upside down stuff, is always worth going over.

Before we cover how to play, let’s first go over the game’s content. Although “Get Rolling,” is the main campaign, there are other game modes discoverable within it, such as Rush, Hole of Glory, Your Demise and there’s also a Scavenger Hunt that will have players revisit previously completed levels, solving clues to chase a rainbow. In terms of main levels though, there are 20 of them in total, stretched across 4 areas with 5 in each one and for good measure, there are 4 Bonus levels as well.

These levels will require you to navigate hazards, such as lasers, pitfalls, projectiles, giant balls and more, all whilst trying to collect all the yellow orbs on each level and not dying more than 5 times. If you are able to do that, you can earn 8 tokens with 4 for getting all orbs and another 4 for beating the level. If you beat a level with more deaths or less than all orbs, you’ll receive fewer tokens.

Tokens are vital for advancing through Road to Ballhalla as having enough of them will allow you to proceed to new areas, including Ballhalla. Only, just because Ballhalla requires 130 tokens, you will only be able to go there once you have beaten level 4-5 and smite the boss that awaits you there and no, levels can’t be skipped. So, you will have to beat every single main level, should you wish to make your marble reach its intended destination and see the end sequence and credits.

As for another function the tokens serve in, they will allow players to unlock new styles, so in the event you wish to make your marble be a colour other than Carrot Orange, give it a trail and even change the colour of the trail, you can, but just know the better styles require a lot of tokens so you will need to get them all, to be the most stylish marble of them all!

Just in case you take a big fancy to the main world levels and do have no issue beating them in one run and getting all 8 tokens on them, there is a mode that will have you replay them, Rush. With Rush, players will repeat previously beaten levels, except now there are no orbs to collect, just you, the same old hazards and a ticking clock as you race to the end.

Completing the levels in the fastest time possible, can earn you 3 purple stars with 70 and 84 stars, being what you will need to open up Hole of Glory, which is a mode where more challenges await and Your Demise. Just in case the name wasn’t obvious, this particular mode, is one that guarantees dying a lot, as it offers the ultimate challenge for the players really looking to prove themselves.

With regards to controls, there’s not a lot to learn, but precision movement will take some time to master, as not all levels have walls to keep you on the path, so sometimes you will need to stay away from the edge as best you can. To help with this, although the left analog stick can move you, as can the D-pad, which I’d actually advise using as it saved me a couple times.

For when movement isn’t enough, there is always ZR, which can be held down, so as to give you a boost. Just don’t go boosting over highlighted red tiles, as boosting makes you more susceptible to damage and acts as something of an instant death. If you press ZL though, you will be prompted with a message asking you if you want to restart the level all over again. This is good for when you’re trying to go for 5 deaths or less and are currently at 6, but most of the time, you won’t want to use this.

Another button you don’t want to use, but will have to on occasion, is X. Should you roll into the wrong teleporter and find yourself on a separated platform, with nowhere to go, X will allow you to return to the last white orb checkpoint you reached. Your progress beyond it won’t be saved, but when in the really tricky areas, never be afraid to grab some yellow orbs and return to the white orb to save your progress. Just don’t return to it when you have collected blue orbs, as those allow you safe passage across blue tiles and touching a white orb will return them to their pre-set position and you will be required to collect them again.

Other than traps, lasers and switches needing to be activated, the biggest hurdle you can face in Road to Ballhalla are the camera angles. While most levels are basic and give you a fighting chance, there are others that are upside down and at various angles, that it makes steering your ball, become a bigger issue than it should have been and there is even one dastardly level, where you are actually advised to hold your controller upside down, just to reach the goal.

I will not deny this game can have a bit of a steep difficulty curb, but honestly, as much as it did frustrate me, I did really enjoy the puzzles, the need for observation to solve them and can honestly say, I enjoyed Road to Ballhalla more than I thought I would. What really made it enjoyable in my book though, was two things. The first being how it implemented new challenges and the second being the soundtrack.

Composed by the Emmy nominated Nicholas Singer, the soundtrack features compositions styled to the levels and really gives it a pleasant feeling that made it worth dying over and over, as it allowed you to both rack your brains to solve the latest challenge, and have your ears filled with the sounds of an enjoyable soundtrack.

Still, just because I happened to enjoy Road to Ballhalla, it doesn’t mean everyone else will, as like I previously covered, there is a difficulty spike and there will come a point where the game feels completely unfair and that wall, is the part where Road to Ballhalla will either make, or break your will. Do you dare to accept its challenge?

Although Road to Ballhalla starts off easy enough, it is not afraid to get frustratingly hard pretty quickly. I can’t promise you that you’ll become a pro at it, the more you play it, but if you are able to look past the pitfalls and embrace the challenge, you might just find a puzzle-like platformer to your liking. If you can’t do that, then you may as walk away while you still can, because if you think the base game is hard, just wait until you get to the excruciating post-game content, because that’s when you’ll really hate Road to Ballhalla.