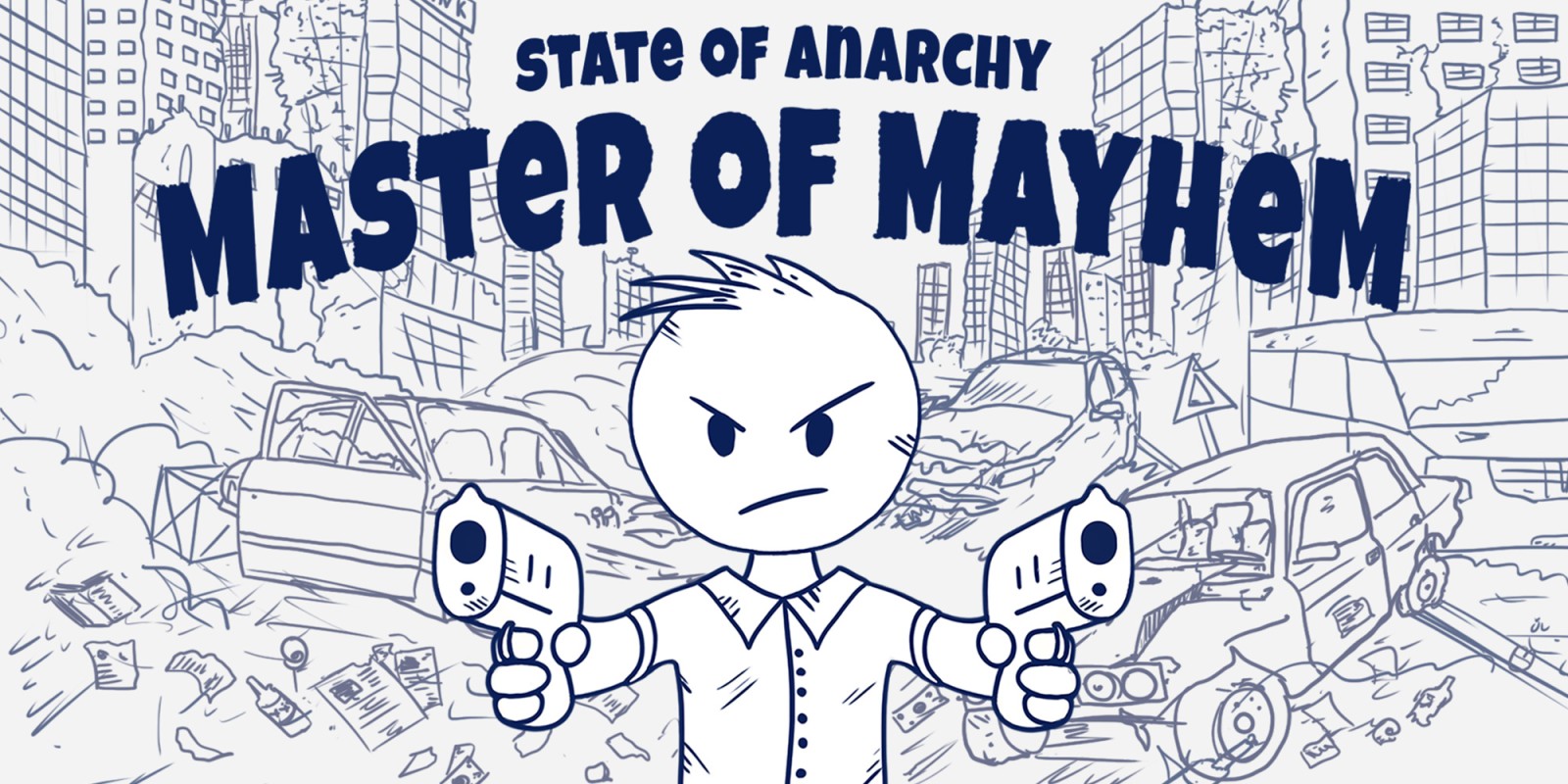 There was probably a time where we all had immense imaginations, doodling in class and making up our own adventures. I also think we had “those kids” who took the doodles to extreme levels with crude, violent imagery depicted on paper. Thanks to developer Sometimes You, State of Anarchy: Master of Mayhem sees those images brought to life, only with minimal effort and maximum carnage. This is a crime spree that is a take on the classic Grand Theft Auto titles, only in stick figure form.

State of Anarchy: Master of Mayhem is a top-down twin-stick shooter and that is basically the whole premise of the title. The story is about how the world has gone into anarchy with aliens having invaded and your best bet is to grab whatever guns you can muster and shoot anyone you can find. Your whole objective is to go out into the city, cause mayhem, shoot lots of stuff, rob banks to earn money, and take out the alien commander. In other words, don’t go in expecting some type of deep narrative experience.

What I would describe State of Anarchy as is a light-hearted shooter, meaning the developer chose to use doodle art graphics and it sort of looks like something a 12 year old would have drawn on the back page of a sketchbook. While this could be a bad thing, I thought it did well in differentiating from many other similar shooters and was a charming way to create the art style. Resources weren’t overly used in pounding out a graphical beast and I can appreciate focusing more on adding a cartoony effect to everything.

There are a solid amount of features included with State of Anarchy. You can unlock close to 50 weapons as you play through, there are over 80 different types of enemies and boss types (even though they all react about the same), and a few different vehicles to drive and ships to pilot. After defeating a boss, there a new weapon upgrades and talents (basically skills) you can unlock for your character. When leveling up you can choose from five different abilities to increase, such as having the chance to heal after every kill or being able to run faster. With weapon upgrades, you can make your gun fire faster, have the bullets fly farther, or have the bullets hit harder.

While there is an open world-like level progression in between missions where you can run-and-gun to further level up, there are set levels to take on, each culminating in a boss battle. The gameplay is rudimentary, yet relatively effective for what it sets out to do. You will guide the bullet-spraying protagonist across the simple sketch-like landscapes, racking up the body counts trying to complete each stage.

It’s tough to really judge State of Anarchy because, while it seems simple and nothing special, it embraces this stance well. There’s no expectations of being anything more than a violent top-down killing spree, and the visual style goes well with the silly soundtrack and vocal sound effects that accompany it. This isn’t a game that’s trying to be anything more than what it is, and there is something good about that. It is a bullet-hell action title that sees no need to try and be some deep narrative-driven experience.

Even with how well it pulls off the simple approach, State of Anarchy isn’t without some flaws. While your character can level up and obtain new weapons, there’s a strange linear take with level progression where you can go around a certain open area and do what you want, but it’s always pointing you towards a single way-point. Players have no option to use the weapons previously obtained, with each new one replacing the last. New guns can only be unlocked by defeating each ‘boss’, which is basically just a stronger looking regular soldier and this is repeated multiple times in very large and densely-populated banks. This repetition begins to grow stale pretty early on, but there’s nothing demanding that players tackle each new stage in any particular time frame.

Overall, State of Anarchy: Master of Mayhem ends up being a competent and fun little indie twin-stick shooter. The gameplay works well, the graphics are simple but unique, and the soundtrack and controls are solid. Even with having no inherent flaws, State of Anarchy ends up just being boring with repetitive mission structures and hardly any variation in enemy attack patterns or gameplay variations. Don’t expect to get hours of a unique experience here, since it’s not trying to be anything more than what it is. Think of it as an enjoyable break from more serious gaming experiences.