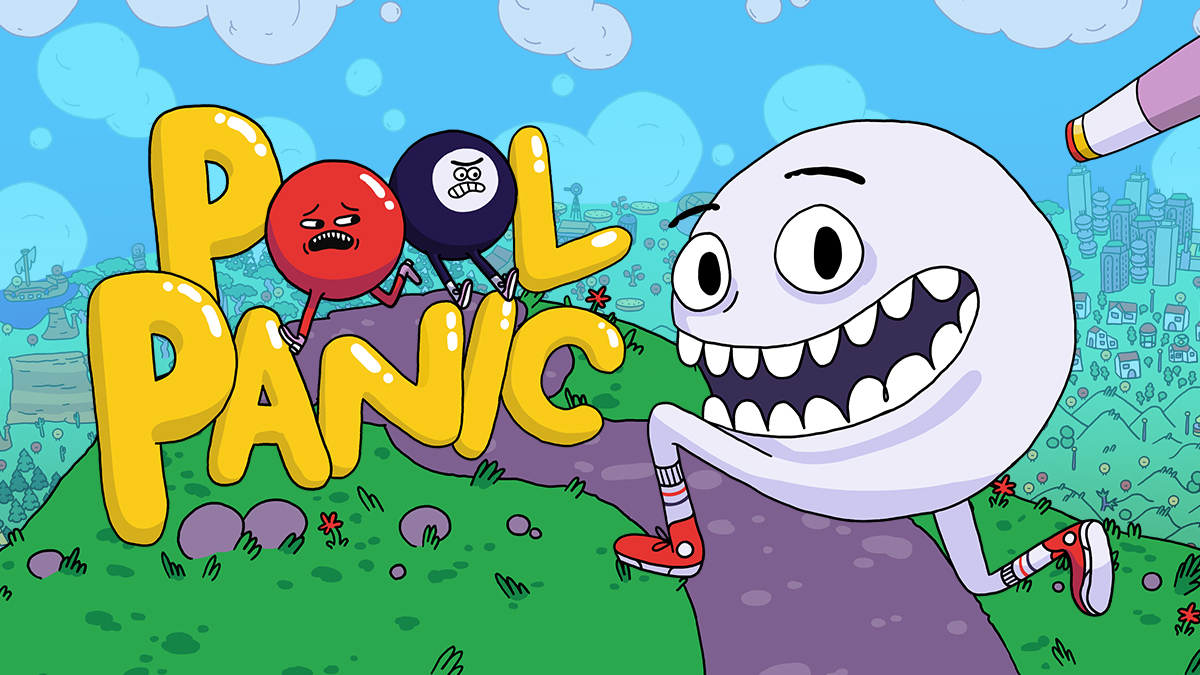 Adult Swim games are generally a hit and miss. They are usually cheap, yet funny spin-offs or references to their shows, and due to their simplistic nature, are usually plonked onto mobile, as in all honesty, their content isn’t worth a full console release. Pool Panic, however, is a creative genius at its best.

No matter how many levels you complete, no matter how much time you spend running around in its open world, every second of it feels like an extra enhanced maniacal acid trip, and it feels good; really good. In all of my years playing games, and especially keeping an eye out for games that really test the limits in terms of comedy and graphical style, Pool Panic takes the cake for being the weirdest, craziest, most out there experiences I’ve ever witnessed, while retaining the most charm you could wish for from a title like this. There’s literally no other game you can compare Pool Panic to. It’s in its own world. It’s its own genre.

Pool Panic markets itself as ‘The World’s Least Realistic Pool Simulator’ and by god, it’s not wrong. This is pool on an existential crisis, this is Pool if Pool was actually played in a Pool. It’s not even Pool. It looks and plays like Pool, but it’s not. The game is literally an illusion. It’s Pool-like, but it’s not Pool, while still retaining some familiar elements from your favourite tabletop pastime. And while Pool Panic, does have the famous game’s name in the title, don’t be deterred if you haven’t been or ever thought about being a fan of the sport, the game tends to stray away from the slow paced action of real-life Pool, hence it’s description.

Rather than straight up taking Pool’s mechanics and bending the rules slightly, Pool Panic is consisted of over a hundred mini-levels, each with their own twists and rules. The only thing ‘pool-like’ about the game, really, is the graphics and characters. You take the role of a sentient Cue ball walking around a traverse, open world and completing short levels. In these levels, you will be greeted with various amounts of different coloured and styled billiard balls, all of which have their own personalities and quirks.

I’m not kidding, part of the fun of this game is getting to know each ball’s personality and how they’ll react in certain situations. For example, the orange ball tends to love their roller skates, and will usually skate out of the way of any direct shot, so you’ll want to ricochet another, less hyperactive ball into them to sink it. These multiple unique quirks and gameplay styles each ball brings to the table offers up a wide variety of replayability while still feeling fresh each time a new level is booted up.

Rather than levels being a cliché ‘clear the table of billiards’ objective, Pool Panic drops you into situations that just cannot be explained to someone who hasn’t actually played the game. Whether the objective is to round up chicken-balls into a pen or lure Racoon-balls out with the explosive-headed Purple billiards, there’s always some subtle changes to the level designs throughout each section of the world that cannot be missed.

Speaking of level design, as you traverse Pool Panic’s ginormous open overworld, you’ll come across a massive variety of different levels from the different themed zones, from your generic desert theme, to snow themed and even a futuristic theme, there is a lot of refreshing scenery and corresponding level mechanics to keep the gameplay fresh throughout your playthrough.

While the game is filled to the brim with levels of all different colours and objectives, within each, you’ll also have four mini-objectives you’ll need to complete if you want to have the satisfaction of 100% the game. These four mini-challenges are usually to complete the table within the certain time limit, using the absolute minimum amount of shots, sinking all possible balls and not accidentally sinking yourself.

Now, although some of these do sound fairly simple, if you’re a completionist and really want the sweet, sweet gold trophies at the end of each level, you’ll need to learn the inside outs of each level thoroughly, finding the best possible sequence of shots and finding small, out of the way, hidden balls within the level.

Something that really bugged me about Pool Panic was its lack of explaining. I’m all for a game that doesn’t hold your hand and bug you with menus throughout your time playing it, but I felt myself getting lost on what I was meant to be doing at most points in the game.

There are some ‘visual’ tutorials but it felt more like I was decrypting ancient Egyptian hieroglyphics than actually figuring out what I was meant to be doing. This does add more to the puzzle nature of the game, but sometimes I find myself doing something that doesn’t actually feel like it has an outcome as there was nothing telling me what the thing I was doing actually did.

Overall, Pool Panic left a great taste in my mouth. It was something fresh and interesting, something that I could see myself coming back to when I needed a short burst of downtime. It’s incredibly different, psychedelic world, characters, wacky level designs and a somewhat intriguingly fun local multiplayer experience more than make up for its major camera and minor control issues, and I would be lying if I said that I didn’t enjoy this game, because I really did. It’s once in a blue moon the gaming industry gets a game that really makes itself its own success, and Adult Swim really hit the nail on the head with Pool Panic. It appeals to every type of gamer, even if you hate Pool.