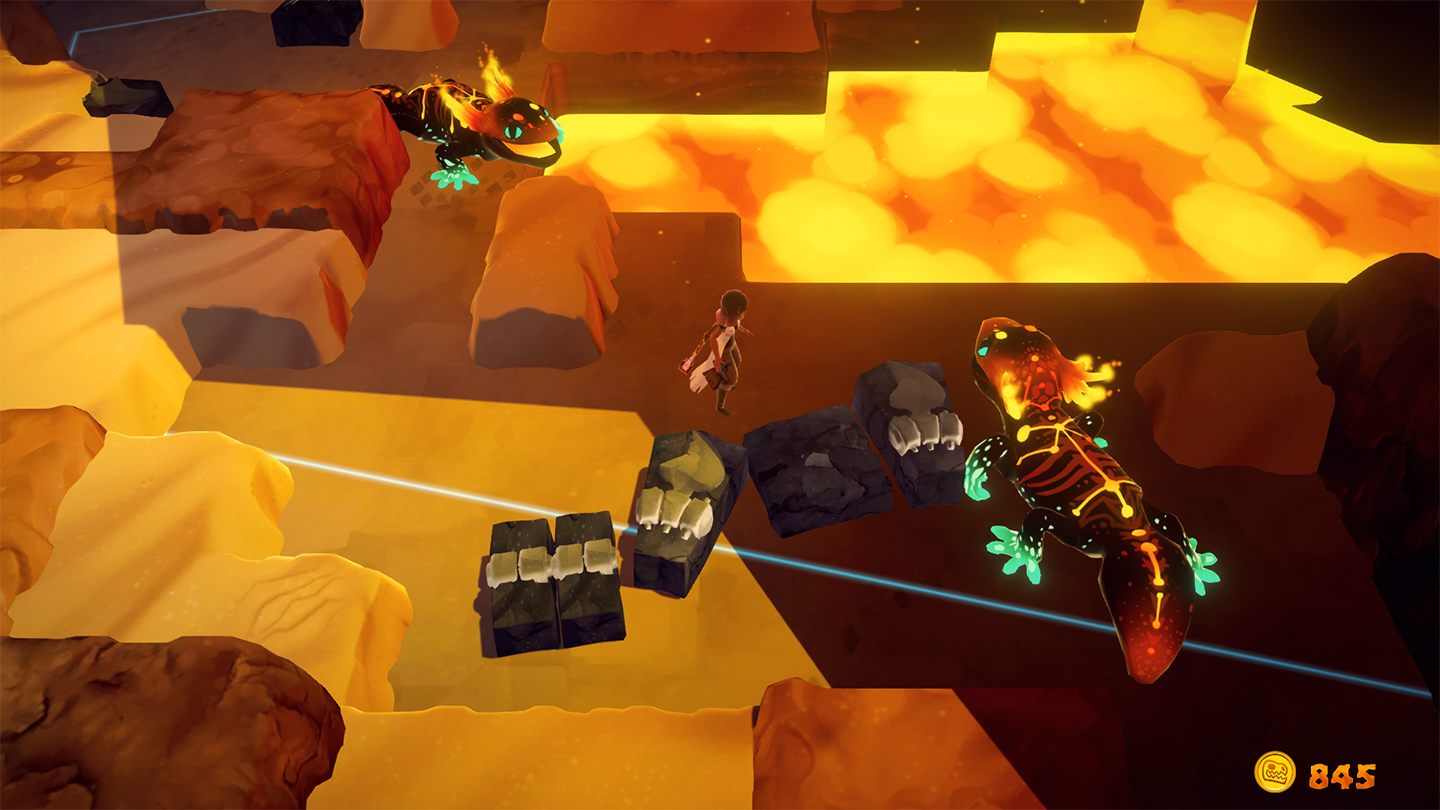 The Neck Bone’s Connected to the Headbone.

Fossil Hunters can be viewed as a love letter project that was brought to the masses by a successful Kickstarter campaign that began in September 2017. The game exceeded its $35,000 goal in the campaign and launched on Xbox, PS, Switch, Steam and a few other platforms.

Fossil Hunters starts you off as a young paleontologist that has high hopes to work alongside a world-renowned team. But as she enters the dig site she finds that the place has been trashed and all of the members of the Elite team have gone missing. Along the way, you will uncover secrets of treasure and journal entries which begin to shed light on to why the team went missing. These little bits are not required as you move through the many dig sites and you will more than likely find most of them along the way.

As you venture deeper into the caves you will be met with monsters of varying difficulties and annoyances. The small crawlers will devour your found pieces and frustrate you immensely. This is where having a team member or members, as you can have up to four players on a team, work together to dig, move, set, and clean bones and also ward off monsters. As your party size increases, it can be difficult however to see some of the areas and move around as the camera stays zoomed in close to the action and everyone is confined to the same screen.

You control your Fossil Hunter by moving them around the stage with the left analog stick and dig through the dirt with your pickaxe uncovering fossils, as well as the occasional coin drop keg of dynamite. The dynamite kegs can be used to clear out large areas of dirt and open up rocks blocking pathways to more of the dig-site or a hidden treasure.

Throughout the game, you will also come across pools that will power up your character allowing them to run or dig faster. The main action in the game though will have you dragging and turning fossil pieces as you construct predetermined creatures mapped out on the floor, or create your own giant dinosaur.

The dragging and lining up of pieces can become tedious quickly as you also have to balance between cave-ins, which can be thwarted somewhat by deploying braces overhead where cave-ins will typically occur. My biggest gripe with the cave-ins is that it can sometimes be difficult to discern how much you can actually dig in an area before a cave-in occurs, they also seem to happen more often when you have 3-4 players in your group.

Most of the gameplay can be summed up as completing a skeleton with a certain layout of bones to advance to the next dig site, and many times the cave-ins seem to artificially pad out of the time needed to complete a floor. During one such dig site, it took me nearly 30 minutes of searching for one specific piece to complete a skeleton as every cave-in only netted me the pieces I already had. When I finally found the piece I needed a cave-in occurred right over the creation wiping out a third of what I had made.

After you unlock the dig site skeleton you are free to build any creatures with the bones you find. You can move them up and down floors by way of the elevator taking pieces you find in the lower caverns and combining them in ways you couldn’t before on another floor or in your main lab. This kind of free play creation mode encourages building more elaborate dinosaurs rewarding you coins and occasional gems. The money is used to buy braces and lamps to help secure your dig site and keep enemies from breaking down your fossil creations.

Fossil Hunters won’t be a ground-breaking game that you will remember the music or audio from. In fact, it seems that sometimes the games audio queues get mixed up as you transition from site to site. The load screen, as you take the elevator up or down through the caves is an appropriately sounding ‘elevator music’ of smooth archaeological jazz tunes. The dig site music though is more subtle and lets you hear more the surroundings of the echo dirt as it falls during the cave-ins or the subtlety of the monsters lurking about the cavern.

The audio clues you into when you have snapped a piece successfully to its partner, and the sound that you hear when you have completed a new creation is enjoyable every time. Other sounds you will hear are the digging through the dirt or rock pieces that sound appropriate but will wear thing quickly as you hear the same audio over and over again. I actually played some of the game with the volume almost completely off as I had a movie on in the background. I didn’t feel like it hurt the gameplay any as I played this way, but I doubt that is what the developers of Fossil Hunters intended.

As you complete the various tasks in Fossil Hunters, whether it be the side missions given to you by the person on the other end of the radio or the mapped out creatures within each dig site you may come across some graphical as well as game breaking glitches. One such glitch came up numerous times during my playthrough with my daughters. As the three of us played one character would sometimes glitch out of position and off-screen into some abyss. The only way to recover from this was backing out of the game and selecting our characters again. This wasn’t too terrible of a bug as the game saves your creation and dig site every time you exit.

Other bugs that I encountered were less of a hindrance like when a gem or item I was holding would glitch and fly out of my hands around the room. I also saw several instances in our party of three that left two people out of the elevator and floating in space as we left or entered a new floor of the cavern.

I had been looking forward to Fossil Hunters from the moment I saw their Kickstarter and my 10-year-old (who wants to be a scientist, maybe even a paleontologist) exclaimed that this was a game she wanted to play. While both of my daughters enjoyed the game a lot as we played together some of the annoyances of the game like unpredictable cave-ins ended up frustrating them more and more. We would play together and work together to complete the tasks creation, which helped us develop great communication skills. In some ways, Fossil Hunters multiplayer reminded me a lot of Overcooked. Your success, or failure, depended a lot on how well you work as a team in communication and helping one another.

For that alone, I would give Fossil Hunters a high score because I really value, as a father, those types of games that get my daughters working together for a common goal. In Fossil Hunters, the sum of the parts of the game doesn’t always add up. While there are a lot of things I like about Fossil Hunters, and the game does skew a bit towards the younger audience, it’s hard to really recommend the game fully without hesitation.

Fossil Hunters does a lot to live up to its creation of endless skeleton creature possibilities and for most kids and even some adults that will be enough to satisfy. I myself found that outside of the couch co-op gameplay with my daughters that the game wasn’t really what I had hoped. Fossil Hunters is definitely best played with 1-3 other people but falls short in the single-player game as small tasks will take longer as your character moves slow and digging is sluggish.