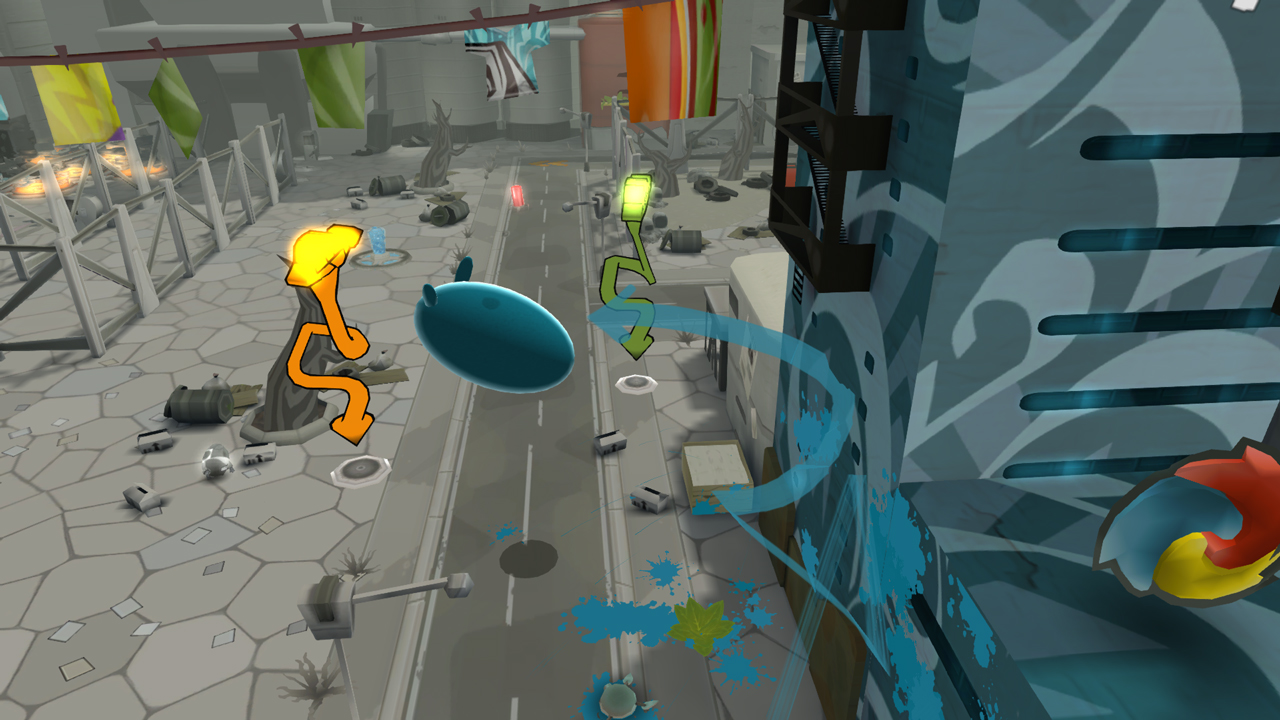 The ROY G BIV of platformers!

de Blob first painted our screens back on the Wii in September 2008, and over the years, has seen many re-releases. From having a canceled DS version to a mobile debut, a PC release and even an HD port that came out on Xbox One and PlayStation 4 in 2017, at long last, de Blob has returned home to a Nintendo Platform, thanks to the Nintendo Switch.

de Blob starts off by showing you a world in peril after the evil INKT Corporation has drained the city and its citizens of color, fun, and freedom to play. Our hero is tasked then, alongside a hodgepodge of characters, to accomplish painting the city, unfurling the wrath of the INKT Corporation and its robots and various minions through races, painting landmarks, close combat splatting, and more.

The game’s story unfolds through cut-scenes, loading screen story panels, and through dialogue quests given to you by your CPU teammates. There are humorous moments in the short movies reminiscent of Dreamwork’s Minion characters or Ubisoft’s Rabbids. The slapstick humor isn’t a deep story, but you will get some smiles as well as wry smirks as you watch and read up on all the shenanigans. de Blob has a great bit of variety and content in its game that comes first in its main mission story quests that have you painting sections of the city before moving on to the next area to liberate the Chroma citizens from the tyranny of their overlord Comrade Black.

de Blob is a ball of paint rolling action platformer game that sees you completed various tasks to be awarded enough color points to unlock the next gate or section of a part of town to advance onward and deeper. Along the levels, you will find paint replenishing inkbots that will allow you to turn various colors to paint billboards, apartment sky rises, Chroma City landmarks, and more. You will come across hazards like blank ink that will drain your life the longer you are covered in it, as well as fiery hot plates that will eat away at your time and health points.

As you complete missions you will be awarded for your time, by being given more time to adventure and explore through the world gaining more points and finding secret gateways to hidden areas. de Blob traverses his world by rolling and hopping from ground to rooftop and higher still by attaching to jump points scattered throughout the world. Some of those jump points are to help you reach otherwise unattainable heights where secret bonuses are usually hidden. You also get a sense of the mission objectives as you visualize the world layout from above.

It’s great that there are some varying options when traversing the world with de Blob because one thing that is still slightly annoying and painful is in regards to controlling de Blob and the slow-moving camera. De Blob bounces feel a bit Jell-O like and floaty and the camera tends to wander to the left or right keeping a straight line of sight on your next jump hard to do. When de Blob is painting a building or wall he tends to stick and slowly descend, which may be intentional but as I played further and further through the game it just became more and more annoying to me how sluggish his movements some time felt when I needed precise controls navigating high above the ground below teetering on a small pipeline or edge of a rooftop.

The nice thing about de Blob’s paint mechanic is that you can quickly and easily see where you have been and where you need to go due to the lack of color on anything you have yet to touch. There are a few other modes that I got to try out before reviewing the game, some of which are great diversions from the main game, like the Free Paint mode, which has you revisiting past areas in a more free-spirited, enemy-free (but not hazards free) environment. I could see younger kids having more enjoyment out of this as it takes away some of the challenges with the game’s platforming and paint-by-numbers mission structure of literally painting certain buildings certain colors.

The other mode, a multiplayer mashup of some of the single-player game mechanics have you racing to paint as much of an area in your color, which your teammates also can paint over your color in a kind of turf war mode. There is a king of the hill mode as well, where one player starts off being able to paint the world and the other characters are covered in ink set out to splat the other teammate. These modes weren’t necessarily throwaway matches, but they weren’t full experiences either and de Blob is first and foremost, and for the most part, a single-player story campaign along with the aforementioned free paint and chill mode.

A shining area of de Blob’s core mechanic can be found when you begin painting buildings and the tracks of music begin to layer themselves as you bring life back into the Chroma world. As you color the world around you various instruments accompany each color and splashing a variety of paint in a certain part of town or on a city block will begin to layer multiple instruments on one another. This symphony of direct feedback for your actions makes playing de Blob always sound different based on what colors a player is using and gravitating towards.

As you splash paint on buildings you begin to hear the cheers of gratitude coming from citizens as you release them from their grayscale prison. The applause and admiration from the tiny people keep you pressing on through the depressing stage of inkblotted landscapes and dull vistas. As you encounter enemy battles there is a satisfying splat sound with each crushing blow you deliver. Dropping into black ink will give you audio cues of de Blob being hurt and there is a splash of refreshing waterfall sounds coming from various fountains littered throughout the world.

Your teammates from the Color Underground speak with a less painful, garbled ‘Animal Crossing’ gibberish that has enough to differentiate them from the hippie artist who just wants to paint buildings to the tough muscle that has a gruff sounding tone. Each character is endearing, but not all that memorable as they mostly are there just to give you more tasks to complete. de Blob for Switch is a fantastic example of a 10-year-old game seeing a second life on the new portable system. The colors aren’t as crisp and vibrant as Splatoon 2 is, or even Splatoon 1 for that matter. There still seems to be a bit of fuzziness to the game’s graphics in this HD update which leaves it looking rough around the edges in some places.

Overall de Blob for Switch is a great nostalgic fix if you were a fan of the original and just want to replay the game on the go in either handheld mode or docked. There isn’t anything new, at least that I found, but the games single-player focused campaign is worth at least one visit. The camera controls and movement issues may keep some people from venturing into every nook of the games level design which is a shame. If you are a completionist there are tons of challenging paint buildings a certain color, race to beat the high score, and enemy entanglements to keep the variety going. The game won’t challenge you to the point of frustration but it will keep you hooked with its sweet building platforming, paint design, and the musical mashup.