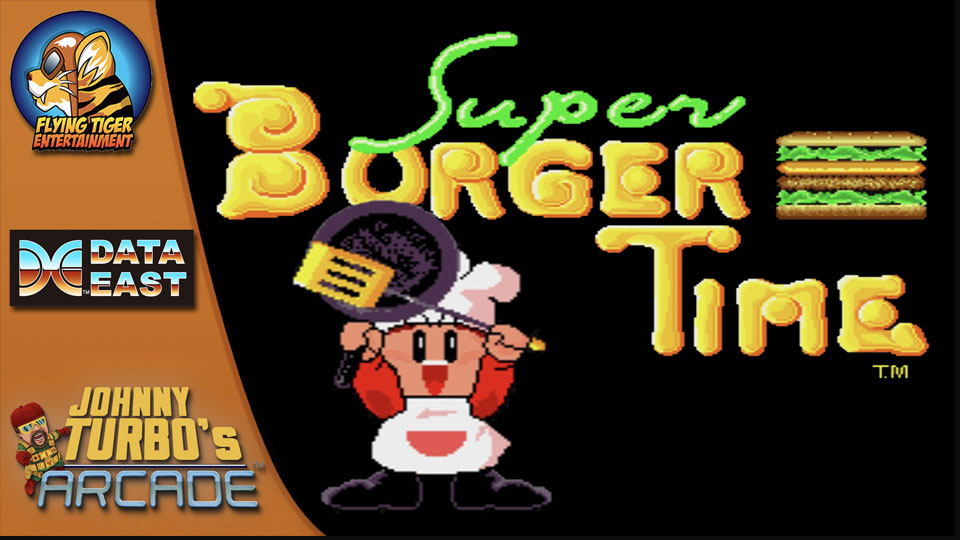 Peter Pepper Jr., is that you?

When BurgerTime released, the year was 1982 and developed Data East created the arcade title, to be part of the DECO Cassette System. It was an arcade game that starred a hero chef by the name of Peter Pepper, who must navigate a maze of platforms, whilst walking over hamburger ingredients and evading enemies. By no means was the game a colossal hit, but long before Data East went bankrupt in 2003, BurgerTime did go to get a spin-off and an arcade sequel by the name of Super BurgerTime in 1990. (There was also a console-only sequel by the name of Diner.)

In a lot of ways, Super BurgerTime was a lot like its predecessor. Similar premise, similar gameplay, except new features like co-op was added, graphics were greatly improved (it did release 8 years after the first game) and Peter Pepper Jr. replaced his dear old dad. Despite all these years, Super BurgerTime has found a way to remaining relevance, even in today’s modern age of gaming, and now thanks to FTE Games, Super BurgerTime is back at the forefront once again now that it’s released under the “Johnny Turbo’s Arcade” banner and goes by the name of “Super Burger Time.”

Coming to Switch, Super Burger Time hasn’t changed all that much, but it does have video capture and the means to make the game easier than ever. There’s no changing its difficulty, but no longer must you bid adieu to the change in your pocket as the Switch release will allow you to give yourself 99 credits and still add to them, just as soon as you lost at least one.

Naturally that is cheating, not just the game, but yourself as you’re denying yourself the chaotic challenge that Super Burger Time has to offer, but the number of credits you choose to enter, is up to you, so Super Burger Time can be as hard as you want it to. However you choose to handicap yourself, at least the one thing that remains the same, is the actual gameplay. There are handful of worlds for you to complete with the fourth stage of each world being a boss battle. In boss battles, you must use the burgers Peter Pepper Jr. has successfully completed in previous levels and keep lobbing them at the boss until the battle is over. But, being bosses, they won’t make it be easy for you, as they will constantly be moving and doing their best to kill you in return. Unlike them, it only takes one single hit to kill you.

The same is true for all enemies in the game, so the likes of Mr. Egg, Mr. Hot Dog and Mr. Pickle are just as deadly as ever and they have plenty of friends, to torment you. Moving on, on the levels leading up to boss battles, the stages can vary in size, with the smallest one being a stage fully displayed on the size of the screen, and enemies will hound you at every turn. Failure to put down an immediate threat can result in a frantic challenge to navigate every path and ladder, in your bid to stomp on every burger part to complete each and every on-screen burger. To make matters worse, Peter Pepper Jr. isn’t that great of a jumper, so ladder climbing is a must and the pepper shaker weapon he wields, is only his to wield for a temporary duration. So, when it’s gone, as are your chances of survival…unless you make it to the side of the screen. Additional weapons and power-ups can be collected, but you do need to live long enough to acquire them and use them.

Being an arcade game, naturally, Super Burger Time is as much about making burgers, as it is about getting the high score and while completing burgers can help you rack up the numbers, so does expanding your burgers. With enemies being potential ingredients themselves, anything that falls on top of them, will cause them to become an extra ingredient for your work in progress. Therefore, if you can add them to your burger, do so because it will benefit you in the long run and if it is a high score you’re after, every time you need to continue, you’re skill will revert to zero. But, who knows, maybe with a friend on hand, the two of you might just be able to survive all the way to the end, on a single credit.

For what it is worth, the Switch release of Burger Time does have a variety of screen styles for players to choose from, in case they wish to go for a more authentic look, or just make Super Burger Time look like it’s a VHS. You can also alter the aspect ratio from 4:3, to 16:9 and filled, but other than that there’s really all that much to Super Burger Time, other than the fact it will let you save your game state any time you want to quit and upon completing the game and choosing continue, with have you start back at the beginning of the adventure.

Having missed out on BugerTime and Super BurgerTime the first time around, it was nice to play something of a classic in this day and age, but with more and more arcade games of old, making their way over to a fine Nintendo platform, nostalgia and a love for old arcade games is not enough to make it a must-have title for anyone who ever played an arcade title. I’m not saying the game its past its peak and needs putting out to pasture, but in the case of Super Burger Time, it could have done with something a little more, to stand from the crowd.