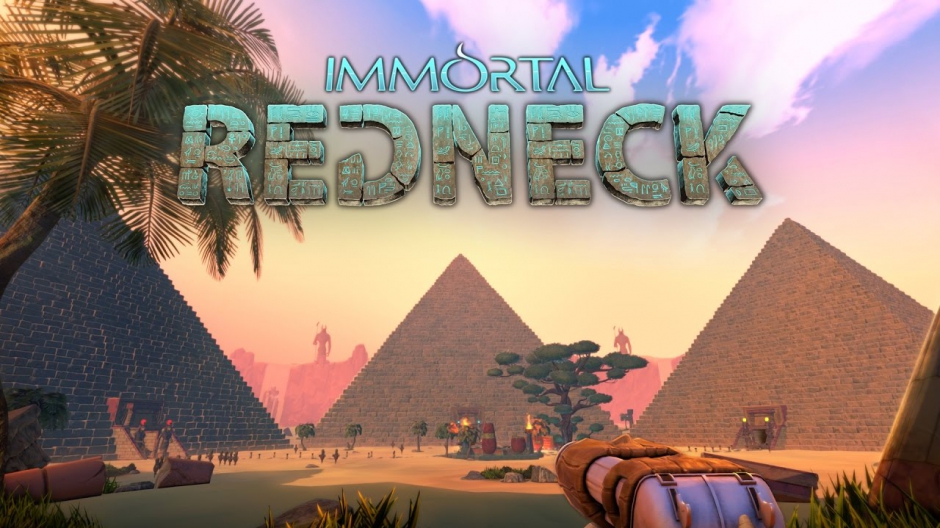 It’s all about becoming the best Redneck Mummy we can possibly be!

When we think of Roguelike or Rogue-lite games, we normally imagine a 2D game or in a few rare occasions, a 3D game with third person or god-like view. So, how does a game of this genre fair, when you mix it up with some FPS (First Person Shooter) gameplay? Would it be a success, or a massive failure? These questions are exactly why I took Immortal Redneck for a test drive and it’s time to share my thoughts!

Developed and published by Crema Games for the Switch and a few other platforms, Immortal Redneck is the result of what happened when Crema Games decided to mix the FPS and rogue-lite genres.

Upon booting it up for the first time, you are greeted with a cutscene that introduces you to the story and the world you are getting into. This cutscene is beautifully done and is also almost a great introduction to the visuals you will get from the actual game. Almost everything in Immortal Redneck is well thought out and fits with the mummy, Ancient Egypt and Egyptian Gods theme that the game wants to represent. The only thing that bothered me, is that some locations or guns design didn’t stand out as something to appreciate and look forward to, as some other locations and guns splendidly did.

One thing I have to praise, is that the enemy designs are easily recognizable and distinguishable, letting the monsters abilities shine through their design and animation. I understood almost all the enemies’ styles and patterns in a matter of seconds of meeting them. Even with the bosses, this idea applies, although it may take a little more time (and even a few deaths) to fully understand them.

Returning to the initial cut-scene, it also show us for the first time, the voice work and sound effects that were made for Immortal Redneck and I’ve got to say, the quality of  the work that was invested in them definitely impressed. The voice acting isn’t as prominent in the game as I originally thought it would be, but the character comments that will pop because of a few occasions and actions, like picking up guns, are very interesting and I may have laughed because of it a few times. The sound effects and music are also well done and won’t bother your experience, but, sadly, they aren’t all the memorable either.

In Immortal Redneck, you play as a Redneck, who one day is driving his dune car during his vacation trip to Egypt and suddenly, he suffers a car accident that throws him in the sand to die. But with an external and divine intervention, he gets mummified and wakes up in a coffin, ready to go and storm through the pyramids.

This story is, at its core, very basic and created as a set up for the main game, but is an interesting introduction to the game, even if it ends up being forgettable (I had to re-watch it to make sure I remembered it correctly) after a few days and gameplay hours as each replay doesn’t really add much to the overall plot. But I appreciate the dedication of the developers to make a great introduction, character commentaries and contextualization for the game.

But what the developers really strived to do well and in a fresh way was the gameplay design. Mixing up the FPS genre with some Rogue-lite elements needed a lot of attention to avoid that this combination felt short. And for the majority of the gameplay portion, I feel that they did an excellent job of making the best gameplay possible.

Each run consists in you entering in one of the pyramids, going through each floor defeating all the enemies in the rooms you enter or getting to the chest, filled with items, until you get to the stairs to the next floor. Each new floor, the enemies get stronger and the item drop increases. These items can be a steak that heals you, an ammo bag, that refills your ammo, gold and more rarely, scrolls, which can really change the game for good or bad. When each run ends, you can spend your money on upgrades and unlock the merchant and new gods to bless your adventure.

This gameplay loop is well done enough and each run ends up feeling unique, especially when you factor the scrolls into the equation. For example, in one run, I was going very well, until I got a scroll that reduced half of my life and gave me 2 new scrolls, one of which ended up being this scroll again. This left me with low health and I ended up dying shortly after. Also, with the upgrade each time you get stronger and better, allowing you to get further and further and getting better at the game.

I also like that, as you unlock new amulets of other gods, the game gives you the incentive to change and play with the influence of other gods, each with a different weapon set and abilities, by giving you a boost in attack, defense and other stats. I ended up finding 2 gods the matched my playstyle, but from time to time, I switched to others to enjoy this boost.

One thing that I felt limited, when I started playing, was the fact that you don’t know the position of all the enemies, because of the first person view. This led me to take some unnecessary hits, especially from the goat monster. But with time, this ended up becoming a minor issue as I adapted to this new style and relied a little on the sounds and special abilities to protect myself.

Finally, I noticed that there is a bit of a difference visually when playing in handheld mode and when playing on TV. It isn’t as jarring as it sounds, but it bothered me a little in the beginning. I also wanted to feel the HD rumble better than it was implemented in Immortal Redneck, but a more specific HD rumble can always be added through patching.

Immortal Redneck is a game that succeeds in what it tries to do. By mixing up two distinct genres, the end result is a highly addictive experience that can have you spending up to two hours on a single run. Yeah, there are few things here and there that may bother you, but it is really an amazing experience that I am happy to put in the same box as Enter the Gungeon, which is also available now on the Nintendo Switch.