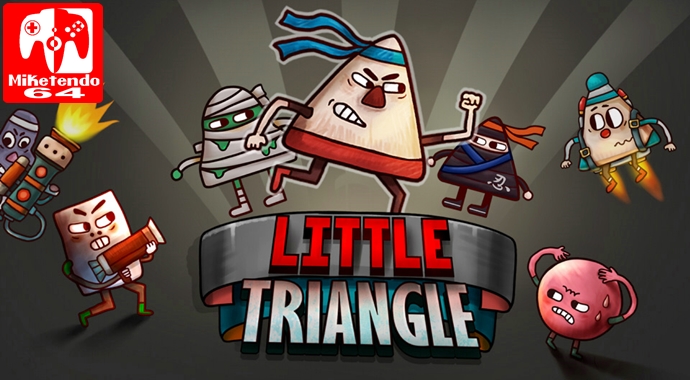 Little Triangle is a quirky, simple game that doesn’t take long to start playing. You’re thrown into the game play immediately, and it’s easy to pick up.

The first level of the game is a “tutorial” that shows you the buttons. A quick montage plays to show the story of the game but then you get right into it.

Little Triangle literally only uses two controls — the analog stick for movement and the jump button to attack enemies and dodge attacks. The controls are smooth and responsive, with the character moving quick enough to allow you to fly through the levels.

It’s quick and easy. In the multiplayer co-op mode, you have to jump on top of each other to reach certain areas of the level. When you’re playing alone, however, you can breeze right through yourself jumping on springs. The levels are pretty short, though you will die a good amount.

You have three hits per life, but reaching one of the multiple save points throughout the level will replenish a hit point. There’s no limit of “lives” for your character, with you just respawning at the latest save point as often as you died. Most of the enemies are able to be defeated with a couple of jumps to the head, but the hitboxes are small enough for us to miss once in a while. We utilized the save points often.

Of course, the save points only respawn a heart to the first player who go there. That took us a while to realize while Kris was at full health but getting all the save points and I kept dying over and over. There’s also a battle mode for multiplayer which was fun as well. Weapons are scattered throughout an area and you just chase after each other and try to kill one another.

The graphics are definitely interesting, with the game being a 2D platform. The backgrounds make the world look gray and gritty to go with the story, but the characters are simple shapes, most notably triangles.

I didn’t mind the graphics. It certainly looked weird to me at first but it’s nicely done. I like the “triangle” aspect of it. It makes the game look so simple. It really shows that they focused more on the level design and backgrounds which was great. It really worked.

The graphics did work well, I agree. I was really digging the music as well, with the tunes reminding me of spy movies, like James Bond. Even the boss levels had high-energy music, drawing us into the tension and need to complete the level, even if it also made us “panic” enough to start laughing at each other’s mistakes and how often we died.

The music was fantastic. It was upbeat and really made you get into the moment of the game, of each level. Yes, the boss battles were great accompanied by the music and just in general.

Little Kingdom has been taken over. Triangle, you, have to go through the levels to take back the kingdom and to also save your friends.

That’s literally the story. Some alien-like creatures abduct other civilians of the Little Kingdom and, as the main character, you go through the levels while trying to find the other characters to free them.

As you free characters you unlock them to play with them through the levels. There’s not much to it, but the gameplay of each level make up for it.

Little Triangle was fun for a while, with the levels being played either in single or multiplayer mode. It’s something you can pick up with a friend who’s playing it for the first time, and the versus mode was quite entertaining! It’s something I wouldn’t mind playing again, but it probably won’t be my first choice.

I definitely found this game to be more fun when I was playing with Kris. There’s more to the levels when you’re playing alone, such as saving other Triangles and gathering more diamonds. However, it was certainly more entertaining when you play with a friend. I can’t see myself playing alone, but it was still a fun game.