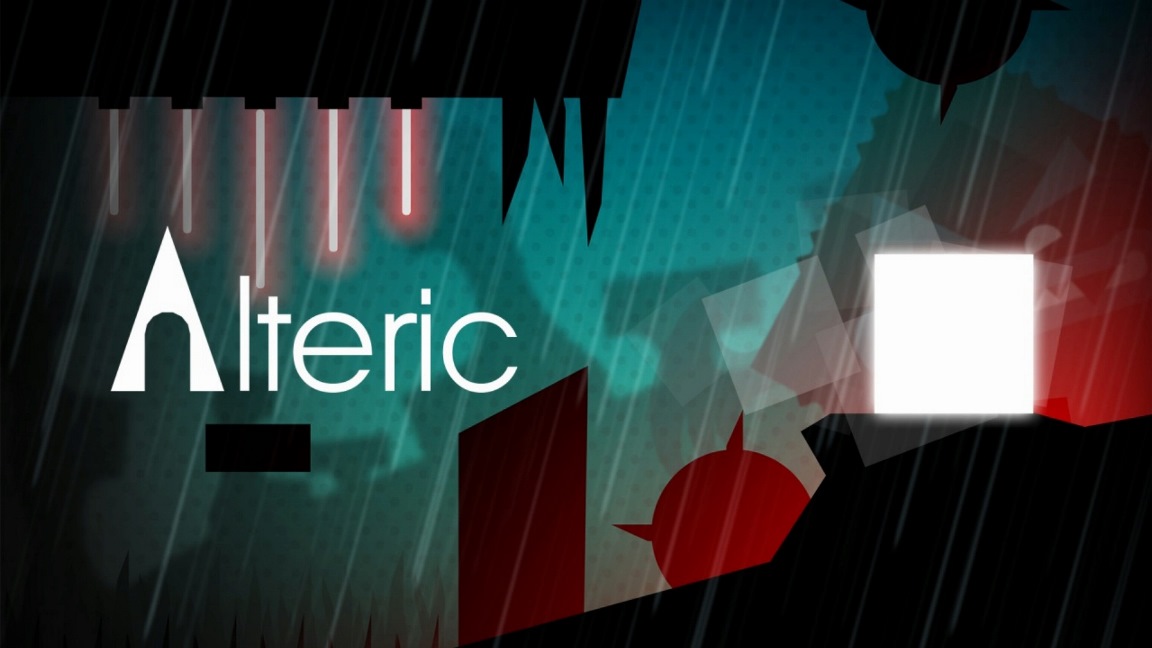 One look at Alteric and you might be convinced that you are playing Thomas Was Alone or a sequel to it. Upon further inspection, what you have with developer goonswarm’s Alteric is a title that has some good gameplay concepts, but doesn’t really come together in a completely successful way. I felt like I was missing the emotional experience of a title like Thomas Was Alone and the fair, yet challenging platforming of a variety of other Nintendo Switch platformers.

Alteric is a somewhat basic action-platformer where you play as a white square progressing through progressively challenging levels. The main gimmick is that you are able to switch between two different dimensions. In one dimension a platform may be in a spot that it’s not in the other dimension. You have to quickly switch between the two dimensions in order to avoid spikes that may be in your way, or being able to get a platform to appear just in the nick of time so that you’re able to continue moving.

There are three different chapters with thirty levels total increasing in difficulty as your progress and a few new puzzle elements are introduced. The new mechanics that are gradually introduced are minimal, including the ability to push boxes to block lasers or a gravity button that will flip gravity when pressed. Switching between planes makes for an interesting gameplay mechanic and provides some clever ‘a ha’ moments in the level layouts. Add in other obstacles such as the saw blades and the aforementioned lasers, and you have a combination of obstacles that provide a fun challenge, at least initially.

It’s immediately apparent how similar Alteric looks to Thomas Was Alone. The design is minimal, yet successful at displaying the different color palettes in unique ways and clean edges. There are some nice particle effects with most of the platforming being done on black platforms, while the backgrounds swirl in different colors depending on the dimensions you change between. The soundtrack was also a highlight, featuring some appropriate tunes to make the difficult platforming less frustrating.

The platforming is simple yet serviceable, but it does feel too slippery with oversensitive movements that will send your character flying. You can control your character with either using the d-pad or left analog stick, and in fact, you can just use the d-pad for the entire game by pressing up to jump and down to change between dimensions. Because of this, using the d-pad is more of a pain because if your finger just barely slips you may end up flipping dimensions when you didn’t mean to.

At the end of each chapter, there is a boss encounter where you have to destroy these red gems that stick out from the bosses body. When you die the boss doesn’t reset though, so whatever red gems you had destroyed before are still gone and this means the boss battles end up being rather easy to complete. You can just keep dying over and over again until you eventually destroy each one of the gems.

Alteric doesn’t feature any type of story and didn’t take that long to complete, taking roughly 2-3 hours in order to get through and this also depends on how many times you die. This is where my main gripe with Alteric comes in as it demands precision from the player, but the jumps are just too floaty and the platforming never feels just right. In a title like this that demands almost complete perfection that can be terribly frustrating and even sometimes unfair after playing a game like Celeste or even Super Meat Boy.

Overall, Alteric is a decent platformer, but it lacks charm and the controls in particular leave a lot to be desired. With so many great and fairly challenging platformers to be had on the Switch, it’s going to be hard to completely recommend, especially to anyone who isn’t a platforming enthusiast. Alteric seems to be missing the charm of Thomas Was Alone and the rewarding hardcore platforming of Celeste, making for a title that in the end comes off as unsatisfying.