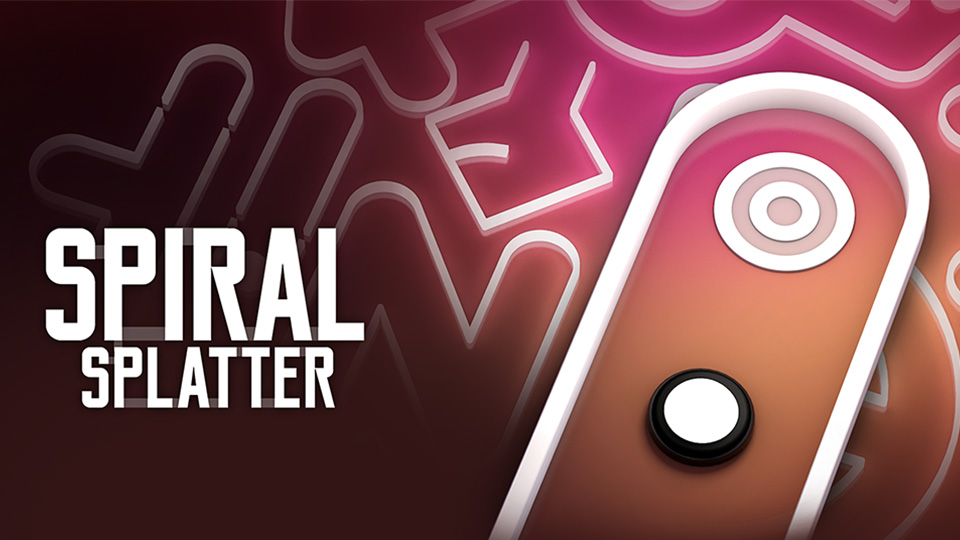 Running straight for the goal will only get you so far!

When not publishing games like North to Nintendo Switch and other platforms, Sometimes You are also a developer that are responsible for all three Energy games, (Cycle, Balance and Invasion) that came out in January 2018, and the publisher who so happen to be bringing One Eyed Kutkh and North, to Switch this March, but they’re not the only games on the agenda this month!

Also to see a Switch release is yet another puzzle game by the name of Spiral Splatter and it’s a little different to the previous Sometimes You offerings. Previously released on Steam last year and developed by Neonchimps, Spiral Splatter is a self-described “brain-bending arcade puzzle game” that will test both your mind and your patience and with 11 stages/106 levels to play through, it will keep you busy for a few hours. Now, in typical puzzle fashion, gameplay is relatively simple as it’s all about solving the puzzle and the way it is executed and with Spiral Splatter, the puzzle solving is done by moving a singular ball to the goal.

Naturally there will be obstacles in the way, be it a maze you must navigate though, without ever touching the sides as that will kill you and cause you to start anew, a maze that rotates, barriers that can be temporarily disabled and turrets that will blast you. Obviously though, you won’t encounter all of these things from the outset as that would be madness, not to mention cruel. What you do get though, is an increase of difficulty and additional obstacles with every new stage you’re able to unlock, provided you have enough stars.

While it is true, you can take as much time as you could want to beat each and every level that will only get you so far, as each of the game’s 11 stages, which comes with backgrounds of another colour, and getting the stars can take a mix of skill and speed. Should you be able to complete a level as fast as you possibly can, you’ll get 3 stars, but holding A to move fast will on get you so far because without quick reactions and some strategic thinking, speed will get you killed over and over and if you feel the collision warnings are what’s getting you killed because they’re too distracting, trust me, they actually do more good than harm!

So, as tempting as it is to hold the A button the whole time, there will be plenty of instances where you will need to let go off it and then hit it briefly for a kick spurt because there are some levels that allow you to make some mistakes and still get to the end in time, but others will punish you brutally. The good news though, should you not care about getting 3 stars on every level, on the harder ones that use check points, you could always aim for two and come back to them later on when you’ve take on some of the later and more challenging levels before revisiting previously beaten levels and putting the training wheels back on the bicycle. Should you feel you have messed up too many times on a single level though and you feel the splatter marks from where you’ve previously died, are too much, you can always hit X to refresh the level and/or restart when things go bad and you took too long to beat a level when going for 3 stars and because that’s pretty much everything, it’s time to bring the review to a close!

Reputation aside and the fact that Spiral Splatter is yet another game that abides by the ol’ “simple to learn, but hard to master” concept, Spiral Splatter can be as enjoyable as it is maddening, but if you check it out, I highly implore using the likes of a Pro Controller. With bigger buttons than what we get with the Joy-on, it does actually make Spiral Splatter a little bit easier to play, so food for thought anyway! But Spiral Splatter does only cost $4.99, so even if you’re unsure about checking it out yourself, it is an affordable title nonetheless.

Did you enjoy our Spiral Splatter Switch Review? If you would like to read more of our Nintendo Switch Reviews, feel free to check them out here.