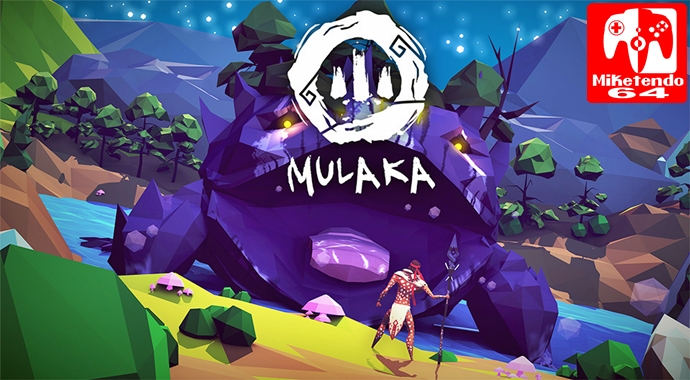 ‘Mulaka flies onto Switch fresh straight from the Sierra Tarahumara in this all-new adventure!’

Mulaka does everything an indie 3D action/adventure game should, it combines a rich, interesting story and phenomenal culture with gameplay mechanics that constantly evolve and keep engaging players. The unique, vibrant, secret-filled world of Mulaka allows players to progress in the story the way they want to; and this freedom is what makes Mulaka a must-have indie game on Nintendo Switch.

In Mulaka, you play as the Sukurúame, a Tarahumara shaman as you fight in the corrupted and evil-ridden lands of the Sierra Tarahumara. During your adventure, you call upon the demigods to gain and use their abilities to your advantage. The main unique component of Mulaka is the lore and backstory behind the game that the developer Lienzo carefully implemented; the control of a Rarámuri warrior, exploring the real landscape of the Sierra Tarahumara and authentic Rarámuru narration, all packed into one, handcrafted, charming game.

The story of Mulaka is all about the birth and creation of the world, with the lore of how the Sun, Moon and Twilight want to demolish the planet. The Sukurúame is called to protect the region with the powers bestowed by the demigods. As you progress throughout the story, you learn more about the culture and language of the backstory and folklore, which is more interesting than you’d first think. Along with the culture and language, the soundtrack is also heavily used to complement the story, and it feels extremely unique and at home in the Sierra Tarahumara with its authentic instruments and vocals.

Gameplay-wise, Mulaka feels similar yet unique, as it combines the smooth feeling of movement and combat from games such as Prototype and Saints Row IV, however, the thing that keeps the game’s mechanics feeling fresh, is the different enemies and abilities you’ll encounter along the way. Some enemies will require strategic planning to take down, such as dodging, using heavy attacks to break defenses and even using your special sight move to see enemies that are usually invisible to the naked eye.

Structurally, the game itself is similar to Super Mario Odyssey, you are dropped in a world, and you are free to explore the level and achieve small side objectives until you are ready to move onto the next boss fight. The boss fights themselves are challenging and new, and are always a treat to try and complete. Some had me stumped for a while until the answer clicked with me and the satisfaction of them falling to the floor hits. After each fight, you are rewarded with additional story, a new ability and a new world.

The combat for Mulaka is at most, questionable. It works well for what it is trying to achieve but overall, attacking feels clunky and difficult. Even though you can see your character dodging an attack, sometimes you are hit regardless. The heavy and light attacks feel out of place and are not fun to combo into each other. Throwing the spear is one of the most painful things to do in this game, they take a page from Breath of the Wild’s books and include gyro-aiming, which is fine, but it is executed very poorly, moving slowly and being wildly inaccurate. This could be excused, but seeing as there is a specific extremely annoying enemy that can only be defeated with the spear makes the game extremely frustrating to play sometimes. Aim assist on the spear could definitely remedy this fault, however.

During your playthrough, you will find multiple different NPCs that will help you on your adventures, you’ll find NPC’s integral to the story, giving backstory and lore to help your understanding of the game. You’ll also find key NPCs such as a man who explains and gives hints on defeating certain monsters and a lady who will allow you to upgrade the Sukurame’s abilities in a skill tree using ‘Korima’ found in secret, hidden pots or given after defeating enemies. This allows you to tailor your combat to your playstyle, giving you a wide range of choices, whether that means more health, more magic or faster and stronger spears.

After defeating the bosses at the end of each world, you will be bestowed with an ability from that level’s respective demigod. These abilities allow the Sukarame to have more freedom when going back to previous levels to collect previously achievable items. They are also integral to the levels, having specific parts make you think about what ability should be used in that situation, whether it be transforming into a bird to reach previously unreachable ledges or turning into a bear to uncover a path that was once blocked, the game keeps you coming back for more and enticing you to gain that one hundred percent on your profile.

Everything in Mulaka seems seamless, the conversion into combat, puzzles and ability transformation works extremely well. The crafting system is completely seamless, you’ll find plants throughout your adventure, as you harvest these materials, the items you can make will appear on your d-pad. This allows you to stock up on health potions and bombs quickly and efficiently and allow you to focus more on the rest of the game than to grind to stock up on certain items you’ll need. The one downside is that harvesting plants can be frustrating and tedious, as the attack and harvest buttons are exactly the same, you’ll have to come to a complete standstill to harvest, which means walking to the plant, picking it, then moving to one directly next to it, making sure you’re directly on top of it, then harvesting again. Failing will make you swing your spear and it can be incredibly frustrating and clunky-feeling.

Visually speaking, in Mulaka, they are fantastic. The edges are jagged, yet well styled and honestly remind me of the N64 era of graphics. The colour palettes are consisted of warm colours to complement the sandy, sunny mountains of the Sierra Tarahumara; with some worlds even completely changing the palette to cool, dark blue and greys to complement the beautiful night time scenes. The transition from the normal world to the alternate vision world works perfectly, making it seem almost intentional that these two worlds exist beside each other.

For the price it asks, ($19.98) Mulaka is the perfect complement to any Switch collection. Besides the janky combat and sometimes confusing story/NPCs, along with some frequent crashes (which the developers are already seeking to fix), everything about this game succeeds in what it was meant for, with it’s incredibly smooth, satisfying movement and design along with its uniqueness in level design, cultural story and interesting abilities; Mulaka is really worth the pickup, and it’s definitely something you’ll see yourself going back to in order to invest more time into completing the game to its fullest.