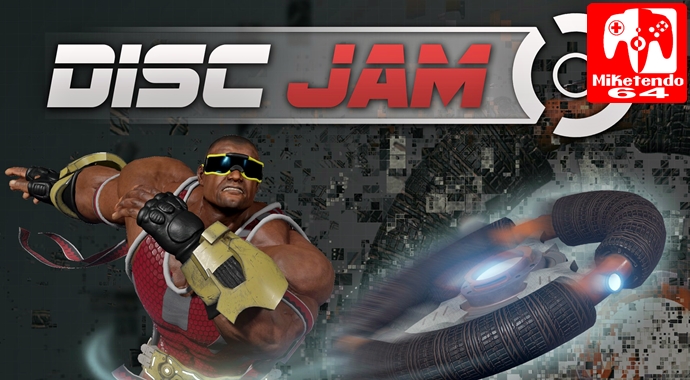 Pump up the Jam and get ready to rumble, Disc Jam is out now on Switch and this particular doughnut has quite the bit of jelly to it!

Disc Jam is a whole lot of fun, it’s a unique action-sports game that places 2-4 players against each other to scramble to retrieve and hurl a glowing frisbee while using combinations of interesting abilities and throws to defend their own end zone. The title is a love letter to games like Pong and Windjammers. It takes elements from a normal frisbee game and twists the rules immensely to create a fast, skill-based experience which fuses experiences like the fast reflexes of Air Hockey with the strategic positioning of Tennis. Disc Jam is an amazingly crafted online experience, which also, in the end, hinders the game, as the player-base just isn’t big enough; and with a lack of game modes and a single player, the game just falls short of being perfect.

Disc Jam is a prime example of easy to pick up, hard to master. It’s a simple idea but punishing and skill-based mechanics make it a fun game to try to learn, and its tutorial does a good job of teaching that. You move around using the analogue stick and you can use a different form of mobility (which changes depending on the character) using Y. When you have the Disc in your hand, you have a multitude of different options depending on the situation. You can throw the Disc by using B, but moving the analogue stick in specific patterns while pressing B allows you to perform different throws that curve and skip along the side of the arena.

Catching and throwing the Disc at the correct time allows you to perform a perfect throw, which is faster and more devastating than usual. Lobs (which are performed with Y when the Disc is held) is mostly used for punishing the position of the opponent; your character throws the disc straight up in the air and it slowly floats down on the opponent’s side of the court, however, if this is done wrong, your opponent has time to charge their super. The super throw is a devastating move that is changed depending on which one you pick before the match; these can be unpredictable and basically allow a free goal unless your opponent is very skilled at prediction. Supers are charged by standing under the Disc for a specific amount of time, which is why it is important to use your shield (default B) to not only deflect the Disc away from the net, but to also bounce the Disc in the air for enough time for you to gain your super.

These mechanics and combos require skill and mastery, and without practice, your opponents will easily outplay you in any ranked game. There’s a lot to learn – which allows for a lot of fun when you finally pin that one trick down in an actual game. There’s a free play mode which allows you to test your skills against a deflective wall so you can properly nail your skills down before entering your ranked matches. Even though there’s a lot of variation between the different super throws and characters to choose from, it becomes clear really fast that the game is unbalanced to a degree; in the higher ranked online matches, you only seem to see the same characters, the all-rounders Makenna and Gator as they are by far the best in terms of slides. Haruka’s improved mobility cannot make up for their awful slide, while Stanton’s raw power can’t counter his lack of speed. The different supers are unbalanced too, you tend to see the right angled super more, as it’s wildly unpredictable and a pain to catch.

The 1v1 and 2v2 game modes may be fun, but other than that, there aren’t any other viable fun game modes. There’s a considerable lack of a fleshed out single-player mode; there’s a Versus AI mode but it just feels boring and rushed. The only other fun you can have with the game is a Couch Co-op Split Screen mode and a Wireless Local Play mode, which while being a welcome addition, just don’t give Disc Jam the extra content and gameplay styles it needs.

Even with these downsides in the game, at the lower ranks (where a beginner will tend to spend most of their time) the game can be a blast, even though you might get some lacklustre games, that feeling when you punish your opponents positioning with a lob or you curve the disc right around their character is so satisfying and rewarding, and keeps you coming back for more to keep honing your skills as you climb through the ranks. Eventually it becomes second-nature to read your opponent and plan their next move, defending into a super throw or volleying the disc just over the net is fantastic fun, and with 100 points to score, with the points to gain from scoring gradually going up as time passes, makes some games, where you’re continuously going back and forth nerve-racking fun.

Disc Jam has a lot of customisation features, not only can you edit your emblem to an unlockable picture and your tagline from phrases like ‘Team Player’ to ‘¯\_(ツ)_/¯’ but there is also deep physical customisation of each character as well as the discs. You can change your skins, taunts and victory poses, as well as what your disc will look like during a match. This, however, isn’t unlocked by simply beating challenges or ‘winning X amount of games’ but instead by a loot box system. You can unlock one piece of customisation for 1000 of the in-game currency, ‘Jamoleons’. These items can come in different rarities, and while don’t directly affect the gameplay, definitely hinder the game from being as challenging and fun as it could be. The developers are active though, and frequently make ‘Double J Weekends’ where the amount of J you earn from games is doubled; and on top of that, you can buy J from the eShop for a price, ~$1 for 4,000 to ~$25 for 130,000.

For what it is, Disc Jam is a fun online experience which utilises it’s fun, skill-based gameplay with its charming graphics and sound to keep any player hooked for a while. The main question is, will it last? Will the community of players keep playing this online-only game or will it fade into irrelevance fast? With cross-play between PC, it’s unlikely, but occasionally you do come across the same players over and over, which isn’t a good sign. With all things said and done, Disc Jam is really worth it as a game that will keep you coming back to hone your skills and have some genuine fast-paced fun on the field.