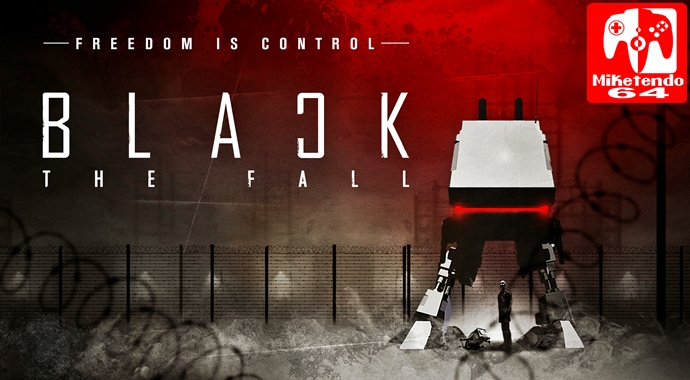 The means to play hide and seek on Switch, has arrived!

Developed by Sand Sailor Studio and published by Square Enix for platforms such as Linux, Microsoft Windows, PlayStation 4, Xbox One, etc., Black the Fall, is a side-scrolling puzzle platformer video game that tells the story of a man named Black. Starting you off in a darkened room, which is where you can first start controlling Black, Black is surrounded by persons who are not his friends and must make good his escape. So with escaping on the agenda, you will of course find yourself incapacitating one of the guards and taking their laser pointer, an effective tool you’ll be required to use throughout the game.

Despite a slow start to the gameplay, game progression is achieved by doing things like jumping on a bike to get a cart moving, just so you can cause it to open a door for you to go through and dodge the traps that are in your wake, but as a game that consists of puzzles, Black the Fall soon escalates its pitch and before you know it, there is no time to take in the Sin City like graphics, because there is a demanding puzzle that requires all of your attention, should you wish to process. That’s not the worst of it though because there are also guards and security cameras that you’ll need to sneak past and sometimes, you’ve actually got to get a little creative with how you do it, or you can suffer their wrath when caught, or try to flee on a bike.

Whatever you decide to do though, always make sure that the red dot is not on you, because the local security is packing and they’re not afraid to open fire. Granted you can respawn when you die, but if you can avoid being shot, then it is in your best interests and if the puzzles themselves are too much for you to bare as they can get very difficult and result in you needing a guide just to look up the correct actions you should take, the further into the game, you will encounter some platforming-like areas where you need to jump from platform to platform and even climb, should you wish to advance. But most of the time you will simply find yourself playing cat-and-mouse because Black the Fall, is a game that is all about sneaking around and mostly trying to distract whoever is in your path.

Due to how difficult the puzzles can be, due to not being as obvious as they could have been to players of lesser puzzle-solving skills, Black the Fall can also become exceedingly frustrating at times and sometimes, it feels like the game knows this fact and relishes in it. So unless you are very patient, or take great delight in the parts of the game where you use a laser pointer to control people, by making them interact with certain objects to rotate them and open up what was once a closed door, be prepared for a rage quit, because you might find yourself quitting once or twice, long before you actually beat Black the Fall, because the only time I found myself enjoying myself, was during the lighter parts of the game, where things were easier, like being outside the complex, where water and grass can be seen, or you being partnered with a mechanic pooch-like robot that you can use to climb up walls and even distract cameras, but between you and where you will meet your new found pal takes some time, due to the pooch being something you don’t encounter until nearer to the end of the game.

The pros of this game, is that it adds some puzzles later on in the game that are really fun to solve, it has a decent amount of platforming, as well as some action elements and is nicely packaged together via the noir-like graphics and a good soundtrack, but there are plenty of cons too. For instance, if you know what you’re doing, Black the Fall is a game that can easily be beaten in less than 2 hours and there’s no real story as such to it because there’s hardly any dialogue as such to narrate it to you, or properly clue you in on everything. Sure you can try piecing it all together yourself, by taking things into account such as the tone of the game and the locations, which all seem to scream a war-like setting, with Black in the enemy’s base/camp, but it would have been nice to have been told this, instead of having to assume it.

Black The Fall does a good job in combining some cool puzzles and action/platforming elements into the game, but it is short lived and upon besting the game, there isn’t actually much in the way of an incentive to make you want to dive right back in and play some more. Furthermore, although it was a struggle for Black the Fall to pull me into its dark expansive world, I do believe it is a must-have title for any and all puzzle enthusiasts with a Switch, but it can be very off-putting to those who aren’t.