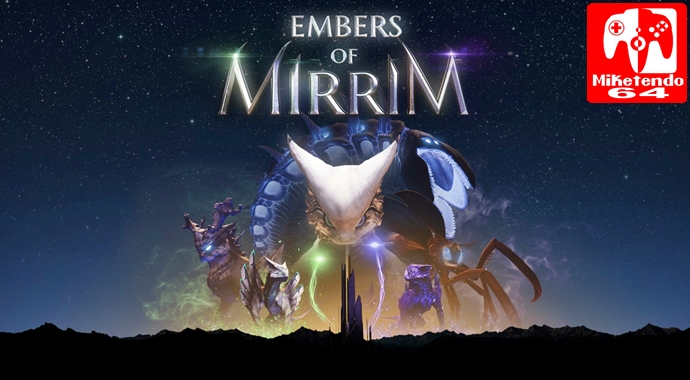 With many fun and challenging platformers landing on the switch since launch, the market may seem saturated. However, with Embers of Mirrim, it combines beautiful graphics and a unique concept to make an enchanting experience for the player.

Embers of Mirrim has you control two elegant cats each with their own magnificent look to them. The game doesn’t immediately start off like this, at the beginning, you gradually build up your abilities and learn the basic controls. The game adds these in periodically with thoughtful implementation so you are fully aware of what you are doing. The dualistic approach towards these characters adds a sense of light and dark and the shifting between good and evil which is mimicked in the lighting and environment. I really appreciated the clear direction of the silent animated cut-scenes, even though they don’t have voice actors to describe what is happening, the use of pathetic fallacy is great.

The gameplay is fun and satisfying as it ties challenging concepts with superb traversing of platforms. It incorporates 3D elements to add to the platforming and make it even more exciting. I thought this really worked in this instance and the 3D art looked beautiful. Because you can control two cats at once it can get quite tricky and confusing so the game can be challenging at times. You won’t always be controlling the two cats as most of the time you just play as a single cat. You normally use this function to jump up to platforms or merge though the designated colour objects that correspond to the two cats. For example, when you separate you can fly for a brief period, but to sustain your momentum in the air you need to go through these diamond-like flying objects or through a mesh of lines.

When flying separately you will quickly find out you have limits so you have to plan out your route to make sure you don’t reset and go back to the start of the puzzle. I really liked the falling logs that each entailed a surprising layout of puzzles and challenges to pass. If you weren’t fast enough you would be squished and if you couldn’t separate quick enough and complete the puzzle you’ll be reset. This is where the environment adds to full experience and the animated backgrounds make your play through that little bit more engaging.

The controls are really tight and need to be as it would be infuriating in many parts of the games. They are really quick and responsive and aren’t confusing as I thought it would’ve been if you were able to control two playable characters simultaneously. The two characters were initially named Mir and Rim but then the spirit comes and combines them to make one singular, yet more powerful cat-like character. As I stated before the environment adds a lot to the game and Mirrim reacts with the wildlife, a key example are the lily pads that are scattered about the levels to reach higher points. These Lily pads fall after a few seconds so you have to make your move fast. Another great example of how great Mirrim reacts with the environment are these objects that either make you bounce on them or creating a platform for you to extend your jump. I found these objects very useful, especially the bouncing one as it gives you another option to complete a section. Both of these helpful objects correspond to each of the combined cat types as well.

The game’s pace never slows down leaving you little time to rest and think about your next approach to the challenge ahead. I loved building up momentum on the vast runways to then extend your jump across the void below. The game makes you feel powerful at these points and gives you a thrilling experience. You won’t get bored as all the zones have a unique theme to them and each wrap up with a boss fight.

Overall Embers of Mirrim is a delightful platformer and a great fit for the Nintendo Switch. With sizeable fully animated cut-scenes and a hard difficulty level, you will have a blast completing the game but you’ll probably not want to go straight into a second play through as the replay ability is quite low due to the linear sort of game it is.