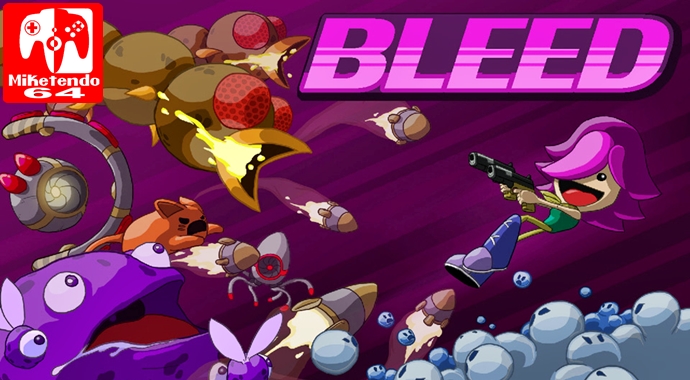 Is its best bleeding good enough?

Made with LK Engine 4 and developed by BOOTDISK REVOLUTION, the action focused platformer called Bleed, first made its debut as part of Xbox Live Indie Games, on the 12th of December, 2012 before hitting Steam in 2013. But fast forward 5 years and a handful of days from its initial release and Bleed has finally Switched up and depending on your individual perspective, it’s either a welcome addition to the ever growing Switch library, or something you can do with out for Bleed,  is not the meatiest of meat sandwiches!

It’s not all the too look at the graphics aren’t as polished as they could have been and the game itself is exceedingly short since its main campaign is comprised of 7 levels that can be beaten within an hour depending on your skill. However, like with any run and gun type of platformers, where it shines is how it plays, not how it looks, so in terms of how it handles, Bleed is a bleeding charge. The running is smooth, the triple jumps that are a combination of the ZR button and left analog stick being pushed in the direction you wish to venture in, aren’t as cumbersome as you’d think they’d be and shooting is an absolute dream that only requires you to twiddle the right analog stick in the direction of whomever you wish to blast to smithereens. But, just in case you need to really make sure they’re dead, you can always hold the ZL button to trigger Bullet-Time. It may only be a temporary thing, but if you make the most of it, even the biggest and baddest of bosses shall fall.

As for the protagonist of Bleed, enter Wryn, a girl who lives in the year 21xx, a full century after a time where Heroes were loved, with the very best being “immortalised in a shrine dubbed the Hall of Heroes.” In the 100 years that passed, none had been inducted but there is own who believes himself worthy of being the next greatest Hero and swipe the slate clean. Clearly Wryn is not the he who wishes to be the next hero, but she is the purple haired players can expect to play as, when they play through her journey of taking out the last 6 years and then doing battle with the one known as The Rival, after he lays claim to all her achievements.

Naturally, the 7 playable levels, made up of a few different sections so that in the event of your death, you can respawn at the last area/checkpoint you want, but for what it’s worth, there are 3 other characters you have to play as. Granted the other 3 characters have requirements to unlock them like The Rival requiring you to beat Story mode on Very Hard. White MK I requires you to beat Story mode on Hard difficulty and Robo-Wryn can be unlocked via beating Story on Normal, or beating Arcade mode on easy. (Arcade mode is exactly the same as the Story Mode, except this time around you only have the one life, so when you die in Arcade mode, its game over, but like stated already for Story Mode, the lives are unlimited, so death is just a delay instead of the end.)

If you want to get technical though, there are more characters available to play as, but only if you’re the Player 2, as Bleed fully supports co-op play, but throws the second player into the shoes of a colour variant character. One example will be when Player 1 is a pink-haired Wryn, Player 2 will be a red-haired Wryn, could when armed with dual pistols is almost as hard as nails as FemShep is. (Female Commander Shepard from the Mass Effect trilogy.)

Now, although Bleed is a game that can be played all by yourself, I did find that it works much better as a game shared with a friend, especially when even on the Normal difficulty, it can feel anything but easy, especially when you’re still playing through the same scenario 20 minutes later after first reaching it. Plus, not only do they make it easy and come in handy when battling the Bosses, as they can wield the casual weapon like Dual Pistols, or the Revolver and draw the boss’ attention, while the other player presses L or R, to swap out to the Rocket Launcher and deal the massive damage. A joint take-down can see players die less, earn more points and cash so that they can then visit the shop inbetween levels and buy new weapons and upgrades like more health, a flamethrower and a katana! (Yes, there’s a katana and it’s pretty sweet.)

Other than that, there really isn’t all that much to Story mode as it is a very small and simple affair, but should you prove yourself able to unlock the other characters, they themselves can add some variety to the game due to the different playstyles each character has, but that’s only going to sustain you for so long because although there is a tediously difficult Arcade mode and a Challenge Mode that causes you to fight multiple bosses at once, that is the full extent of what Bleed has to offer. So on that note, this is as good a time as any to move on to the Conclusion.

Without a doubt, Bleed is a mixed bag. Graphically and musically it’s okay, but it plays great. It’s short with very little to do, but a lot of fun. It’s also a very smooth port with flawless and engaging action, but the game’s asking price is just asking too much. At $14.99, it’s hard to justify buying Bleed when there are plenty of other games that have a whole lot more to do and are available for the same price, if not lower, so unless Bleed is already a must-buy for you as you’ve played it before, or you see it available at a reduced price due to a sale in the future, good addition to the Switch library or not, you would be wise to give it a miss in favour of something better.