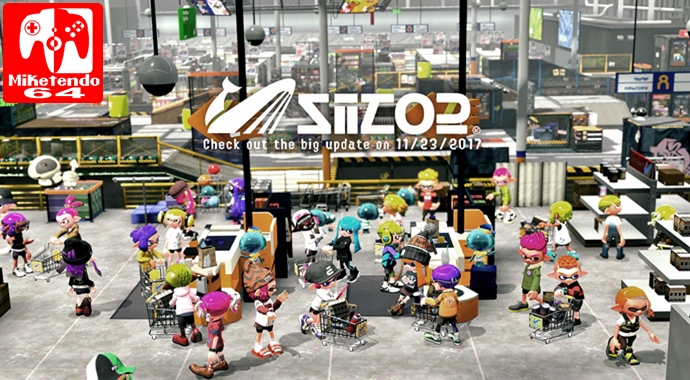 If you are reading this, take everything that you know about Splatoon 2, put it in a teeny, tiny box and throw it into the ocean, for the inkling world will never be the same again.

When Splatoon 2 was first revealed, although it did have some differences, it didn’t seem like that much of a sequel, as it did feel and look more like an enhanced port. In the lead up to its release though, more information was shared and true enough, Splatoon 2 did seem as though that it really would be a game in its own right and a true sequel and now Nintendo have decided the time has come to truly show off Splatoon 2 as the sequel it was always intended to be.

As part of a new video that was posted today, which outlines a whole range of new content planned for Splatoon 2 via updates, nearly 140 pieces of gear was revealed, (some from Splatoon 1, with the rest being entirely new,) new hair styles that are out on November 23rd and even some new and old stages to do battle on, but even then that’s not all! So here we go again with another one of our Digest articles and this time once we’re done posting the video in which all of today’s information comes from, we’re sharing the official press release for it all:

REDMOND, Wash., Nov. 21, 2017 – Nintendo continues to roll out additional content for the Splatoon 2 game for the Nintendo Switch system, and is now releasing two free software updates with a ton of new content and a new way to play. The first free update hits on Nov. 23 and adds a new stage for Salmon Run, new gear and new hairstyles for Inklings, as well as many other features, with additional new battle stages rolling out beginning Nov. 24. The second free update will be available mid-December and introduces a frantic new Ranked Battle mode called Clam Blitz, which involves picking up clams around the stage and trying to throw them into your opponent’s basket.

“These free new additions to Splatoon 2 deliver surprises to fans to keep the fun going,” said Doug Bowser, Nintendo of America’s Senior Vice President of Sales and Marketing. “This new content significantly expands the game and provides a great value for players, regardless of whether they purchased it on launch day or have it on their holiday gift lists.”

Splatoon 2 is now available in stores, for digital purchase on the official website or in Nintendo eShop on Nintendo Switch at a suggested retail price of $59.99. The upcoming software updates are both free and can be downloaded starting on Nov. 23 and in mid-December. For more information about the game, visit http://splatoon.nintendo.com/.

And since Seafoam Shanty, the Bottom Feeders did come up, here’s what has been said about them via the Squid Research Lab and a whole bunch of screenshots we’ve put into a slideshow gallery for you:

A new band called the Bottom Feeders has been tearing up the Inkopolis charts lately. The band is fronted by a tropical-betta-fish violinist, features vocals by a dude made of seaweed, and also includes a shark, a scallop, and a globefish. Their unforgiving yet catchy music style is the product of fusing ancient Celtic sea shanties with punk rock.

In addition to the song featured in the trailer, Seafoam Shanty, the Bottom Feeders will be providing two additional tracks as battle music. Take a listen to Fins & Fiddles and Shipwreckin’!

We hope you found our Splatoon 2 Digest that covers all of today’s Splatoon 2 news helpful!