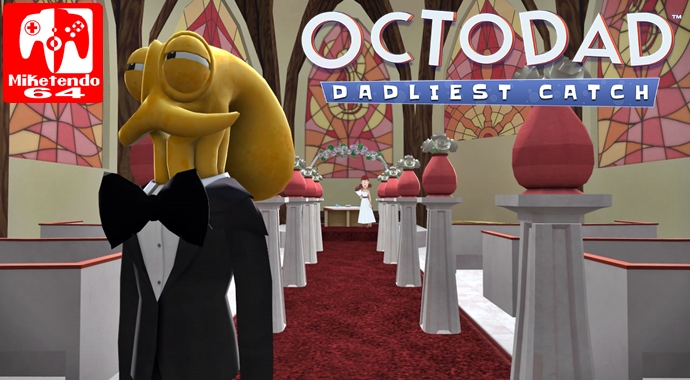 Move over Inklings, you’re not the only playable cephaloprotagonists on Nintendo Switch anymore as Octodad: Dadliest Catch will be available from the Switch eShop in just a manner of days!

Personally, I was completely overjoyed with this news as I actually missed out on Octodad: Deadliest Catch when it came out on the Wii U back in 2015, so the second I was sent the email regarding a review key, let’s just say I jumped right into the action whole-heartedly. But there is something you do need to know if you don’t already and that is, if like me the first time you saw Octodad was way back in 2010, it immediately became a game I just had to play, only I never actually got round to it, only Octodad: Dadliest Catch is not the game that I first laid eyes on. Why not? Because Dadliest Catch is a sequel silly, be it an old sequel as it has been out for quite some time and has come to many platforms over the years, but it is still a very enjoyable game nonetheless.

So what’s it about? Well if the title isn’t a total giveaway, Octodad: Dadliest Catch, just like its prequel, is a game that follows the story of an octopus posing as a human and has a human family. There’s his wife Scarlet, his son Tommy and his daughter Stacy, who by the way is the only one who knows Octodad is an octopus. (You’d think it would be totally obvious, but turns out that Octodad is actually very good at concealing his eight tentacle having secret.)

As a seemingly normal guy, Octodad does all the usual things, he has his cup of coffee in the morning, he tends to his garden and even goes grocery shopping to pick up… yup you guess it, groceries. Only because he is an octopus, how he does them is anything but normal as even the simplest things can result in mayhem, chaos and destruction. As a character that can allow a single player to control both his legs and one arm, or by two characters controlling one arm and one leg each, let’s just say Octodad is no stranger to stumbling about all over the place and then some!

The best way to describe his movements, is if you, a friend, or someone that you know, got so trashed on cheap booze on a Saturday night out/at a Christmas party/high school reunion and got so smashed they’re off their trolley that when its closing time/time to make a move, the best they could possibly muster is a drunken stumbling in every direction except for the one you/they, actually desire to go into. Well that drunken stagger is what Octodad and the player/players must deal with and it does not make things easy, as even climbing a simple ladder, or travelling in a certain direction along a straight path, can have you falling over all over the place, knocking everything in your path over. Still it is a whole lot of fun and even if the controls themselves feel bad, they’re not, because they’re just doing exactly what they were meant to, which really is all part of the fun.

Size-wise, Octodad: Dadliest Catch really isn’t all that as it can easily be completed within 3 hours, but for those 3 hours a wonderful journey awaits. We’re talking a trip to the aquarium, where Octodad needs to do some midnight dancing. We’re talking Octodad dressing up in a shark costume to avoid Marine Biologists who “know a FISH when they see one.” Experience a flashback scene that explains how Scarlet and Octodad met in the first place and why the Chef who pursues Octodad all throughout Dadliest Catch, hates him so much.

There’s also a fiery showdown, an airing of old secrets, a whole bunch of ties to collect and even an interactive credits scene, at the end of Octodad: Dadliest Catch, where Octodad can muck about in a movie theatre as the game’s credits roll on the big screen. Other than all of the above and achievements, there’s not much in the way of main game content, but there is additional content in the form of Shorts, which became available to earlier releases of Octodad: Dadliest Catch as DLC. As for what they entail, well, they’re just more of the same. More brilliant Octodad action with one Short focusing on his and Scarlet’s first date, whilst having to slip away to work in the kitchen and serve his fellow diners.

There’s also more ties to collect and as for his other shift, well Octodad replaces working at a restaurant with working as a nurse for a hospital and that’s when things get really weird. Sure they’re weird already because it’s a game about an octopus that can wear clothes, as part of his efforts of blending in, there’s a human in desperate need of an operation to fix his broken heart, only the human is actually a robot and that’s not the craziest thing that could possibly happen. But while Octodad: Dadliest Catch is a short game, it’s got plenty of replay value and it may not stand the test of time for all of eternity, but right now it is still as good as it was on the day it initially released on the 30th of January, 2014!

If you are looking for a loveable game, with a lovable protagonist that has a different way to play when playing alone or with someone else, Octodad: Dadliest Catch is as good a game as any. It is brilliant, it still holds up and it is one heck of a lovable indie that is just too good to pass up!