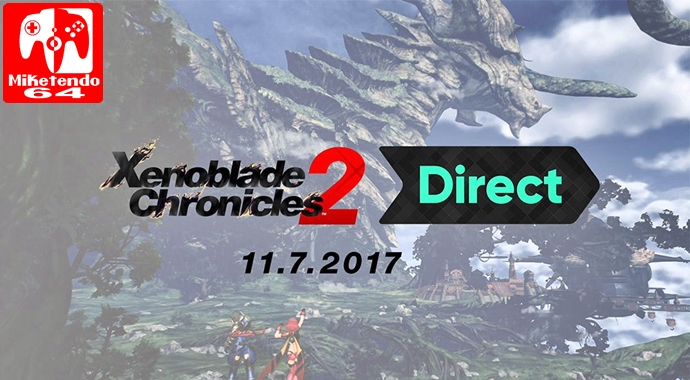 A Complete Xenoblade Chronicles 2 Nintendo Direct Digest (All the News, Tweets, Photos & Videos in One Place!)

I’m just going to come right out and say it, I have never been one for the Xenoblade Chronicles game. I just couldn’t get on with them at all, but then 2 showed its face!

Xenoblade Chronicles is gorgeous, it’s breath-taking and going by everything that was shown in the most recent Nintendo Direct, it is going to be one of the most top contender videogames for the Holiday season because it really is downright incredible. So incredible in fact that a plethora of news was divulged that if we were to dedicate an article to each and everything thing and cover them in their entirety, it could take us 2 hours. Instead we’re doing one single article that covers everything, so if you’re just here for photos, we’ve got lots of them. If you’re hear for news, we’ve got that in abundance and we’ve even got videos!

Talking of videos though, for anyone who does prefer to watch as opposed to read, below you will find 2 videos, with one being a character trailer and the other being a video of the entire Direct, which actually incorporates the character trailer as part of it:

And now from here, we have both a slideshow gallery of characters, followed by an official recap press release by Nintendo of America and then a series of game related tweets:

Nintendo Spotlights Xenoblade Chronicles 2 Before its Launch on Dec. 1:

REDMOND, Wash., Nov. 7, 2017 – I n just a few weeks, Nintendo Switch owners will leave the familiar behind and enter the fantastical world of Alrest – a world full of living lands known as Titans and the fabled paradise of Elysium. To get fans ready for the Dec. 1 launch of the Xenoblade Chronicles 2 game, Nintendo presented a deep dive into elements of the massive game, including the vast environments, battle system and characters. This special Nintendo Direct presentation also revealed upcoming paid DLC, a fun cross-promotion with The Legend of Zelda: Breath of the Wild, as well as free DLC available to download on launch day that will allow players to also play the game with Japanese audio and English subtitles.

“With Xenoblade Chronicles 2, we are giving fans yet another engaging adventure that can only be found on Nintendo Switch,” said Doug Bowser, Nintendo of America’s Senior Vice President of Sales and Marketing. “This sequel is perfect for playing at home or while traveling during the busy holiday season.”

Xenoblade Chronicles 2 is next in the series following the original acclaimed RPG that launched for Wii in 2012. This sequel features new characters and worlds, with an expanded battle system that will still feel familiar to fans of the first game. In Xenoblade Chronicles 2, Blades are artificial lifeforms that bond with Drivers to lend them their weapons and powers in battle. Main character Rex is a Driver and Pyra is a Blade. To help familiarize fans with main character Rex before the game launches, a new Side Quest will be available via a free update in The Legend of Zelda: Breath of the Wild game for both Nintendo Switch and Wii U systems, in which players will be able to obtain a Rex costume starting on Nov. 9.

In and out of battle, Blades have a wide array of support abilities. While adventuring, these abilities might increase the number of items that can be collected, open up new paths to explore or initiate other special effects. When players fight alongside their chosen Blade, they might trigger effects that protect the Driver, strengthen attacks and so forth. Abilities differ from Blade to Blade, so selecting different Blades adds to the strategy of battle.

Blades are just one form of life that players will encounter while journeying on the backs of the mighty Titans. In the vast world of Alrest, players will discover both peaceful and aggressive wildlife of all shapes and sizes wandering among giant plains, winding caverns, frozen kingdoms, scorched earth and sandy beaches. If players manage to defeat certain Unique Beasts, a tombstone will be left behind to commemorate the creature and allow players to relive those battles for additional rewards.

While traveling the massive world of Alrest, players will run into shining spots called Collection Points – which give players the opportunity to pick up valuable items or dive under the clouds to salvage hard-to-find treasures – or special landmarks that players can transport to at any time. Alrest is also teeming with bustling cities. From shopping districts to residential quarters, each Titan has its own unique layout and atmosphere.

Fans who want to expand their epic adventure can pre-purchase an Expansion Pass for the game in Nintendo eShop beginning today or pre-order it from select retailers shortly at a suggested retail price of $29.99. With this pass, players can enjoy DLC as it releases between the launch of the game and fall 2018, starting with quests and support items, and eventually including a challenge Battle Mode where they can face powerful enemies. This DLC will even include an additional adventure with a new side story set in the world of Elysium. Details about individual elements of the Expansion Pass will be released in the future.

A Japanese voiceover option for #XenobladeChronicles2 will be available as free DLC on launch day, 12/1. pic.twitter.com/c94rCrBmBz

Blades are artificial lifeforms that bond with Drivers like Rex. These living weapons boost Drivers’ power in battle. #XenobladeChronicles2 pic.twitter.com/lS9C4rsczP

Alrest is filled with wild creatures. Defeat a powerful beast and a tombstone will be left to commemorate it. #XenobladeChronicles2 pic.twitter.com/mR3B47SmS7

As Blades and Drivers spend time together, new, more powerful abilities will be unlocked! #XenobladeChronicles2 pic.twitter.com/MrEordtUkJ

The artificial Blade Poppi can be upgraded with special parts to change attacks and abilities. She’s one of a kind! #XenobladeChronicles2 pic.twitter.com/7oNbGBzRLx

Mastering the different types of combos in #XenobladeChronicles2 is the difference between a good Driver and a great Driver! pic.twitter.com/BN5H06XvGS

The #XenobladeChronicles2 Expansion Pass will include new content from the game’s launch, all the way until fall 2018! pic.twitter.com/rHzKJbqGAS

Looking to salvage in style? A new Rex costume comes to The Legend of Zelda: Breath of the Wild on 11/9! #XenobladeChronicles2 pic.twitter.com/lF47jquIyg

Lastly, we have another batch of images for you to go through, which we have separated into another two slideshows as the first concerns Illustrations and the other is Screenshots, enjoy: