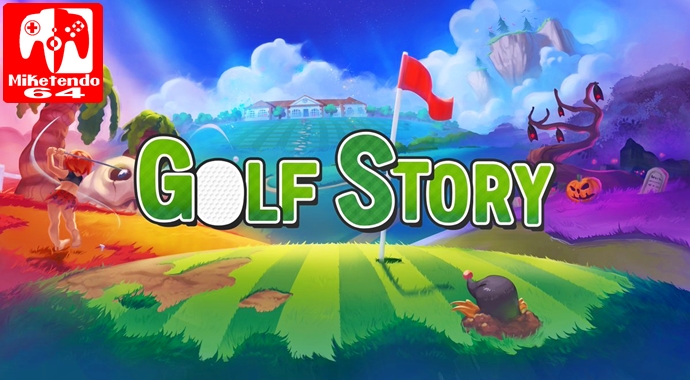 When it comes to the RPG genre, you can get your standard with the standard story, an epic game with an epic story like any of the Final Fantasy games and then you get the bizarre ones that just work and Golf Story is most definitely the latter!

Exclusively released on the Nintendo Switch and once in development for the Wii U back when it was a much smaller game, Sidebar Games’ Golf Story is without a doubt an RPG with a difference as not only does it have a Golf theme like it’s title suggests, but it really goes into the whole Golf scene in ways I will get into later. For now though, let’s just stick with Golf Story’s premise and story, because while I too can get into the whole “Golf Story is Mario Golf meets EarthBound,” enough has been said about that already.

Instead we’re just going to brush that fact to one side and keep this review going, so in a move that was expected due to its title, all manner of combat as we know it in your typical RPG have been done away to make Golf Story more of a traditional kind of role-playing game. As for the story, Golf Story revolves around a single character, who once upon a time was but a young boy whose father took him out to play gold one day and 20 years later that boy has grown up into a down on his luck golfer.

With a desire to change his lot in life and relight his love for golfing and to become a Professional in the process. So with no other way about it, the unsung protagonist goes back to where it all began 20 years ago and endeavours to set his plan in motion, unless the world of golfing can be a cruel one. There are scrupulous characters, golfers who are out for themselves and a Coach who refuses to teach you, even after you’ve beaten his three students. Oh and the protagonist is also like the only sane person in the game as some golfers are straight up nutters.

But hey, if it was easy, going Pro wouldn’t be worth doing, so bring on the hardships! Bring on the 8 worlds/areas that are full of NPCs, hidden items, challenges and a 9-hole Golf course exclusive to each area and embrace all that is Golf, includes the off-shoots that are also available like mini-golf, disc golf, driving ranges, lawn bowling and even a golf game video game that is Atari-like in nature.

If I’m honest, the plot is just downright laughable and at first listen/first read, could be considered as one reason to skip the game, which by the way has a map that reveals the world of Golf Story to be the same shape as Australia, but Golf Story does have some great writing behind it, even if it is all very dry and unappealing to some who read it and as for the gameplay, NES Golf is back baby! Golf Story uses the gold old “3-button press” system, which consists of one press to start your meter, another press to set your distance and a third to fine tune your accuracy and with the likes of a Precision Metre which comes into effect in the first area, there are plenty of precision shots to be made. Only because this is a video game with golf close to its heart, even if you hit the ball perfectly, you can still miss the mark if you failed to factor in wind direction, wind strength and even obstacles. So before swinging, plan the shot and then shoot the plan.

Even if you do take everything into consideration though, there is still every chance your Perfect Shot will fail to hit the green because being an RPG game, sheer skill is not enough to see you through as you stats such as Power, Purity, Strike, Ability and Spin will need to be boosted, the player will need to level up and better clubs will need to be obtained and quality gear does not come cheap! The good news though, is money can be earned by doing various challenges that will have you tee up all over the map and do things like hitting a ball into a specific spot a number of times, proving your mettle as a golfer and so much more as the challenges go from being normal to absolutely bizarre and I’m okay with that.

Just like I am okay with teeing up wherever I want and attempting to sink my balls into whatever switch I can find to open up a new area where rewards and further challenges await, but aside from all that and some enjoyable hours of gaming pleasure, and some low-jazz tunage that is unmemorable, yet compliments the 16-bit graphics at play, at the end of the day, Golf Story is just a 9-hole game as opposed to a full-fledged 18-hole game. (It is a sizable RPG, but not full scale massive, which isn’t a bad thing, but it is something everyone deserves to know going into the game, as it is something you can finish within 14-20 hours, so if you were hoping from more of this RPG, than think again because that 14-20 hours is your lot!)

Outside of the main story though, there is one other feature about the game worth going into and that is Quick Play, which is a mode that allows you and a friend to play Golf Story together, but without the whole RPG vibe to Golf Story and a removal of the story. Just don’t go expecting to be able to play every course right off the bat though as they will need to be unlocked, which can only be done so via progressing through the main game and to save you from asking, split Joy-Con play is supported. Interestingly enough though, while the two player mode at play is somewhat small in nature, it was once planned to have a split-screen two player story mode in which two players would be able to roam freely and set forth upon a mini-adventure, only the mode would have required a lot of work and was instead cut. It’s a shame really, as it would have been cool to see how it played out, but hey, maybe there will be a Golf Story 2 and 2 player will be fully implemented. (We can all dream right?) And now that I’ve said my piece, it’s time to air my final say!

Never in a million years, would I ever expect to utter these words, but here goes, “there are good golf video games in this world after all” and Golf Story is the best of the best. Yes, I detest the premise of Golf Story, but the whole affair is presented in such a way that it is beautiful, funny, well-written and an absolute gem of an indie title. So if you haven’t got it already, the only question one could possibly ask is “why haven’t you?” Golf Story is a game that deserves to be owned because it will be enjoyed greatly, but only if you to give it the chance to knock your socks off!