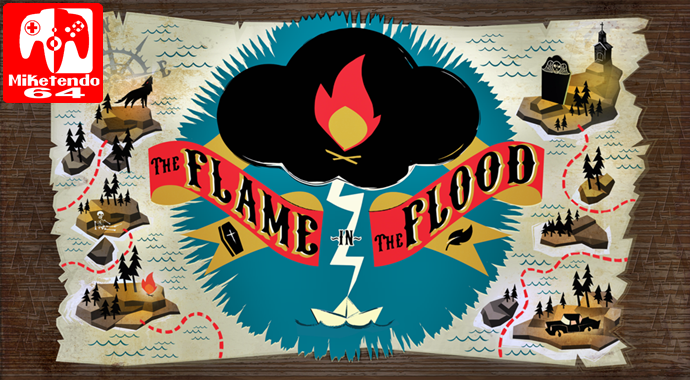 [Review] The Flame in the Flood: Complete Edition (Nintendo Switch)

I’ll be honest here – the simple act of “surviving” in a video game does not excite me. As a human being, I already have to maintain my nutrition, thirst, temperature, and sleep every day, so if you’re going to make me do it in a video game too there had better be something else to it. Other survival-based games, such as Minecraft or Breath of the Wild, do this by offering a variety of things to do beyond merely existing.

The Flame in the Flood… doesn’t.

In The Flame in the Flood you play as Scout, one of the few survivors in a post-apocalyptic world who seeks to make it as far as she can down an expansive river with a mysterious dog alongside her. I won’t say anything more than that about the premise as I wouldn’t want to spoil one of the only interesting things about this game for anyone who decides to take a chance on it. Instead I’ll merely focus on the gameplay: put simply, The Flame in the Flood is a game about picking up items and sorting them. I’m not trying to be cute and reductive for the sake of making a point here either, this is literally all you do. You enter a new area, scrounge around for some random junk, open your menus to turn it into other stuff, use that stuff to replenish your various food/water/heat meters if need be, and finally go to another area to do the same thing all over again. Sometimes you’ll come across a dangerous wolf or boar who can absolutely wreck you if you’re not careful, but killing them is as easy as letting loose with an arrow or laying down a trap, at which point they become yet another item for you to hoard. The closest the game ever gets to mixing things up is when you get to steer your poorly-controlled raft while traveling from one island to the next.

Let’s tackle the biggest problem first: INVENTORY MANAGEMENT IS NOT FUN. (And before any Resident Evil fans start coming after me, I’ll admit that playing Tetris with your shotguns and herbs is kind of cool – but it’s still not as cool as the freedom of not having to worry about what you’re carrying at all.) The Flame in the Flood disagrees and is eager to make you rummage through your rucksack every 30 seconds while shuffling your items between you, your dog, and your raft. I’m not kidding when I say you spend about half the game doing this crap. They don’t even bother to make it easy for you by doing simple things like allowing the dog to pick up more of things that it’s already holding without forcing you to clear a space in your own inventory first. But don’t worry folks – there’s a way to increase your personal space to reduce the amount of time spent menu surfing! It’s really simple. All you have to do is find some cat tails to make braided cord, use the braided cord with some saplings to make a snare, put the snare near some wild rabbits, chase the rabbit into the snare so you can skin it for its pelt, do the entire process again to get a second pelt, and finally use the rabbit skins with a sewing kit to make a pouch! All to increase your item limit by… 4.

Secondly, the roguelike elements feel extremely ill-advised. This “rogue-lite” fever seems to have hit a lot of indie developers in recent years, and as a lover of the original dungeon-crawling roguelikes I feel like the essence of the genre has been diluted somewhat. The idea was to create an experience that utilized randomness to create the illusion of endless replayability. As such, the best roguelikes are those that offer a significantly different experience each time you play based on what random elements occur. For example, games like Spelunky and The Binding of Isaac rely on their numerous items to keep players engaged, with new paths and strategies available in each playthrough based on what the player has been smart enough (or lucky enough) to pick up.

When you die in The Flame in the Flood and are forced to start over (or begin at a checkpoint when playing on the easier difficulty), you will quickly discover that nothing has really changed on your second try. Sure, you may find some rags instead of saplings early on, or choose to collect rain as you go instead of attempting to purify standing water, but none of it really makes a difference. You’re still stuck doing everything in roughly the same order and in roughly the same way. To go back to the Minecraft comparison, consider how many ways there are to play that game from the beginning. After you’ve done your 5 minutes of tree-punching and basic crafting, the entire game is opened up to you. One player might immediately go off to make a shelter, another may forgo safety in favor of fighting mobs, others still may find solace digging underground. There are tons of ways to play, which is the whole point of roguelike randomization and permadeath. Without that, all you’ve done is rob your game of tightly-crafted encounters and level design.

If this game has any redeeming factor, it’s that it looks and sounds nice. Though the character designs are intentionally a bit ugly, they’re modeled in an appealingly low-poly style that contrasts nicely with the earthy environments they inhabit, giving off a Psychonauts-meets-Coraline kind of vibe. Composer Chuck Ragan’s folksy guitar melodies lend a soulful element to the game, and although hearing actual lyrics kick in every now and then can be a bit jarring, it’s easily forgiven when they sound so good. Perhaps most intriguing is the optional Valve-style audio commentary that offers developer insight while you play. I might not like what the game has to offer, but being able to hear the thinking behind every design choice is always a treat.

The Flame in the Flood has great music and art direction, but they’re not worth suffering through the mind-numbing collectathon gameplay to experience. If you absolutely love survival and crafting in a grim and atmospheric world then maybe give this a look – everyone else should let this flame burn out.