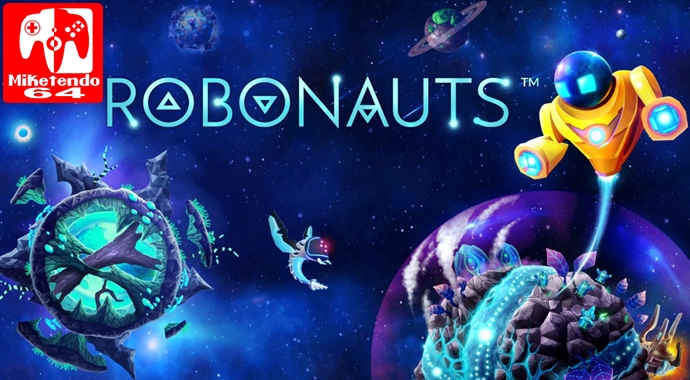 If you’re looking for a space based game that you can play alone or with a friend, then do I have some good news for you, as Robonauts is out now on Switch and it is one of the better three games to have released this month so far!

Being a game about a robot that during an opening CGI movie, is blasted into space, Robonauts is a game that brings platformer styled galactic battles to the palm of your hand, or to your TV as the Switch version of Robonauts can of course be played in every mode going, but while it can be played alone, it can also be a game that can be shared with a friend thanks to two modes that are focused around local play. The first is cooperation, which is the game’s main campaign, but it can now be played cooperatively, while players able to change the colour and design of their Robo, but there is also Hunting Grounds.

With Hunting Grounds, players are forced to go head to head in a bid to score more points than the other, whilst meeting certain goals on any of the new playable levels and although it is an enjoyable feature, I’ve got to say, if I’m going to play Robonauts with a friend, than that friend and I are doing co-op of the main campaign.

While the first couple of stages are relatively simple to do when playing through casual, things soon go from bad to worse the moment you reach the 5 stage of this planetary game where robots in suits of armour and jump from one planet to another, provided they are in close proximity to one another. It’s one thing to be dealing with weird alien creatures and having to shoot them with whatever gun you happen to be wielding at the time, as there are a few available via power-ups, only each one lasts for as long as it has ammo, because once you’re empty, you’re forced to return to your default weaponry, and this applies to your secondary weapon as well, but it is another thing entirely when those weird aliens completely inundate you.

Robonauts is the kind of game where you can be doing great one minutes and then horrifically meet your end in the next as enemies can complete swarm you if you have failed to take out the nests that spawn them and even if you are able to survive long enough, it’s the Rampers you’ve really got to look out for. Those beauties have a face only a mother could love and if left alive, can deplete your life bar quicker than some people can down a tequila short. They are diabolical monstrosities that need to be taken out the second you see them and while that might be an easy task if players were able to use the right stick and aim themselves, you can’t.

Robonauts has an auto-aim system in place and your bullets/blasts can only go so far as each weapon has a limited range, so unless you’re packing something goof, like homing explosives that can lay down the pain, you best be prepared to run whenever you see a Ramper because if you don’t and you fail to kill it, you can be sure you will be forced to replay the level all over again. Not that there is nothing wrong with dying as it means you can enjoy the stunning visuals on each level as Robonauts is a visually stunning piece of work for an indie game and the music composed by Simon Vilund is pretty great too, even if a couple of times it doesn’t match the pace and tone of what is going on. But having to repeat the same level can soon grow tedious, like the fact it took me 6 attempts to beat Stage 7 and 9 attempts to beat the final levels.

Make no mistake though, as nice as a game Robonauts is even without its Mario Galaxy like feel to it, while it will appeal to a lot of players, there will be those who flat-out hate it. With the main campaign only being 12 levels long and a simple story that feels partly forced in as an afterthought, even with the achievements there are those out there who will deem Robonauts a very small game as it lacks plenty of content that could make it better. Content like an online leaderboard so that when you set a record on a level for both level completion time and the score you attained in it, it can be shared there. Content, such as a New Game+ that isn’t Cooperation Mode or even more of a multiplayer aspect, but personally I don’t need any of that.

I think Robonauts is pretty good as it is, but if the devs ever make a sequel, they consider things like the Bloobs that can refill your life come in various sizes and don’t vanish as quickly as they do. Same with the weapons, I wish they’d stick around a little longer too, because the way they currently work, it’s not that good. If you pick up another primary weapon, it will swap out the one you have, and there is no swapping back to it and when another one drops, you are then forced to either use what you have in a hurry before getting the new item, or watching the new weapon vanish, just so you can hold on to the new weapon until you use that up within 8-14 seconds. I think it would be much better if the weapons could be kept, with ammo collected for them, but then if that were possible, the game would of course be easier, much like it would be if players were able to aim for themselves, Robonauts is what it is and I rather like it. Just like how I like the Tactic View gimmick that allows players to view an entire system and see what’s where, especially enemies!

It is not an outright perfect game as there is certainly a few things about Robonauts that will antagonise players no doubt, but there can be no denying how good of a game it is and sure it may be “short” because it’s main campaign only consists of 12 levels, but it left me wanting more and hungry for a sequel, for Robonauts is the kind of game that has that effect on people thanks to its immersive yet occasional infuriating gameplay and charming visuals. So with that thought in mind, hands down Robonauts is a must own title for anyone on Switch who have a penchant for galactic endeavours and robots.