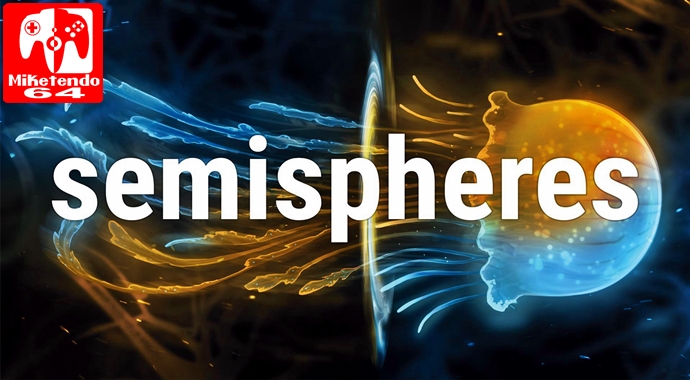 If for some reason you are a Switch owner who feels as if they could do with some more orange and blue in your video gaming life, then be prepared to pound the sky as the award winning game centred around a brain, with neural mesh background known as Semispheres, is available now on Nintendo Switch!

Having already released on PlayStation 4 and Steam, with an Xbox One still on the cards, the “meditative parallel puzzle game that places dual realities at the heart of its challenge,” Semispheres is a game that is bound to divide all who are daring enough to try it. Why? Because Semispheres is marmite and players will either play it once and walk away, or play it until they’ve finished it and then walk away and that’s not necessarily a bad thing.

Just know though that in addition to a story about a boy and the robot he receives one day that plays out in various interviews, in between worlds, this is a puzzle game that will require you to think like a chess master and like an idiot. While some puzzles are terribly difficult to figure out on your own, some are so simple that the answer is right in your face and if you’re over thinking things, it could be a while before you realise that the puzzle can easily be solved by moving your orange Jellyfish looking neuron into the beacon of light and then stroll over to the goal.

Control-wise, there’s really not all that much in the way of controls to remember, as the only buttons you’ll actually use is the L and R shoulder buttons and the twin sticks so as to move your neurons when playing with a Pro Controller or Joy-Con grip. (Single Joy-Con play is supported, in the sense that you either have one in each hand to play by yourself, or you give one to a friend, as playing the game with just the one isn’t supported.) But that’s it, which means although it is very minimal, there’s very little for you to remember, so at least there’s no getting stuck into the game’s 58 puzzles, with each puzzle abiding by the same rule, getting both neurons to the circular goal in their retrospective dimensions.

In the earlier levels, such things are easily done by waltzing over to the goal, whilst avoiding the beam of light, aka guard, which will respawn the neuron that tried to pass through it/caught in its rays, back at the beginning of the level where that particular neuron spawned, with your progress intact. But the heat soon gets turned up when power-ups become available as in addition to a sonar like item that attacks the guards, causing them to move and check out where the sound originated from, there are also items that make cross-dimensional travel possible, so while the blue neuron starts of in the blue environment, he can traverse the orange dimension, but will need to return should you wish to finish the level.

But cross-dimensional travel is not easy. In fact it can easily get confusing, especially when on the levels where you do have to move both neurons as the same time in opposite directions and while some can handle some puzzles without any help from the other, there are many that will require them to help each other and while the easy thing to do is to play with a friend to make Semispheres easier, it is rewarding to solve a tediously difficult puzzle by yourself if you stick it out long enough. (Especially when it means that by sticking around a little bit longer instead of rage-quitting, you can enjoy the delightfully simulating soundtrack that was composed by Sid Barnhoorn)

Aside from all that I’ve stated above that’s pretty much it as far as Semisphers goes as it is a minimal game that doesn’t even have a title menu, but why it may be a game that sees the whole “less is more approach,” there is one thing the Switch version the others don’t and that is an inverted colour scheme. Instead of Orange and Blue, the colours have been swapped so that they are Blue and Orange, so as to “match” the placing of the Neon Blue and Neon Red Joy-Con controllers on a Nintendo Switch. Yes Orange and Neon Red are not the same colour, but it’s the thought that counts. It is a shame there isn’t more to Semispheres as this award winning game, does feel as if it isn’t reaching its full potential, but it’s certainly a game that makes its developer one worth keeping an eye on.

Having completed Semispheres in a single sitting playing by myself and then doing the same again with a Player 2, Semispheres is a game that has me divided. I am in awe of how surreal the experience is, thanks to the visuals and Sid Barnhoorn’s glorious soundtrack, but it is not a game I can see myself going back to any time soon. It’s not a bad game, as it is worth its asking price, but with so many other titles available on Switch, the “replay value” it has, is easily diminished every time a new game comes out, which is practically multiple times a week. So although it is not my intention to make you never try this game, Semispheres is the kind of game you’ll probably only play once, so you will need to be prepared for that before forking out $9.99 US dollars.