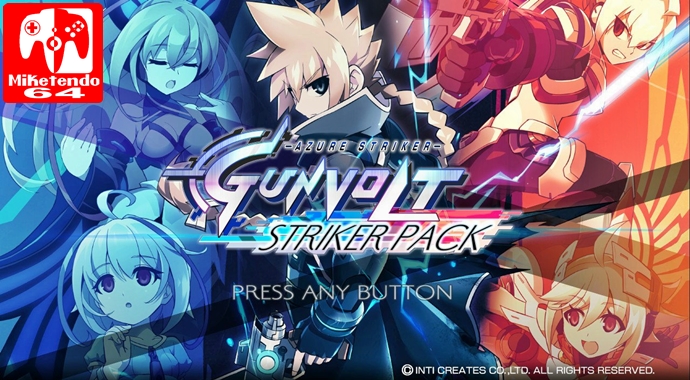 Granted Mario + Rabbids is the biggest game to launch on Nintendo Switch this month, there are still a few hard hitters coming to the console and one such hitter comes twice fold, thanks to the Azure Striker Gunvolt: Striker Pack!

While Inti Creates’ Azure Striker Gunvolt series is a fairly popular one, due to being in such high demand on Nintendo 3DS systems, there are still plenty of gamers out there who either know its name, but know nothing about it, or just know absolutely nothing about the franchise. So for those reasons, before I review the “game” as such, I’m actually going to dedicate a couple of paragraphs as to what Azure Striker Gunvolt is and explain just what it is the Switch version has to offer. Also while this is a review, let the record show the review is more focused on the actual pack than the two individual games and now we can get things rolling.

First and foremost, Azure Striker Gunvolt is a series of action side-scrolling platformer games, developed and published by the Japan based Inti Creates, which was founded back in 1996 former Capcom staff. Whether intentional or not, because of Azure Striker Gunvolt’s utilised gameplay that is similar to Mega Man Zero, time and time again the series has been referred to as being a spiritual successor to Mega Man and that is not a bad thing as the Azure games are both delightful in their own right, with Azure Striker Gunvolt 2 feeling even more so like a Mega Man game.

As for the hero and the setting of the games, set in an unspecified time in the future, the main protagonist is the Azure Striker himself, Gunvolt. Gunvolt is an adept (a superior human who possesses septimal powers that grants some adepts the power of flight, mastery over powerful weapons and some can even manipulate elements like fire.) In Gunvolt’s case, he has power over electricity and prior to quitting QUILL in the first game, he used to be a freedom fighter going against the Sumeragi Group, who on the surface are an organisation that has brought peace to the world, but in reality they’re controlling it and experimenting on adepts.

Only Gunvolt doesn’t remain with QUILL for too long in the game, as he actually leaves the organisation at the end of the first level, due to finding someone who gives him cause to change things, only his efforts to leave his life behind him doesn’t work out, as someone needs to stop the Sumeragi Group and it’s 7 deadly adepts, whom are all based on the 7 deadly sins and there’s no one better at that, than Gunvolt.

For the purpose of this review, this is where I stick a pin in the whole plot/setting thing, purely because a lot of the game’s story should be played and experienced, as opposed to just read online, so instead we’re going dance and skip right into the next topic of discussion and that is price and content. So while the retail version is not available for purchase right now, the digital version sure is and for the price of $39.99, you’ll be delighted to know you will be getting your money’s worth thanks to the fact that the pack does contain both Azure games.

It has all the DLC packed in, which means more levels and boss battles at no extra cost. Yacht Club Games’ Shovel Knight amiibo can still be used with Azure Striker Gunvolt 2, which means Gunvolt or Copen can take on the notorious knight of shovelry in a deadly 1-on-1 battle. It also runs both games at 60 FPS, has a new track sung by the character Lumen, upgraded UI and high resolution event graphics, so it’s not just a port of the 3DS version, it’s everything the 3DS Striker Pack could have been, but never had the chance to be, until now.

What I like most about the Striker Pack though, is the fact players are not restricted with what game they play first. If you wish to play Azure Striker Gunvolt 2 and then play the first one, you can as the choice is yours, but let’s be real for a second and state the obvious. If you are going to buy the pack, you would be better off playing the games in their chronological order, especially since the setting to the sequel carries on from where the first one left off, which if you get the true ending, is a wounded and heartbroken Gunvolt having to come to terms with a terrible fate. Only there is no real time to grieve, adapt and heal up, as the battle he had against the Sumeragi Group and its deadly adepts is nothing against the new threat he has in the form of Eden. The good news however, is Gunvolt isn’t alone in the fight, as the human warrior Copen from the first game, has it in for the new organisation as well.

With regards to gameplay, it is essentially the same for both titles. As Gunvolt’s controls and skills are almost completely the same on both, except Azure Striker Gunvolt 2 also allows you to play as Copen, who has his own way of doing things and his own set of skills. For example, whereas Gunvolt uses his gun to lock onto enemies and then fries them with his electrical powers, Copen locks onto them with his dash, and uses bullets to put them down. Copen can also obtain new powers by defeating the bosses and taking a new power from them, which is a mechanic we’ve previously seen in the Mega Man series.

As for the rest of the time, gameplay is the same both titles. There are a set number of stages to be played and explored with checkpoints here and there, so that should Gunvolt and Copen meet their end, they can respawn at the previous battle. There are tons of enemies to be killed, all of whom give you points, which counts towards your overall score once the level is over. There are really fantastic battles at play, which will kill you many, many times if you’re not paying attention or are just taking things for granted and there’s even lots of items to collect.

Sure every game has a collectible or two, but with the Azure Stiker Gunvolt games, some items can help you get the secret ending to the first game, upgrades for your weaponry, or power-up the skills and powers Copen and Gunvolt can acquire/learn. As for other things the games have in common, there is no autosave feature, so saving needs to be manually done in-between stages, when hanging out in the characters’ abode, where they can talk to their younger female companions and give them gifts. Also both games support a level up system, which strengthens your playable character for the challenges that await them.

If the gameplay sounds simple, it’s because it is. It features mechanics and modes of players that fans of platformer games and video games in general, have seen time and time again, which means, as long as you have played at least three kinds of video games, you will have no issues adjusting to the 2D pleasures the Striker Pack has to offer. After all, sometimes the best way to do something, is to keep it simple and in the instance of synthing items, levelling up, level ranks at the end of levels and general combat, you only need to play for 10 minutes to get a code idea as to how everything works, which means after those 10 minutes, every minute after is a minute spent in bliss!

If you are looking for a super-charged platformer, packed with action and replay value, Azure Striker Gunvolt: Striker Pack has it in spades. It also has a fantastic soundtrack, is a game worthy of being played anytime, anywhere, for any reason and can honestly not be packaged any better than how it is now. It’s not just a pack with one game that needs to be played on the Nintendo Switch, it’s a pack that has two games that deserve the attention of Switch owners and Mario + Rabbids are not your thing, than Striker Park is a decent alternative must-buy for this week.