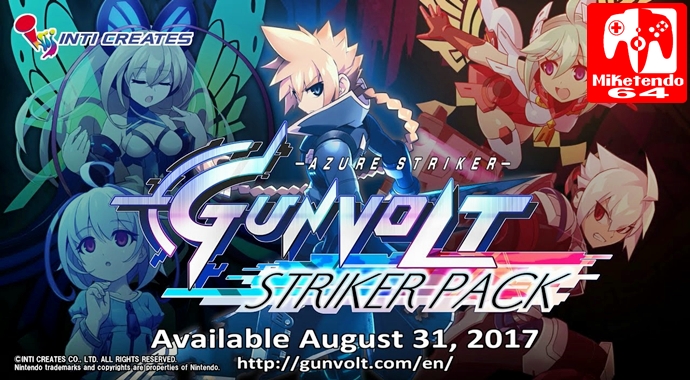 For anyone in Europe or North America who doesn’t want to settle for just getting the digital version of Azure Striker Gunvolt: Striker Pack, the good news is you want have to!

Prepare to jump into one of the most electrifying 2D platformers out there as Azure Striker Gunvolt: Striker Pack is heading for the Nintendo Switch eShop on August 31st, with a newly announced physical release coming to North American and European retailers this fall. This two-in- one package features both Nintendo 3DS classics, Azure Striker Gunvolt and Azure Striker Gunvolt 2, now with all-new enhancements and fully optimized for Nintendo Switch. Players can also explore the entire catalogue of downloadable content (DLC) for both games, which comes pre-loaded in the pack and introduces extra stages, bosses, bonus modes, and songs.

“The Nintendo Switch is such a fun and versatile system; perfect for the frenetic action of a 2D platformer,” said Matt Papa, Producer at Inti Creates. “This new edition offers great content for existing and incoming fans of the series, and now everyone can enjoy the complete Gunvolt experience on the big screen at home, or on the go.”

This critically acclaimed series has intuitive controls, memorable characters, and shockingly epic boss battles. Play as Gunvolt, zipping and zapping your way through levels and skill trials by tagging enemies with your weapon, then shocking them into oblivion. In Gunvolt 2, enjoy the game in an entirely new way with the addition of Gunvolt’s rival Copen as a playable character. Playing as Copen, you can dash through the air, slam into enemies, and unleash devastating homing shots to make short work of your enemies.

In the Azure Striker Gunvolt: Striker Pack, players will:

Azure Striker Gunvolt: Striker Pack will be available digitally and at retailers in North America for $39.99, with equivalent pricing in Europe.

In addition to the press release, Inti Creates also sent us a digital copy of the upcoming Switch release, which we’re aiming to put out the very day Azure Striker Gunvolt: Striker Pack releases, so we hope you look forward to seeing what we have to say about it..