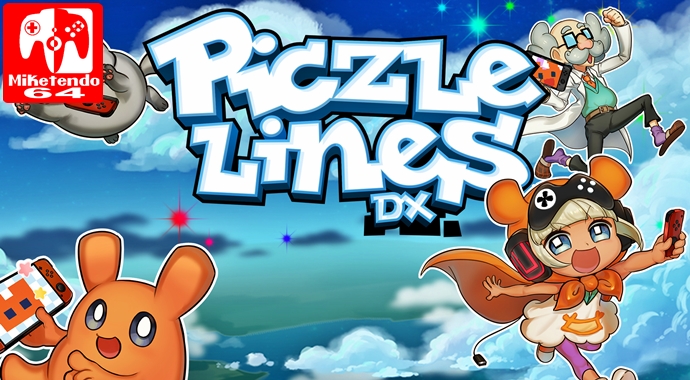 When Piczle Lines DX experienced its first lease of life, it was as a connect-the-dots puzzle game sequel to Piczle Lines, made and developed for mobile devices, but thanks to Japan based publisher Rainy Frog Games, Piczle Lines DX is back and it’s on Switch.

Developed by Score Studios and made with Unreal Engine, Piczle Lines DX is the latest puzzle game to hit the Nintendo Switch and believe it or not, but it is without a doubt one of the better puzzles games on Switch. Sure the smart device version may be free to download with plenty of additional puzzles that you can purchase compared to the Switch version that costs $14.99, but the Switch version is not without promise!

So before I even get round to telling you how Piczle Lines DX plays, I’m going to tell you exactly what it is your money will get you. Firstly for $14.99 you can purchase a delightfully charming puzzle game that has 320 puzzles to be played completed. 320 puzzles that are divided across 2 modes. The first being Story Mode, which is made up of 5 Chapters with each chapter made up of 20 puzzles, whereas the other 220 puzzles await you in Puzzle Mode and while there are some you will complete in mere minutes, since the grid size is only 7×7, Piczle Lines DX can soon turn up the heat thanks to puzzles that are so big that their grids are 128×128.

But if 320 puzzles aren’t enough for you, plenty of updates are planned for Piczle Lines DX on Switch and some are already in the works. Furthermore these additional updates will be free, so while extra puzzles for Piczle Lines DX on mobile devices requiring purchasing, with Switch, it is just a one-time purchase. Also you’d actually save yourself money purchasing the Switch game, instead of going mobile as although the mobile version is free to download, if you add up all the costs for the available packs, the Switch version the cheaper version and no matter what way you look at it, that’s a plus!

Another good thing the Switch version has going for it, is while it supports touch-screen controls like its original incarnation does, it can be played with the likes of buttons and analogue sticks, which means if you want to ditch Handheld mode in favour of TV mode and a Pro Controller, you absolutely can and the one player game, swiftly becomes a game a group of people can play! How? Well, you and your puzzle loving pals can then sit crowded around the TV, taking in the action, as you take it in turns to solve the puzzle and complete the image, or put your heads together and work as a team. Or, you can just play it on your own and solve everything by you own merit.

However you choose to play it though, Piczle Lines DX is packed with content and it even has in-game achievements as well for gamers who like to accomplish certain goals when playing video games. As for the goals players can accomplish as far as Piczle Lines DX is concerned, there’s quite a list. There’s a Bronze Cup that can be earned by clearing 10 puzzles, a Platinum Cup that can be achieved by clearing 250 puzzles and 5 trophies that can be acquired by completing each chapter in Story Mode. If you’re a real puzzle solving, achievement seeking pro though, you’ll set out to get the “Too Much Spare Time” trophy, which requires you to complete a humongous puzzle and then reset it so you can do it again.

On a somewhat sad note though, there does seem to be a bit of a bug or glitch at play, as two of the easiest trophies to get are anything but. While the Boffin trophy only requires you to check out the game’s tutorial, doing so did not unlock the trophy for me and two other reviewers I have spoken to and there is also a trophy that requires you to simply check out the game’s credits, but this one also doesn’t work. The good news however is that the issues I mentioned above, are pretty much the games only actual issue and even then they are absolutely minor and something that can be easily fixed as part of an update.

Okay sure, the games music can be a little much, especially when you find yourself on a puzzle is proving too much and the tune in the background is a little too and addictive, but of course it’s addictive, the whole game is. While you can say it is a simple enough game, it is very, very addictive and a game you can pick up and leave as you wish as the puzzles you’ll encounter and play in Puzzle Mode can be played and left, only to resume filling them out a few hours later. I do however wish there was some more variety to the music as I feel that would have benefited the game, but now because I have put it off long enough, let’s talk gameplay!

The object of PICture puzZLE game Piczle Lines DX is to essentially connect dots of the same colour and number, by drawing a line from dot to another and to keep on doing this until the puzzle is completed and its hidden image is hidden no more. As for how to draw the line, which can go in any direction, but can never cross over, you can do so by holding the ZL or ZL buttons and moving the analog stick, or do it all by feel and use your finger to trace a line on the screen. A line which if wrong, can be deleted by tapping it twice, or just pressing the action button twice.

Now, the line can only be as long as the dot your drawing the line from, so if it is a red 3, the actual dot counts as 1 so you can only move the line across a single space for 2 before connecting it into another red dot with the number 3 on it, represented by the number 3. Also just because some puzzles are small to start with, not every puzzle fits easily on the screen, so be prepared to outwards pinch the screen to zoom out (or hold the X button,) or give yourself a better look by zooming in by pinching, or holding Y. As for scrolling across, you can swipe, or use the left analog stick and tap the L or R buttons to scroll even quicker. So yes, gameplay is simple and very easy to remember and because I have yet to mention the goings of the Story Mode, it is time I corrected that.

While a story is not really necessary, Piczle Lines DX, does in fact have one and it revolves around the characters Score (aka Score-chan,) Gig (Gigi) and Professor Matrix. The Professor is pleased to show off his latest invention, the Piczle-Matic 3000, which can turn everything into pixels. Only Score gets her hands on it and suffice to say, she destroys the lab by turning everything into picture puzzles, resulting in players needing to complete the puzzles to return the objects back to the lab and while everything gets sorted there, it’s not long before everything else is turned reverted to pixels.

Given how long some chapters can take to clear, it is easy to lost track of what is going on with the story, but the good news is, every last animated scene of it, can be viewed at any time, provided you’ve watched it before when playing through its associated chapter and while its nor the mind blowing story a lot of fans are expecting these days from every game, it does in fact have one and it does do a good enough job at explaining why the things that happened.

If you’re the kind of gamer who is after a puzzle game that features an “animated” Story Mode, lots of content and is just a whole lot of fun to play, you can’t do much better than Piczle Lines DX. It’s smart, it’s charming and these facts are crystal clear to all who play it. But if it is still not to your liking after everything I’ve said in this review, you could always check out Puzzle Adventure Blockle, as it is yet another great puzzle game on Nintendo Switch!