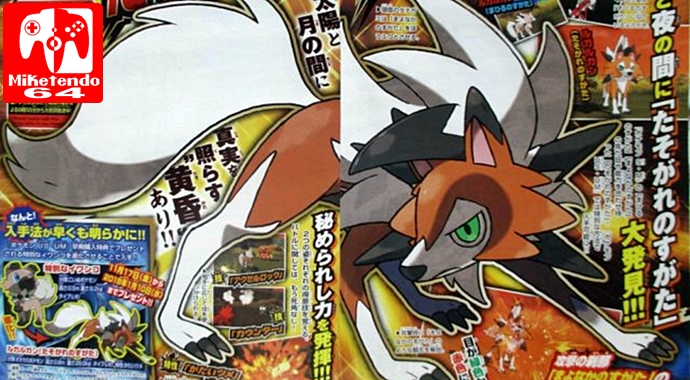 The Secrets of Alola! Dusk Lycanroc can Only be Acquired via a Special Rockruff Distribution

The Dusk Lycanroc cat is out of the bag and with the latest issue of CoroCoro now properly out, so is new information regarding the new form.

For starters, Dusk Rockruff is a pure Rock-type so anyone who believed it to be a Fire and Rock type, I’m sorry but you’re wrong. Dusk Rockruff is 2’07/0.8 meters tall, weighs 55.1 lbs/25 kg and can only be acquired via a special Rockruff distribution, so if you hoped to be able to acquire one via normal gameplay, then that’s not going to happen.

It has been said that upon the release of Pokémon Ultra Sun and Pokémon Ultra Moon on November 17th that a special Rockruff will be distributed as a tie-in and when it evolves, it will evolve into Dusk Lycanrock. The distribution is said to end on the 10th of January, 2018.

Also, Dusk Lycanroc has the ability Tough Claws and can learn the moves Accelrock and Counter and it’s been confirmed its eyes do go red like Midnight Lycanroc’s, when it unleashes “it’s fighting spirit.”

Just as soon as we learn any more about this Ultra version of Lycanroc, we’ll be sure to share it.